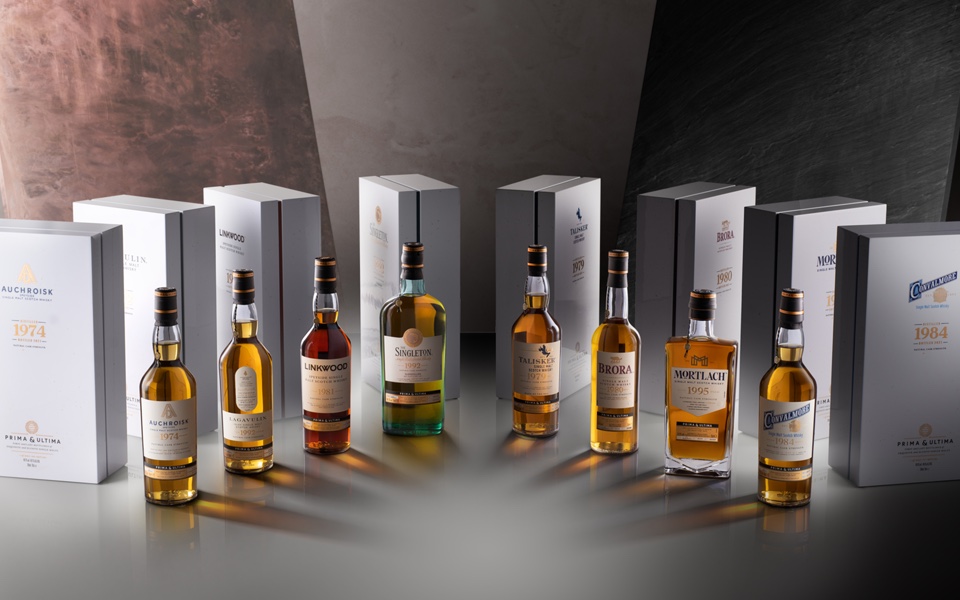 “Prime” and “ultimate” connote excellence, but they also mean first and last. Diageo’s Prima & Ultima collections play with that ambiguity, by bringing together a selection of exquisite single malt whisky, which are also the first or last of their kind.

The age and rarity of these spirits would make them enticing enough, but each collection is curated by one of Diageo’s master blenders, who contextualise their choices with stories that highlight the heritage and artistry that goes into each bottle. Last year’s inaugural collection was selected by Jim Beveridge and this year the honour has fallen to Maureen Robinson.

Robinson has worked with Diageo for more than 40 years, and when putting together her collection she was able to draw on the resources of the more than two-dozen distilleries that the company operates across Scotland, as well as remaining stock from others that have been closed for years.

There are eight whiskies in the collection – four firsts and four lasts – and they demonstrate the range of styles and regions available within the portfolio, offering collectors an opportunity to travel through diverse flavour profiles and over three decades of single malt history.

Robinson is recognised within the industry as an expert in the secondary fermentation of high-aged whiskies, so it is not surprising that she has chosen some exciting one-off experiments with unusual casks. But her interests are not narrowly focused, so within the collection any lover of single malts will find multiple bottles to their taste – if not the whole set. She observes, “This is a selection of very special single malts – some that have never before seen the light of day and others that are the fleeting and final examples of their kind. Each bottling shares a glimpse into the history of Scotch and one that I am honoured to have witnessed in person.”

All of the spirits were non-chill filtered, then bottled without additional colourings at natural cask strength. A full set of this year’s Prima & Ultima single malts consists of eight 700ml bottles, and comes with a 20ml sample of each whisky, a complimentary set of eight glasses that have been engraved with unique designs intended to represent the story behind each cask, and a booklet giving Robinson’s account of the collection.

Also Read:
Why whisky and walking makes for a wonderful weekend

The booklet presents these whiskies from Robinson’s personal perspective, informed by her long career. As she notes, “Some of these casks I helped to lay down, and have taken great pleasure in tending to them since, so I chose them with rich memories in mind. Each has its own unique style, which you can now explore for yourself.”

In a collection brimming with unique spirits, the 47-year-old Auchroisk stands out. It is a remarkable whisky, with complexity which comes in waves. But beyond the gustatory experience, it provides a novel opportunity to sample the first cask from a distillery at such an advanced age. Robinson reveals her own prescience when she says, “I remember choosing to hold back the cask filled at Auchroisk knowing it would be special for the future.”

Everyone will have their own particular favourites within the collection. Robinson herself was excited anticipating the results of the maturation trials that they had undertaken with the Linkwood and Singleton releases. I loved the perhaps counter-intuitive influence of the freshly charred American oak on the Lagavulin, muting its signature peated smoke, and allowing other flavours to come through. The Brora too was stunning; a shining example of the recently revived ghost distillery’s style of peated Highland malt. The facility was mothballed in 1983, but following substantial renovations it returned to production this May. The Brora in this collection will have you clamouring to see what they have coming in their new iteration.

For me, however, the Convalmore was the star of the show. The Convalmore distillery closed in 1985, and there is vanishingly little of its stock left. Like Brora and Clynelish, Convalmore is known for its waxiness. That flavour is evident here, but it comes bursting with tropical fruit flavours, including a generous floral hit of lychee, which makes it a real one of a kind. The fact that the barrels were filled on the day of a total solar eclipse just adds to the mystique.

Just 376 full sets of the Prima & Ultima Second Release will be made available for purchase world wide. Individual bottles of some of the whiskies in the collection may be available from Diageo’s exclusive appointed agents, at a later date. In the UK the full set will have a recommended retail price of £23,500 (including tax and duty). An online registration page is now open, so if you want the opportunity to add this magnificent collection to your own, you should register your interest no later than Monday 23 August.

If you miss out on registration, you still have a chance, because set #1 will be sold by Sotheby’s in Hong Kong, in an online auction taking place from 15 to 24 September. All proceeds of the sale will go to the humanitarian charity CARE International. Whoever succeeds in the auction will receive not only the #1 set of the Prima & Ultima Second Release, with each bottle signed by Robinson, they will also be invited to meet her at the revived Brora Distillery, in the far north of Scotland, to sample some of the remaining pre-closure reserves.