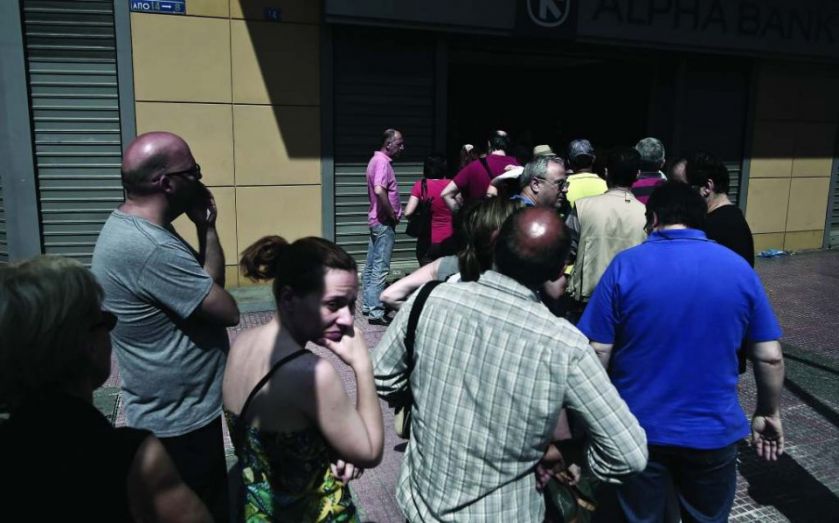 Greek banks will be closed today and could be shut for the rest of the week as months of negotiations between Greece and its bailout monitors culminated in a stalemate, leading to a cut off in emergency lending to the country’s banks.
The market reaction was swift, with the value of the euro diving in early morning trading in Asia. The euro dropped more than 1.5 per cent against the US dollar to below $1.0979, compared to a close of $1.1167 against the dollar on Friday. It fell as much as 2.5 per cent against the Japanese yen.
Other market data last night also pointed toward a sharp drop in global stock markets today.
The Syriza government announced yesterday that the Athens Stock Exchange will be closed today, preventing traders from buying and selling Greek-listed securities.
The UK foreign office has warned Brits travelling to Greece to take extra cash with them as ATMs and bank services could become limited at short notice. It also urged tourists to avoid all public demonstrations and warned of a threat of political violence. Riot police were yesterday stationed outside the Greek parliament amid rising tensions in the country.  It follows a weekend of panic across Greece as thousands continued to flock to cash machines to make last minute withdrawals before limits are put in place.
Greek banks have seen billions of euros of deposits withdrawn this year, with the money being replenished by so-called emergency liquidity assistance (ELA) from the Bank of Greece, with a cap imposed by the European Central Bank (ECB).
The ECB has maintained that lifting the cap on ELA depends on whether a cash-for-reforms bailout deal is struck between Greece’s coalition government and its bailout monitors by tomorrow. But the ECB finally lost patience yesterday after a turbulent weekend and refused to permit more lending to the banks.
Greek Prime Minister Alexis Tsipras called a surprise referendum on the latest bailout deal proposed by its creditors on Friday after talks broke down between the two sides.
The ballot will take place next Sunday and will ask the people of Greece: “Do you accept the institutions’ proposal as it was presented to us on 25 June in the Eurogroup?”
Tsipras said: “It is clear that the objective of the Eurogroup’s and ECB’s decisions is to attempt to blackmail the will of the Greek people and to hinder democratic processes, namely holding the referendum.” he said last night. “They will not succeed.”
Tsipras applied for the bailout to be extended past tomorrow’s deadline until after the referendum, which would allow the ECB to keep lifting its ELA cap. This was denied. He has submitted a second request, calling the initial rejection an “insult and a great disgrace to Europe’s democratic traditions.”
Finance minister Yanis Varoufakis remained insistent that Greece would stay in the Eurozone, even in the event of a “no” vote in the referendum. He said the vote was not a ballot on Eurozone membership. “This is your judgement, your opinion, your interpretation. Not ours,” he said.
Share
Tags: Greek debt crisis