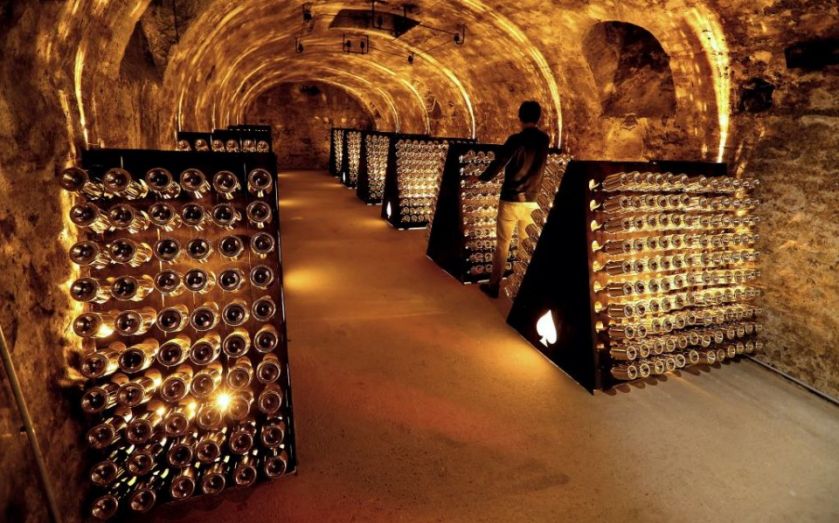 Several years ago, Joel Harrison and Andy Silvester met in a south London pub discussing lower-league football. Fast forward, and Joel is now the co-author of several books on spirits and one of the world’s leading booze writers and creative consultants, and Andy Silvester is City A.M.’s Acting Editor – with a penchant for cocktails and London’s bars. Each week they share what’s getting them excited in the spirits cabinet.

If music is the food of love, then the drink of love is, erm, drink. And with lockdown making romance quite the Sisyphean task, whether we are in a relationship or not, this Valentine’s Day we’ll all need something wet.

When romance and booze are mentioned, there is one drink that springs to mind: Champagne. The pop of the cork from the bottle is the soundtrack to good times – and even better when it’s in a cocktail.

“But Champagne is far too good to be used in a cocktail!” we hear you cry.

Well, admittedly, we have few complaints when it’s simply chilled and poured into a glass.

However, any good chef will tell you that a dish is only as good as the quality of ingredients, and the same is true in mixology.

So embrace Champagne as your best bubbly friend when it comes to making, say, a French 75, a Bucks Fizz, or the wonderfully named Death in the Afternoon. No, not an emo band, but a cocktail created by arch-drinker himself, Ernest Hemingway.

Yet Champagne has some stiff competition, not far from home. English Sparking Wine is plotting something of a revolt to the noble region in France, and the producers, based mostly in the Kent to Dorset corridor, have been making stunningly good bubbly for some time now.

With terroir akin to that in the Champagne region, and a climate that has, over the past couple decades, become much more amenable to grape-growing, even the French are getting in on the game; famous French house Tattinger have acquired land in Kent to start growing grapes.

Names such as Chapel Down, Nyetimber and the excellent Ridgeview might be familiar to you, if you keep a keen eye on such things. But for a bit of a wildcard move along the south-coast to Dorset, to Langham Wine Estate. The David of the sparking wine world took down Goliath’s such as Mumm at the ‘Oscars of Drinks’, the International Wine and Spirits Competition, where in 2020 this tiny producer, with an annual yield of around 50,000 bottles a year, took home the Sparking Wine Producer of the Year. Try their rose bubbly for Valentines Day, or their 2015 vintage Blanc de Blanc any other day of the year. Maybe we have found a bottle too good for a cocktail…

But when it comes to Champagne it is not all about the bubbles on Valentines Day. The only other drink that is allowed to use the term ‘Champagne’ is – good pub quiz answer this one – Cognac. The French brandy uses grapes grown across six different areas, two of which –  Grande Champagne and Petite Champagne – have the same chalky soil as that found in the Champagne region.

Cognac from these regions is considered the cream of the crop, and is seen perfectly in Hine Rare VSOP, where the house draws on grapes grown across both Petite and Grand regions, allowing them to use the term ‘Fine Champagne’.

For something a bit special, try Wiltshire-based Cognac curator Hermitage. The best kept secret in the drinks business, this small company bottles small parcels of extremely old Cognac from across the region. Their inventory boasts bottles from the late 1800s onward.

One classic cocktail that brings together both Champagne and Cognac is the simply named ‘Champagne Cocktail’. To make, place a sugar cube in the base of a Champagne flute. Dash on some Angostura bitters, and add 25ml Cognac and top up with chilled Champagne. Given the assumed relationship between quality of ingredients and quality of the final cocktail, we can’t help but think what  this might be like with Hermitage’s 1880 Grand Champagne cognac and Charles Heidsieck 2006 Blanc des Millenaires. For a more reasonable option, try Moet Ice Impérial and Hennessy XO.

For an eye-opening kickoff to Valentine’s weekend, you can’t beat the refreshing notes of a French 75 – just a soixante-quinze in France, if we ever get the chance to go again. Simply add a squeeze of lemon juice, about 5ml into a Champagne glass, along with 20ml of gin, a dash of sugar syrup, and top up with cold Champagne. The key here is to get the balance of sweetness and acidity from the lemon juice correct. For a romantic pink hue, use a good pink gin such as the one from Finland’s Kyro distillery.

PS… Valentine’s Day isn’t the only celebration this weekend. Today is Lunar New Year, bringing in the Year of the Ox. Glenfiddich are throwing themselves into the celebrations, releasing the second of three limited-edition Lunar New Year expressions. This year it’s a spicy, warming 21 year-old, matured in bourbon and sherry casks and finished in Caribbean rum casks. The packaging is designed by the emerging Chinese illustrator Rion Wang, who depicts the return of Glenfiddich founder William Grant’s son-in-law Charles Gordon to Scotland after spreading the good word of whisky across Asia. Available at Whisky Exchange, £145.