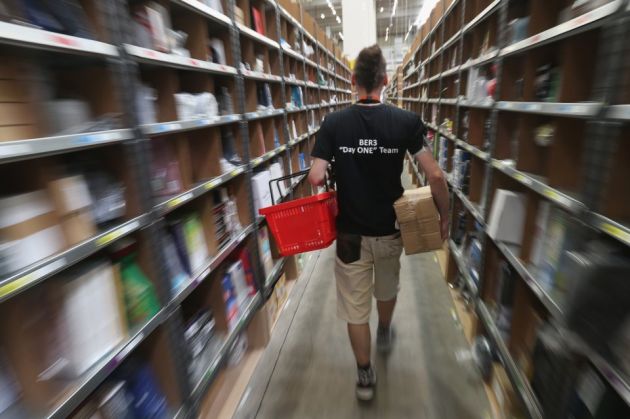 May was a big month for Amazon. Not only did it celebrate the 20th anniversary of its stockmarket floatation, its share price edged past the $1,000 (£776) mark for the first time.

It's not bad going for an internet book-seller that began trading at just under $2 a share. This 49,000%-plus return means anyone who bought $10,000 of shares on 15 May 1997 and then hung on for two decades would now have a holding worth close to $5m.

The thing is, anyone who did that must surely have been shipwrecked on a desert island on 16 May 1996. If not, the investors who have consciously put up with the extreme volatility of Amazon’s share price for all of the last 20 years must be few and far between.

As we observed in our Value Perspective blog post, Long run, Forrest, long run, buying a great stock may be hard but holding on to it is harder.

If you think you could have stomached the ride, just consider some of the numbers in this Irrelevant Investor blog by Michael Batnick. Amazon has seen a 10%-plus peak-to-trough decline in every calendar year since it floated.

Though the change is perhaps not as extreme as some of those ups and downs in its share price, Amazon’s business model is also very different to what it was 20 years ago. It may still sell books – along with pretty much anything else you might want to buy – but its most profitable area of business, cloud-based services, had not even been conceived of when Amazon floated.

This makes Amazon doubly unusual. Not only has it set itself apart from the great majority of technology start-ups by going on to be hugely successful in the first place, it has done so after changing its business model. This is in stark contrast to, say, Facebook and Google, both of which have relied through their history on their commanding market shares of their respective internet segments to drive advertising revenues.

So, while we do not believe anyone could have forecast how well Facebook, Google and indeed Netflix would have done since their respective flotations, you could at least have had a decent guess as to how they would largely have generated any profits.

With Amazon – whose founder Jeff Bezos we actually co-opted into a recent article about the difficulty of predicting the future – even that would have been impossible.

None of which is to suggest there is anything inherently wrong with investing in technology companies. As exciting as the progress of their share price might be, however, investors need to understand that for every Amazon, Facebook, Google or Netflix, there are many, many others businesses that fail.

Put it this way, markets very rarely wait two decades for a company to justify valuations that can often be extremely high.

Speaking of which, Amazon currently trades on a price-to-earnings (P/E) ratio of around 170 times. To offer some context, the main US index, the S&P 500, is currently on 25 times, which is considered to be at the more expensive end of its historical range. Mind you, to offer some more context, Amazon was trading on a P/E ratio of 1,000 times as recently as 2015 and, at one point in 2012, was as high as 3,600 times.

Along with the uncertain nature of the sector, such valuations – traditionally described as "eye-watering" – are a major reason many investors prefer to steer clear of tech companies.

Obviously, as value investors, we will not buy into any stock in the hope its underlying growth in earnings will eventually justify its current valuation – not least because growth is speculative in nature, hard to predict and provides no margin of safety.

In particular, having a suitable margin of safety is a key pillar of any deep value investing strategy and is very important to our own process. Still, that does not mean we value investors will always shy away from the technology sector.

There will always be tech businesses at the opposite end of the spectrum from the Amazons and not all will deserve to be unloved – Cisco, HP Inc and even, in the not so distant past, Microsoft spring to mind as examples here.

Any company can lose its way or go through a rough patch but, providing we have the expectation it will eventually recover its profits to levels seen in the past, we will be prepared to invest.

Clearly these are not going to be the hot stocks such as the so-called ‘FANG’ quartet mentioned above but there are certainly mature tech businesses currently out of favour with the wider market – trading on a much more value-friendly P/E ratio of around 12 times – and we would expect their market valuations to improve over the longer term.

Simon Adler is an author on The Value Perspective, a blog about value investing. It is a long-term investing approach which focuses on exploiting swings in stock market sentiment, targeting companies which are valued at less than their true worth and waiting for a correction.
Click and enter your email to get a weekly round-up of investment ideas