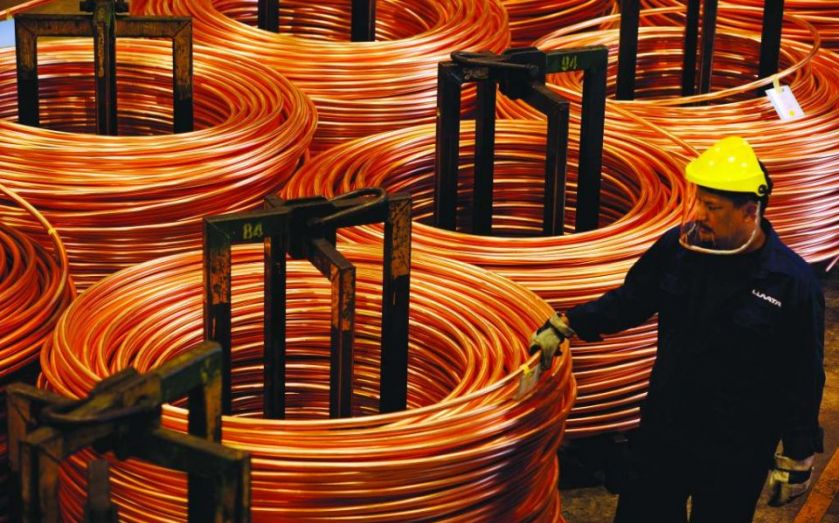 Copper prices are at five-year lows and experts are divided over whether the industrial metal has further to fall – or is due for a rebound. In the last week traders have been going short copper in droves – betting the price will fall and making money when it does. US traders held net short positions of 33,385 futures and options contracts last week, according to US government data. So why the bearish outlook?

Since reaching record levels in 2011 at the peak of China’s industrial boom, the copper price has been sliding. Copper is crucial for infrastructure and industry, as it conducts electricity and is used for pipes and wires.
Because it is so widely used, it is known as “Dr Copper” and its price is believed to reflect the health of the global economy. As such, low prices tend to signal a negative outlook for industrial activity around the world.
At the moment, copper supply is exceeding demand. Weak spots in the global economy including the  Eurozone and Brazil – which was previously a large consumer of commodities but is now heading for a prolonged recession ­– are contributing to a poor outlook for demand.

But investors have also been selling out of copper because of weak economic data from China, which still consumes 40 per cent of the copper that’s mined, although estimates suggest this is around 4 per cent lower than last year in the first quarter. “We are seeing poorer and poorer manufacturing and trade figures from China, and that is what is fuelling the sell-off in copper,” says David Madden of IG.
The country is also facing the unravelling of a stock market boom that was helped along by “margin” trading, or borrowing money to invest. These margin trades were often collateralised with copper, so as the stock market unwinds so too does an element of copper demand.
Chinese authorities have intervened repeatedly in different parts of the economy, trying to prop things up and limit any negative effects from the slowdown. Madden says this has made traders even more wary about investing in metals such as copper, which are reliant on demand from China.
“It just seems as if the rate of decline [in China’s economy] is actually stepping up, despite the fact that there has been lots of effort made to create a soft landing… Traders in the metal are taking that as a sign that China is having bigger problems than the West actually knows about,” he says.

But some believe copper is due to rise in price from these low levels. The metal has also suffered from general negativity towards commodities. Everything from oil and gold, to wheat and sugar has fallen markedly in price. Last week, the Bloomberg Commodity index touched a 13-year low.
Some experts think copper has been sold off to unfairly low levels, and that the state of the commodities market at the moment is painting a far worse picture of the global economy than is actually the case.
“There is a lot of negative sentiment surrounding not just copper but commodities generally. I don’t think it reflects the underlying fundamentals,” says Martin Arnold of ETF Securities. He expects prices to rise towards the end of this year and beyond, because over-supply will not turn out to be as great as expected, nor demand so weak as people are forecasting. When prices are this low it doesn’t make economic sense for mining companies to take as much copper out of the ground, which means they produce less and there is a smaller amount on the world market. For its part, China is still growing at a considerable pace – 7 per cent annualised at the last report. It will still demand a considerable amount of copper.
Whichever argument seems more compelling, investors can go long or short copper either through an exchange traded fund (ETF) or with a spreadbetter. One possibility is ETFS Copper, a vanilla strategy tracking the copper price which costs 0.49 per cent per year.