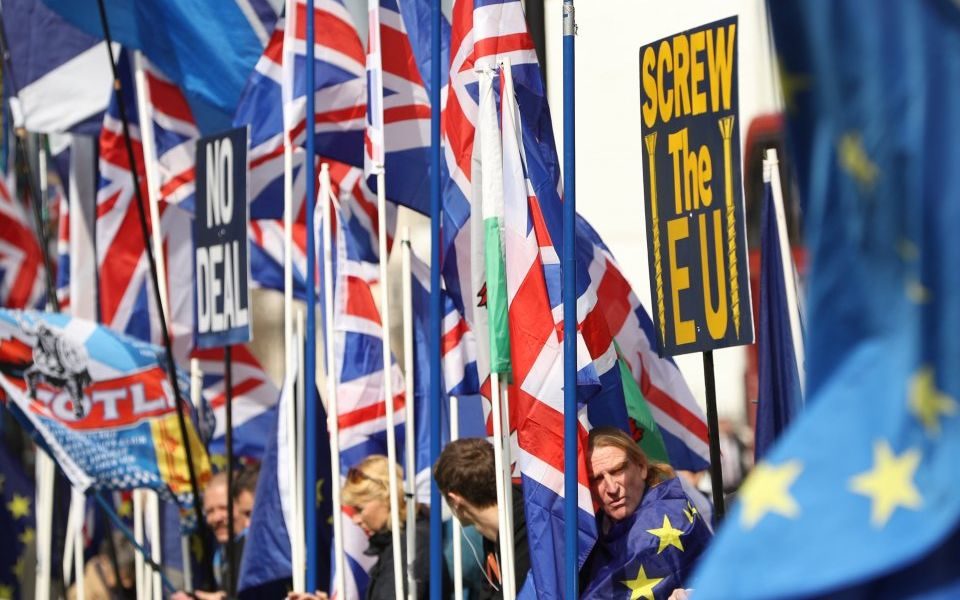 Welcome to our Brexit live blog.

Please manually refresh this page for the latest updates.

Follow this page throughout the day for the latest Brexit news as the world reacts to yet another day of deadlock in parliament. MPs failed to reach a majority last night on a series of indicative votes intended to provide an alternative to the the Theresa May's withdrawal deal, while the PM vowed to resign before the next stage of negotiations if her withdrawal deal is passed.

– May promises to stand down if deal is passed
– Indicative votes fail to break the deadlock, with no options commanding a majority
– EU has agreed to a delay of 22 May with a deal, or 12 April without a deal

5.00pm: MPs will get another vote on May's deal tomorrow

MPs will get another vote on Theresa May’s Brexit deal tomorrow, as the government drops part of the deal to get around a decision from the speaker.

“I am pleased to report to the house that the government’s motion for tomorrow’s debate complies with the tests … that motions which are the same, or substantially the same must not be put to the house more than once in a parliamentary session,” speaker of the house John Bercow told MPs.

May managed to get around the rules by dropping the political declaration part of her deal, Bercow said. Tomorrow’s motion will only be on the withdrawal agreement.

The motion tomorrow to “relating to the UK’s withdrawal from the European Union” is reportedly set to split off the withdrawal agreement element of Theresa May’s unpopular Brexit deal in order to make it more palatable to MPs.

But Labour’s shadow Brexit secretary, Keir Starmer, has said such a move would lead to the “blindest of blindfold Brexits”.

Any vote to pass May’s withdrawal agreement could see the UK leave the EU on 22 May, instead of its current 12 April deadline.

May’s Brexit deal has proven unpopular due to an element that could tie the UK into a customs union with the EU that the UK cannot leave unilaterally.

Sterling has slipped further on the confusion surrounding Brexit.

All bets are off on the next steps in the UK’s withdrawal process, with the government tabling a motion tomorrow without giving MPs any clarity on what will be voted on.

However, reports suggest the government now plans to separate Theresa May’s withdrawal agreement from the UK’s future trading relationship with the EU.

This would lead to the “blindest of blindfold Brexits”, Labour MP Sir Keir Starmer said this afternoon.

However, May might hope it proves to be a way around MPs’ objections to her deal – which chiefly concern the risk that the UK will be stuck in a customs union with the EU.

That’s because the deal includes a measure known as the so-called Irish backstop – designed to prevent a hard border on the island of Ireland.

If future negotiators opt for a Norway-style deal or a Canada-style trading relationship with the bloc, or even trade on WTO terms, they “must include as a starting point the withdrawal agreement that has been negotiated with the EU”, he said.

May has vowed to step aside if MPs back her deal in a last-ditch bid to persuade parliament to approve it.

Reports suggest Downing Street may put a vote to parliament that sees MPs decide on Prime Minister Theresa May’s withdrawal agreement alone without taking into account the UK’s future relationship with the bloc.

There will be no meaningful vote tomorrow, Downing Street has reportedly said, as speculation that the Prime Minister may put her deal to MPs for a third time.

Suggestions that Theresa May will ask parliament to vote on her withdrawal agreement tomorrow came after Commons leader Andrea Leadsom shared tomorrow’s order of business.

The order papers stated that “a motion relating to the UK’s withdrawal from the European Union” is due to take place tomorrow.

However, political sources speaking to Press Association and Sky News have poured cold water on the idea that May will seek a third meaningful vote after two heavy defeats in December and March.

But the BBC’s Laura Kuenssberg said there is still likely to be a vote, though nobody is expected to know for certain before a decision must be made at 5pm.

Earlier this week May abandoned a third vote on her deal due to a lack of support, and since then the DUP has ruled out supporting it.

Sterling fell today despite signs that Theresa May will try to revive her Brexit deal for a third pass at parliament.

The pound dropped 0.5 per cent against the dollar and the euro amid expectations the Prime Minister’s deal will be shot down again by MPs.

Despite May vowing to quit in order to persuade party colleagues to support her withdrawal agreement, the DUP has said it is still minded to abstain from a vote on the deal.

Even so, it appeared that the Prime Minister will proceed with efforts for a third vote, according to Commons leader Andrea Leadsom.

The business for next week will be: (1/2) pic.twitter.com/jxdKMbfQBU

A fresh debate on “a motion relating to the UK’s withdrawal from the European Union” is due to take place tomorrow, she said.

The BBC’s Laura Kuenssberg tweeted: “Not v clear exactly what vote tmrw will be on – might just be on the divorce deal rather than whole package agreed with the EU.”

Commons speaker John Bercow has promised to block an attempt to hold a third meaningful vote, saying a vote on any deal put to parliament must be substantially different from the twice-rejected withdrawal agreement.

Meanwhile Boris Johnson told friends the PM’s deal is dead, according to the Evening Standard yesterday.

Markets speculated that it is unlikely May will get her deal approved, sending the pound down from $1.319 this morning to $1.312 this afternoon.

Connor Campbell, financial analyst at Spreadex, said GBP’s “mood only worsened” after signs yesterday that May’s resignation offer had won round some MPs.

“As sterling staggers blindly through the Brexit maze, the FTSE climbed 0.5 per cent, the UK index pushing above the 7,200 mark it abandoned at the end of last week,” he added.

9.15am: Sterling stuck in Brexit deadlock after indicative votes flop

Sterling remained flat this morning as the euro climbed, after MPs failed to reach a majority on any of last night’s indicative votes on how to proceed with the Brexit negotiations.

Connor Campbell, analyst at Spreadex, said the pound’s struggles were due to the “ongoing, never-ending and seemingly unbreakable sense of confusion and lack of clarity” around Brexit.

Meanwhile in Brussels, ambassadors from the 27 EU member states will meet this morning to debate what their next steps will be. On the agenda will be no deal preparations, amid "concerns" among the rest of the EU that Dublin is not sufficiently prepared.

This from the BBC's Katya Adler:

Ambassadors of the 27 EU countries meet in Brussels this morning to debate the #Brexit What's Next. Will discuss ongoing no deal preparations. Concerns in rest of EU that Dublin hasn't made sufficient preparations /2

No single option out of eight voted on last night by MPs secured a majority, despite widespread opposition to Theressa May’s proposed deal in recent weeks and the PM announcing she would resign before the next stage of negotiations.

May’s deal is, however, slowly winning over MPs, with arch Brexiteers Jacob Rees-Mogg and Boris Johnson coming out in support of it in recent days. Some reports have claimed as many as 40 MPs have been convinced to support the agreement now May has agreed to step down.

All eight alternative Brexit plans have been voted down by MPs.

8.45pm: DUP says it will not back Brexit deal

Foster told Sky News the DUP would not support the deal while it "poses a threat to the integrity of the UK".

6.50pm: Boris Johnson tells ERG he will back May's deal

Former foreign secretary and ardent Brexiter Boris Johnson has told the Tory party's European Research Group he will switch allegiances and back the Prime Minister's deal. The abrupt change of tack came after the Prime Minister vowed to resign if her deal passes.

5.30pm: May says she will resign if deal is passed

Theresa May has told her party she will resign as Prime Minister before the next stage of Brexit negotiations in a last-ditch attempt to persuade MPs to back her deal.

May told a packed 1922 Committee she was aware her party wanted “new leadership” for further negotiations and said she would not stand in the way. But she urged Tory MPs to first vote her deal through.

However, Sky News' Beth Rigby says MPs have been told to "clear their diaries" for Friday, indicating hopes that May's deal could still have legs.

NEW: Just been told that Tory MPs have been told to clear their diaries to be available on Friday ?

Commons speaker John Bercow has cast fresh doubt over Theresa May’s hopes for a third vote on her Brexit deal, repeating his decision not to allow “repeat votes”.

Speaking to MPs ahead of a series of indicative votes this evening, Bercow said the government would need to make substantial changes to May’s deal for a third meaningful vote.

Earlier the Prime Minister had suggested meaningful vote three on her withdrawal agreement could occur on Thursday or Friday.

But Bercow said a “notwithstanding” motion would not get past his ban on a third vote on what is essentially the same deal.

“In order that there should be no misunderstanding, I do expect the government to meet the test of change,” he said.

Bercow added that the government “should not seek to circumvent my ruling”.

Earlier May’s cabinet lost a bid to stop tonight’s vote on indicative motions as MPs wrested control of the future direction of Brexit away from the government.

3.31pm: Indicative votes to include no-deal Brexit and second referendum

Commons speaker Bercow has outlined eight indicative votes that will go ahead tonight after the government lost its bid to prevent MPs taking control of the Brexit process.

The UK will leave the EU without a deal on 12 April.

Remain in the EEA and apply to rejoin the European Free Trade Association.

Do not form customs union but find “agreement on new protocols” with regards to the Northern Ireland border and agri-food trade.

Enshrine the aim to forma customs union in legislation.

The UK would seek to negotiate changes to May’s withdrawal agreement and the political declaration to secure Labour’s position, and pass these objectives into law.

Government must hold another referendum before it implements the withdrawal agreement.

Fysh backs a Malthouse Plan B in which the UK would continue EU payments until the end of 2020 and enjoy full access of UK exports to the EU for two years.

2.15pm: Tory MPs will not be whipped on indicative votes this evening

The indicative votes on Brexit scheduled for later this evening will be free votes for Conservative MPs – meaning they will not be whipped by their party to vote in any particular direction.

Conservative MPs James Cartlidge and Kevin Hollinrake tweeted this afternoon that whips had confirmed the votes would be free, and Theresa May’s cabinet would abstain.

But the government still is trying to thwart tonight’s process before it even starts.

Andrea Leadson said in the House of Commons this afternoon the government would vote against this evening’s votes taking place because it “opposes the principle” of the Commons controlling the parliamentary schedule.

Downing Street reportedly briefed lobby journalists after Prime Minister’s Questions the government would whip against a business motion being debated this afternoon, which is required to pass for the indicative votes to happen.

From the Guardian’s Heather Stewart:

However, a motion has already passed allowing a second set of indicative votes to go ahead on Monday, meaning this evening’s votes are also likely to happen as planned.