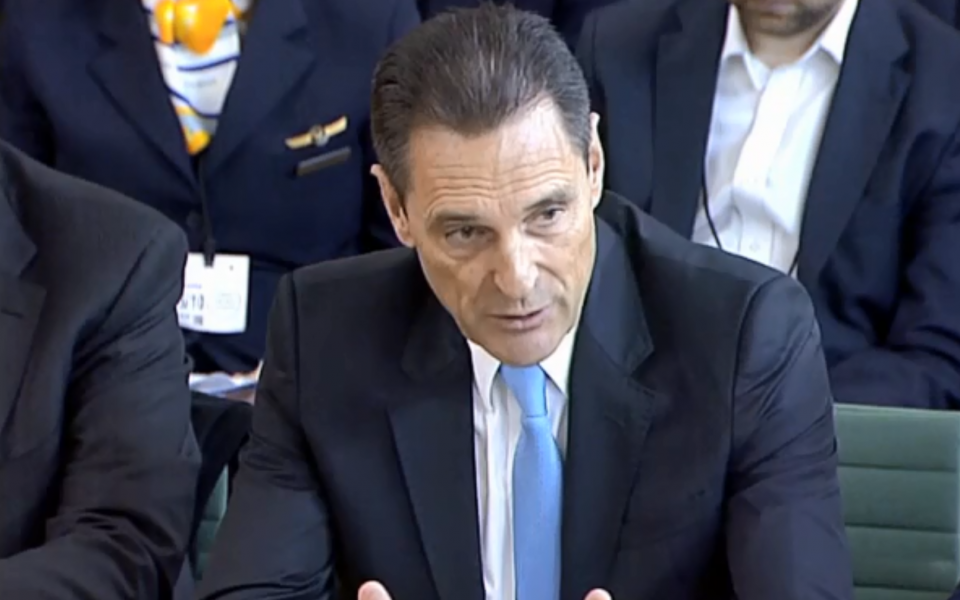 Former Thomas Cook bosses have pointed the finger at the government for failing to stump up emergency cash to keep the firm trading last month, in a heated evidence session with MPs.

Members of the collapsed holiday giant’s board, including chairman Frank Meysman and chief executive Peter Fankhauser, were today hauled in front of MPs for the first time since the company went bust in late September.

Meysman, sitting in front of a group of former Thomas Cook cabin crew workers, said the company had put “a lot of effort” into turning it around, and insisted the government could have done more.

Thomas Cook’s lenders and lead shareholder, Chinese conglomerate Fosun, had committed to a £900m rescue deal, he said. But their condition was that the government provide an extra £200m for security over the coming winter months, where trading is flat for holiday firms, he said.

Reeves said: “You’re a chair of a company that was seeking £1.1bn to stay afloat. You were not successful in getting that money.”

But Meysman responded: “I disagree with that statement.” As former Cook employees could be heard laughing behind him, he added: “I had the backing from the banks and I had a substantive agreement on 28 August from the banks.”

Fankhauser added that a deal was possible until the dying hours before Thomas Cook failed on Sunday 23 September.

He said he would not “dare criticise the government,” but said the plan would have made the firm “the best funded travel company in Europe”.

MPs were shocked to hear the company had not heard from government ministers in the final six says before it went bust, instead communicating with “high officials” at the Department for Transport (DfT).

But later in the day, permanent secretary of the Department for Business, Energy and Industrial Strategy Alex Chisholm said that other countries were scrambling to get up to speed at the last minute, unlike the UK, which was better prepared. “Other countries needed to catch up quickly.”

When asked why the government declined to stump up the money, he said: “The government decided not to intervene with a financial bailout. It felt it was not a situation that was viable and sustainable.”

Business secretary Andrea Leadsom said it would have been throwing “good money after bad”.

But Fankhauser said the government did not want to set a precedent of bailing firms out. He recounted his “awfully sad” phone conversation with a senior DfT official at 5pm on the Sunday the firm collapsed. “I knew I would have to say goodbye.”

Hays Travel – a much smaller family-run business – later came in with an offer to save Thomas Cook’s retail empire of 555 stores, and secure around 2,500 of the firm’s former staff’s jobs.

But Meysman and Fankhauser were told to “have a bit more humility” by Reeves.

MPs said they had been “rewarded for failure,” after directors received £20m in bonuses in Thomas Cook’s final five years of trading.

Bonuses were paid out on the basis of underlying profits, despite billions-of-pounds-worth of exceptional items.

Reeves said the firm had used exceptional items on its balance sheet, collectively worth £1.8bn over eight years, to “make your figures look better”.

“In the end you couldn’t just hide these numbers forever,” she added.

Meysman tried to point to positives such as its joint venture in China with former lead investor Fosun.

But Reeves rounded on him, calling him “deluded”.

She said: “You chaired a business that has gone under because of the decisions made collectively by your management team.”

Meysman went on to describe the day the company went bust as “a tragic day”.

But Reeves later added: “Tragedy speaks of something that is out of your hands.”

“On the contrary, I would say the collapse of Thomas Cook is due to the decisions of the board.”

“I think they do your company proud and I think you should reflect, Mr Fankhauser, on what you can do to put something back to try and say sorry to the people whose jobs you’ve taken from them and whose holidays you’ve ruined.

“You say you’re a reflective man. I hope you will go away and reflect on the huge salaries you’ve earned, salaries that probably in all the lives of some of the people who worked for you will never earn in their while careers, and think about what you can do, not just as a token, but in some way to put right the wrong that you have done.”

She added: “Your failure touches on a lot of other people more, I’m afraid, than it touches on the five of you.

“All of you have given your apologies, but frankly, as we’ve seen time and time again on this select committee, apologies are the easy bit. What is the difficult bit is to actually do something about it.

“To resign from the companies where you are directors today and say ‘do you know what, I’ve got a lot of learning to do before I should be able to have my hands on the tiller of any other company’, and give back some of those huge rewards that you have not earned, Mr Peter Fankhauser, but you have received.”

“I hope all of you will go away and reflect on some of those things and think about the dignity with which some people who worked for Thomas Cook have acted in, and the dignity that I’m afraid we haven’t seen from the board of the company.”