Black Sheep on stirring up the coffee industry, volcanic plantations, and helping the homeless 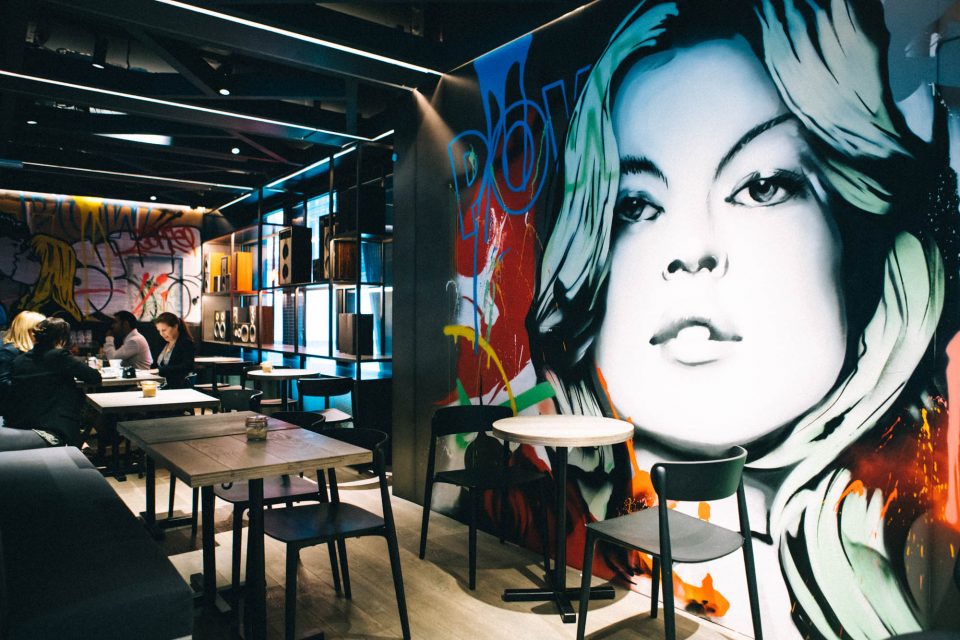 We might be a nation best known for drinking tea, but Brits are increasingly obsessed with coffee. According to market analyst Allegra, we spent a tea-spitting £10.1bn in coffee shops last year.

You can’t walk 100 yards in most town centres without stumbling on a Starbucks, Costa, or Cafe Nero – though, with many coffee connoisseurs preferring to get their caffeine fix from artisan shops, smaller players are certainly stirring things up.

Black Sheep is one of these new breeds, and it’s arguably the trendiest coffee chain in town.

Inside the Leadenhall cafe, where I meet co-founders Gabriel Shohet and Eirik Holth, the walls are speckled with street-art murals and graffiti, while lively music makes it feel more like a bar than a coffee shop.

I spot the pair sitting at a table – dressed casually in jeans and jumpers, these young entrepreneurs seem totally in their element.

In 2013, the two friends – who had been flatmates together at St Andrews University – quit their office jobs and moved to London to start a specialist coffee chain, despite neither of them being from the capital (Shohet is originally from France, while Holth is from Norway).

Full of beans but without financial means, Shohet admits that they didn’t have a plan. “We went to London and slept on couches for a while. We knew we wanted to start a company, but we didn’t have any money, so the first year was rough.”

They managed to secure a startup loan and got grinding – running pop-ups in various locations around central London.

Before long, they had raised £23,000 through a Kickstarter campaign to set up their first permanent kiosk in Aldgate East. There are now 25 Black Sheep kiosks and cafes scattered around the country, the vast majority in London, with two in Manchester.

Reluctant to limit themselves to the UK, Shohet and Holth have already branched out abroad with a store in Manila, Philippines.

Coffee plants obviously go in and out of season, meaning that there are opportune times to harvest in different parts of the world. But with the mainstream brands looking for consistency above all else, most tend to blend their beans, which Shohet argues creates a boring coffee.

“With blended coffee, you don’t know where it’s from and you can’t isolate the taste profile,” he says. “All of our coffees are single origin – we want to celebrate the differences of the beans, so we source coffees depending on the season.”

One of the limited edition coffees during winter is sourced from Tanzania, where a meteorite landed thousands of years ago, which Shohet says makes the soil really rich, affecting the flavour of the beans.

When we started off, Robusta had a bad reputation, because it was produced with very little attention to quality control in the production

“We always look for beans with an interesting story behind them,” he says. “The ones we found in Papua New Guinea grow at the flank of an active volcano.”

The company has also gone against the grain when it comes to the species of bean, unusually offering the stronger-tasting Robusta coffee, as well as Arabica.

“When we started off, Robusta had a bad reputation, because it was produced with very little attention to quality control in the production, and was the favourite for instant coffee producers because it has a bigger yield per acre,” Holth explains.

But he tells me that Robusta has a higher caffeine and protein level, as well as lower acidity and a fuller flavour. Really it’s about giving every customer – coffee geek or not – the full range of choice. “We don’t want to set too many rules on how you drink your coffee,” Holth adds.

I’m told that the chain buys all of its coffee at a multiple of the fair trade threshold. The pair also go to the plantations themselves to buy direct, and do the due diligence on the farms’ drying and washing methods – factors that are increasingly important to Britain’s sustainability-minded coffee lovers.

Sustainability is also factored into single-use coffee cups, which have become a hot topic as pressure mounts on businesses and consumers to help clean up our plastic-riddled planet.

These founders, who were clearly on-trend before anyone had even coined the term “latte levy”, have managed to get rid of plastic at front-of-house, dishing out plant-based, compostable takeaway cups and cutlery instead – something they implemented in the second year of the business.

Making a difference isn’t just limited to how Black Sheep deals with waste either.

Its shops let customers donate their loyalty cards so that homeless people can have free hot drinks. “Some of these men and women can go for days without even making eye-contact with anyone,” says Shohet. “We want to fight social exclusion.”

Homelessness is a growing problem on London’s streets, and while free coffee won’t necessarily fix this, cafes are a way of bringing communities together; it’s more than just coffee.

Though British consumers are feeling the pinch financially, the pair aren’t concerned about customers cutting back on coffee. Holth points out that a £2.50 latte is far cheaper than going to a restaurant, adding: “Coffee is social.”

But the founders also avoid keeping all their beans in one cup. They’re launching an ecommerce platform so customers can buy bags of coffee beans to have at home, and some of their cafes host late night events serving coffee-based cocktails.

With 25,483 coffee shops around the country and the number expected to rise, are the Black Sheep founders worried that the market could end up oversaturated?

Shohet says no, pointing out that, while new shops open, others are closing – or as he suggests, customers flock to Black Sheep, sending mediocre mainstream stores packing.

Competition is definitely hot, but Black Sheep is proving itself by not following the herd.