Middle class coffee fans across the nation were sent reeling yesterday, after Waitrose announced it's no longer going to offer free tea and coffee to myWaitrose card holders in its cafes.

Yep, the dream is over: from 9 February, card holders will have to "purchase a treat" if they want to get their free latte at Waitrose cafes. In the supermarkets, nothing's changed: you'll still have to "shop with us a little (or a lot)", then swipe your card at the checkout to get your free drink.

In an interview at the end of 2013, Waitrose managing director Mark Price said the scheme had caused Waitrose to become "the second-largest provider of coffee in the UK" behind McDonald's. At the moment, it's shifting one million cups of coffee a week.

But fear not, Waitrose fans. The supermarket was keen to emphasise that this doesn't mean the total demise of free coffee. A Waitrose spokesperson pointed out it's a matter of manners:

Most people who have their myWaitrose free drink in the cafe understand that they should buy something to have with their tea or coffee, and so we are simply confirming that.

But what does a world look like where you have to buy "a sandwich, cake or piece of fruit" to have with your drink? Here's what the dog-eat-dog world of coffee retail looks like in the UK today.

1. When you pay full price, Waitrose will be more expensive than rivals 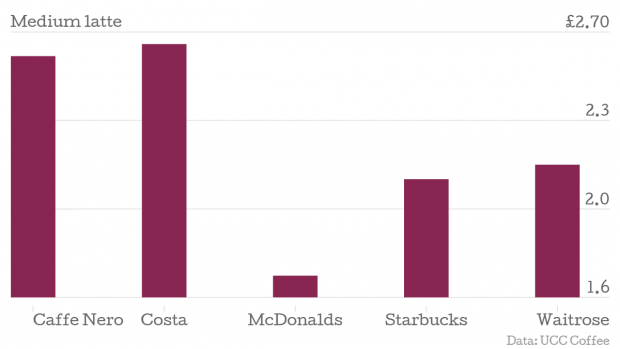 Want to grab a coffee without shelling out for a pastry? Buying a medium latte at Waitrose is going to set you back more than McDonalds or Starbucks – but less than Caffe Nero or Costa Coffee.

2. But supermarkets could stop being the UK's coffee underdogs

According to research by Mintel, Costa continues to be the most popular coffee provider in the UK, followed by independents. Towards the bottom of the scale are supermarkets. But now customers have to pay for something to get a free cup of coffee from a Waitrose cafe, could supermarkets begin to climb the cafe pecking order?

3. And this could make Waitrose one of the UK's biggest cafe chains

Since it announced plans to roll out cafes at the beginning of last year, Waitrose has already opened 120 cafes, making it the UK's fourth largest cafe chain, judging by data from Mintel. If it's selling more, that could increase its roll-out. Could Waitrose be set to become the next Starbucks?

We wonder what "Waitrose Wendy" thinks of all this…