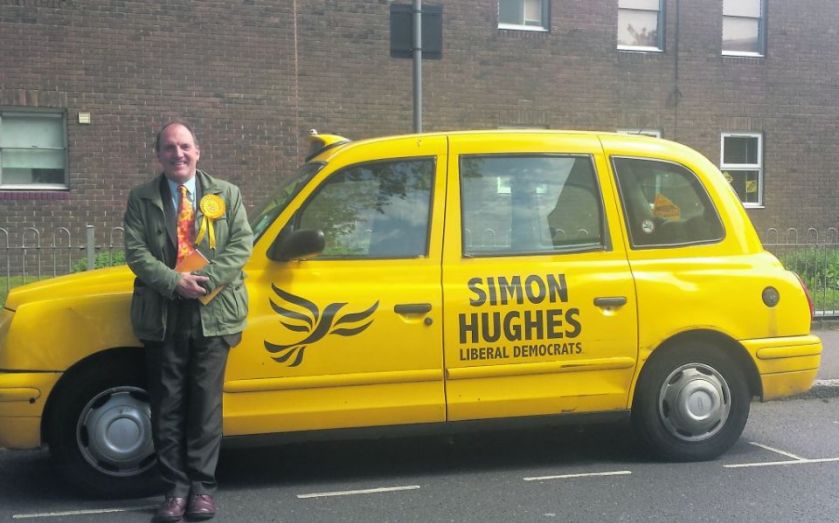 Our second seat profile sees Charlotte Henry join the Lib Dems in Bermondsey.
Find the first profile in our series here: Battle for Poplar and Limehouse at the edge of the City
Being a Liberal Democrat candidate in London is a tough ask at the moment, with Labour aiming to make gains in the capital at their expense.
However, Simon Hughes, the Lib Dem incumbent in Bermondsey and Old Southwark, is no stranger to backing teams facing an uphill struggle. He’s a Millwall fan.
The team crashed out of football’s Championship last week, and  Hughes says that there may be a case that relegation and rebuilding is the best thing for his side.
The same thing could be said of his party, who are looking at bleak poll numbers in the run up to Thursday’s General Election. “That may be something we have do,” the former Lib Dem deputy leader ponders.
“It is tough times,” Hughes says of the situation his party finds itself in after five years in government with the Conservatives, “but we were very realistic about it. We’ve gone into government for the first time since the war. I’m clear we’ve made a huge contribution in stabilising the economy, which is what most people want.”
Hughes is a centre-left MP, who built his majority on local work, before ending up as minister in a Justice department run by the Conservatives. In many ways he personifies the struggle the Lib Dems have had over the past few years.
“Obviously, for us, it was a coalition of parties that are natural opponents, but in the national interest we worked together. It’s absolutely made sure we turned round the employment figures, the growth figures,” he observes.
Given the conflicting interests, is there any decision taken by his government he wishes he could reverse? “I don’t think there is any legislation that we’ve passed, or decision that we’ve taken, that I’d like to reverse,” Hughes replies at first, before pausing.
“We would have wanted 100 per cent of our manifesto and tuition fees were there, so, yes, we would have liked to deliver that, but in the end we stopped the Tories having unlimited fees, and we got the best outcome we could.”
The Lib Dems would also change some of the rules around the so-called spare room subsidy, he says: “The one thing we’ve said we will change, which therefore probably is a reversal, is we would change the application of the housing benefit subsidy.”
Hughes agrees with his colleague Lord Scriven who said yesterday that Prime Minister David Cameron had told Nick Clegg the Tories would not win on Thursday. “Before the election campaign began, senior Tories made it clear to me that they didn’t think they could win a majority,” Hughes says about the latest coalition row.
Despite national struggles, Hughes’ local campaign seems to be going strong. Step off the tube at Bermondsey and you are greeted by a block of flats decked out with banners supporting him. Turn left, and it becomes something of a yellow brick road, with numerous yellow Lib Dem diamond signs outside the houses.
Hughes has been an MP in the area since the controversial Bermondsey by-election of 1983, winning last time in 2010 with a record tally. His level of support comes from vigorous local campaigning in the diverse community.
It is also a constituency that sits right on the edge of the City. “Every single bridge in the constituency is over to the City,” Hughes points out, having worked hard to make the City accessible to his constituents, in every sense of the word.
Having campaigned for Jubilee line stations in Southwark and Bermondsey and a Bakerloo line extension, Hughes is focusing on things above ground. “The biggest project is the cycling and pedestrian bridge from Surrey Docks to Canary Wharf,” he explains.
In addition, he also wants City firms to reach out more to people in the communities he represents. “I’m not saying any of them are not willing…” he says, but he does want to see greater instances of firms going into secondary schools and doing recruitment monitoring by postcode.
He explains: “It’s a challenge I’ve put down to businesses, to make sure that all the businesses in the City and Canary Wharf, and around London Bridge, record by postcode where people who they recruit live, so we can see exactly how they are doing at recruiting people locally.”
As Hughes pulls up to Canada Water station in his yellow campaign taxi, he sees a group of Labour campaigners posing for a photo. His taxi hovers, briefly, just in shot, before the models realise and take their shoot elsewhere. The battle for Bermondsey continues.
[custom id="1"]
Share
Tags: General Election 2015