Adventure time: Why every explorer wears a mechanical wrist watch 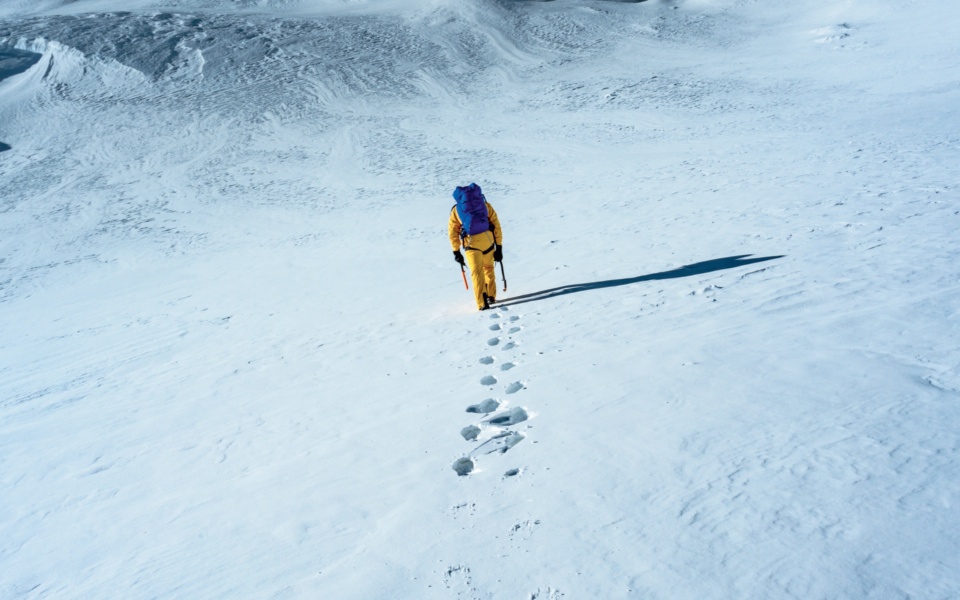 There’s an old motoring adage that goes, “win on Sunday, sell on Monday.” In other words, as cripplingly expensive and vainglorious as motorsport can be, prove yourself successful on a race weekend (not to mention thrillingly glamorous) and you have no better billboard for the sporty road-goers populating your forecourt.

It’s why Enzo Ferrari begrudgingly started making sports cars in the ‘50s (ploughing all the cash back into racing). It’s also why Ferruccio Lamborghini confused everyone by not going into motorsport at all, beyond supplying engines to other teams.

But, for the purpose of these pages, “win Sunday, sell Monday” is a handy analogy for what we know as the ‘sports watch’. Most professional sportspeople don’t ever wear a watch, except when it’s time to strap on the sponsor and lift a trophy, but the ‘sports’ we’re talking are more ‘endeavours’ – endeavours that demand a close eye on the time, no-nonsense ruggedness and a failsafe analogue backup.

Mountaineering, diving, space travel… every quartermaster of every field of exploration has always had ‘Watch. Wrist. Waterproof.’ scrawled onto their procurement list. And, like the Maseratis, Aston Martins and Mercedes of this world, Switzerland’s manufacturers waste little opportunity planting their own chequered flag after the event.

“Summit a peak, sell next week,” if you like.

Only, it turns out even better for watch fans than proud new owners of an AMG coupé. Because what you’re buying into is the actual Formula 1 car. Whatever the parameters of the world’s most extreme adventurers, a watch that’s ‘custom-built’ or ‘tuned’ doesn’t come into it – Switzerland has already engineered it and marketed to Joe Bloggs, built beyond anyone’s needs, even an alpinist or astronaut.

Take 2019’s biggest horological anniversary, the Omega Speedmaster, which bounded about the lunar surface 50 years ago strapped to Buzz Aldrin. It was one of the few non-bespoke items on-board Apollo 11, and it remains standard-issue NASA kit – a manual-winding mechanical stopwatch, barely tweaked since. It was conspicuously not strapped to Neil Armstrong because his ‘Speedie’ was being used by Michael Collins as the ship’s clock. The very same ‘clock’ was used by Jack Swigert to time the stricken Apollo 13 module’s re-entry to the Earth’s atmosphere in 1970.

All that capability and baked-in derring-do can be yours for less than £5,000 from your local Goldsmiths.

Which isn’t to say Switzerland (or England, France or Germany for that matter) has been toiling away all these centuries without real-world impetus. Truth is, modern watchmaking owes everything to human exploration. The advent of transatlantic travel, high-speed public transport and telecommunications all drove the world’s watchmakers to be more precise, more portable, and more reliable.

Read more: Let there be colour: Rado’s range of watches made to Le Corbusier’s famous colour system are deliciously on trend

Washington’s International Meridian Conference decided to chop the Earth into 24 segments back in 1884, each running an hour ahead of its westerly neighbour; America alone was divided into four time-zones. With trans-continental railroads on the rise, a standard time system became increasingly necessary – a measure that took a tragedy of mis-timing to cement. The Kipton Disaster of 1891, 25 miles from Cleveland, saw one train engineer’s watch stop for four minutes, leading him to think he had seven minutes in hand rather than three, before he had to let the fast mail train pass. Both trains’ engineers and the postal cars’ nine clerks were killed in the collision. The General Superintendent of Lake Shore Lines quickly appointed Ohio jeweller Webster C Ball as Chief Inspector for the lines, whose fortnightly checks on the watches worn by all railroad workers gave rise to the expression ‘on the ball’.

Over a century before the advent of long-distance rail travel, watchmakers faced an even greater challenge: creating timekeepers accurate and robust enough to be taken aboard long ocean voyages and used to determine longitudinal position, relative to a time reference back at port. So many lives had been lost at sea through mis-navigation that the British government even set up a Board of Longitude and a £20,000 prize – eventually won by John Harrison with his ‘H4’ watch, still ticking away at the Greenwich Observatory. The ensuing stream of London-based ‘chronometer-makers’ ensured Britannia ruled the waves well into the 19th century.

Today, miniaturised and spiked with ever-more-robust alloys, a finely crafted wristwatch is a trusty instrument for every sort of explorer. It can be used to monitor sub-aqua oxygen useage with a glance at the bezel; time anything else with a simple push of a chronograph’s button; it can even double as a rudimentary compass when the GPS drops out. And while you might think a luxuriously priced mechanical timepiece over a cheaper, more-precise quartz watch is flashy frippery for the sake of it, remember that battery-powered electronics simply grind to halt in sub-zero conditions.

This fact has led a veritable base camp of explorers to adopt Henley-on-Thames’ Bremont as their horological Tenzing Norgay. (Though, for the record, Tenzing Norgay wore Rolex when he summited Everest in 1953, defining the parameters for the its new ‘Explorer’ in the process.) Ben Saunders chose one of Bremont’s reinforced-steel, precision ‘chronometers’ for his solo Antarctic expedition back in 2014. Half-man-half-bear Ross Edgley wore a Bremont S2000 diving watch throughout his 2,000-mile swim around Great Britain last year.

And topping them all, you now have newly crowned mountaineering superhero Nirmal ‘Nims’ Purja – fresh from his multi-record-smashing ‘Bremont Project Possible’,  summiting all fourteen of the Earth’s 8,000-metre-plus peaks in just over six months. The previous record was seven years. And strapped to his wrist throughout, an S300 with suitably snow-white dial.

The modern incarnation of Webster Ball’s US railroad enterprise is now Swiss, but no less enterprising. It fosters its own ‘Explorer’s Club’ and yet another plucky Brit is the latest to join its pantheon: Ash Dykes.

The first to walk across Mongolia solo and unsupported in 2014, Dykes has now completed ‘Mission Yangtze’, making him the first to walk the entire 4,000 miles of the Yangtze River. His journey started with the freezing temperatures of the Jianggendiru Glacier on the Tibetan Plateau and brought him to the more tropical environment of its delta near Shanghai. Encounters with native inhabitants kept him buoyed when it mattered, but in his own words, his most consistent, trusty companion was on his arm the whole time – ticking with its own heartbeat.

Most days are long. If you’re lucky, you come across the locals who are so friendly and make all the difference to the expedition being enjoyable or not. But often I’m alone… I’m tired, cold

“Most days are long,” he recounts. “If you’re lucky, you come across the locals who are so friendly and make all the difference to the expedition being enjoyable or not. But often I’m alone… I’m tired, cold and all I want are my tent and my sleeping bag. But the focus of the task keeps me disciplined and thankfully my Ball Engineer II Magneto S keeps my mind on the game, day and night. I have a routine, a time to smash out distance, a time to rest and recover, and my Magneto centres that; it keeps me in check.”

With Earth now thoroughly mapped out it’s easy to be cynical about today’s notion of adventure. Especially given that infamous photo taken in May, showing the human traffic jam queuing for Everest’s summit (taken by Bremont’s own Nims after ticking off number four of his 14). But with climate change now upgraded to a climate crisis, the modern explorer is more crucial than ever. Less explorer and more environmental ambassador, speaking with wonder, and concern, from the front line.

Vacheron Constantin is Switzerland’s longest-running watchmaker – one of the very finest and probably the last you’d consider mentioning alongside carabiners and Kendall mint cakes (unless that list also includes ‘thermal tux’). But its latest recruit is Cory Richards, the Colorado teen slacker turned National Geographic photographic wunderkind, and a highly accomplished alpinist in his own right. He’s a member of the two percent who have summited Everest without oxygen. Equipped with his own custom Overseas Dual Time in tough, lightweight titanium, Richards is a true unique, with infectious personality and rare humility.

In his own words, his Dual Time’s secondary ‘home time’ display is, “a constant reminder to not risk too much, but also to celebrate all those in my life that have brought me to this moment.

“It’s important for me to know what time it is back home,” he continues, “but perhaps even more important is to know that the world in which I’m currently working is one of two. To tell meaningful stories, it’s important that I keep going off the grid to discover important issues and impacts.”

Environmentally, this year’s other revelation came from the other end of the altitude spectrum – the bottom of the Mariana Trench, 10,928 metres below the surface of the ocean. Ex-naval commander-turned-financial tycoon Victor Vescovo used sonar imagery to determine the deepest point of the Pacific, only to discover, through the porthole of his purpose-built submersible, discarded bits of plastic.

Rolex and its own Mariana aquanaut, the film director James Cameron are allegedly contesting the veracity of Vescovo’s depth, claiming their own ‘DeepSea Challenge’ of 2012 still has rightful claim to the records books. At the very least, Rolex will always have ‘first there’ bragging rights thanks to its sponsorship of Swiss oceanographer Jacques Piccard’s 1960 descent aboard Trieste.

Either way, the prototype watches strapped to the outside of Piccard, Cameron and Vescovo’s respective crafts – all still ticking upon re-surface despite the bone-crushing pressures – means we can perhaps coin a new adage: “Plumb on Sunday, sell on Monday”.