'A Day in the Life' of Jimmy Nguyen- Founding President, Bitcoin Association 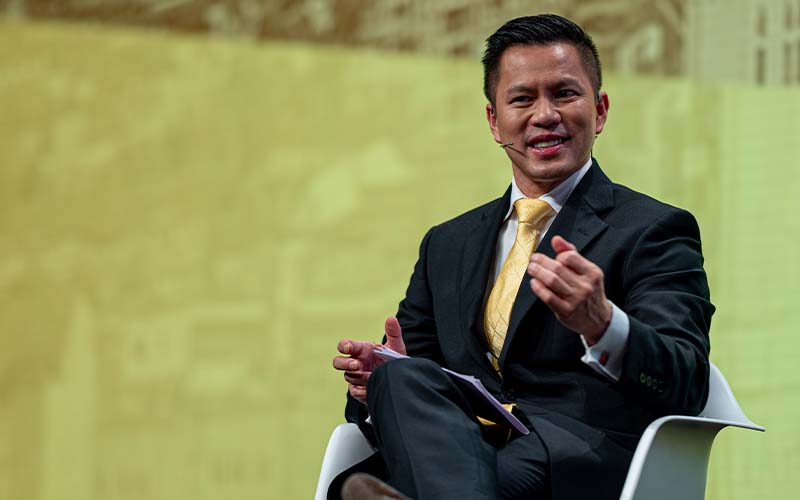 Jimmy Nguyen is the Founding President of Bitcoin Association, the Switzerland-based global industry organization that supports Bitcoin SV.  One of the main competing chains of Bitcoin, Bitcoin SV uses the original Bitcoin protocol and is massively scaling to be the global enterprise blockchain. Following a distinguished legal career, Jimmy shifted tracks professionally in 2017 to focus on blockchain technologies, most recently serving as CEO of  leading blockchain research & development firm, nChain. Now with Bitcoin Association, Jimmy spoke exclusively to BEQUANT about the work of the Association and the future he envisions for digital assets.

What is usually the first thought that goes through your mind each morning?

What can I do today to help businesses thrive within the Bitcoin SV ecosystem? Although first, where’s the coffee?

How much have things changed Bitcoin Association and you personally as a result of the COVID-19 pandemic?

At Bitcoin Association, we had several major conferences and in-person events in the works prior to the pandemic, each designed to work with and educate different segments of the Bitcoin community: businesses, developers, investors, and end-users. As a result, we’ve pivoted towards moving as much of our programme online as possible, which has produced great results.

Take Bitcoin SV DevCon for example. We had intended to run our first two Bitcoin SV Developer Conferences this year – one in San Francisco and another in Shanghai – and although we lost some of the interaction that comes along with a big in-person event, we attracted a much wider audience; we had over 3,400 unique attendees for our first virtual BSV DevCon, compared to the several hundred we were targeting for an in-person event in San Francisco.

The focus on online content has also led us to form partnerships with big online developer communities – including WeAreDevelopers in Europe and China’s largest software development community, CSDN, who boast over 31 million users.   For us, it’s been about adapting to find new ways to deliver our programme, but as a result – we’ve managed to deliver it to an even wider audience, which is fantastic to see.

As for me personally, the COVID-19 situation gave me the opportunity to take the first extended period of rest I’ve had in the past few years.   Normally, I spend 80% of my life traveling across the globe on Bitcoin business.  Now, there’s no more jet lag!  I’ve had time to rest, get full nights of sleep, and cook for myself regularly – just like I did back in my university and law school years.  But like most everyone else, I’m now itching for life to get back to normal and for me, that means getting back on the road to grow Bitcoin SV globally.

We know how busy you are, but what duties take up the bulk of your workday? And which one do you think is most important?

I have a unique role that calls upon many different skill sets – be it immersing myself in Bitcoin technology, working with our media and communications teams, getting involved with event planning or team management, even dabbling in legal and policy work like in my previous life as a lawyer – there’s always something different! But I would say that more than anything, I view myself as an advocate for Bitcoin SV and a relationship builder.

Since the start of the pandemic, my workdays have looked very different. Instead of a constant blur of airport lounges and hotel lobbies traveling the world on Bitcoin business, for better or worse, I’ve been settled in place. That’s meant for me personally, figuring out how best to be effective communicating and working with all of our global stakeholders and partners, wherever they may be. A part of my role that I deeply care about is connecting people to the right businesses and resources who can help them build with Bitcoin SV, which has been something I’ve had more time to do but had to approach differently over the last few months. A positive that I’ve taken from the past few months, however, has been the opportunity to spend more time focused on the operational aspects of my job and long-term planning for the Association – something which I am confident will pay dividends down the line!

We often hear you talk about Bitcoin SV being an opportunity for investors and developers, where are you seeing the biggest opportunity at present?

The biggest opportunity begins with understanding just what Bitcoin is capable of when its blockchain is allowed to massively scale – as we are doing with Bitcoin SV.  A massively scaled Bitcoin network enables greater data capacity with new functionalities and applications, as well as high volumes of fast transactions with super low fees, for the first-time truly facilitating micropayments.  It means developers and enterprises can build applications and develop services that intertwine data with payments – even those as small as a fraction of a cent.

Imagine a world where all of your daily digital activity – be it making a social media post that attracts engagement or giving companies access to your identity information – can be monetized. What if instead of major online entities capturing the billions of dollars of revenue generated, we flipped that paradigm entirely? With Bitcoin SV, this is possible now. Understanding the scope of that potential and what it represents is the biggest opportunity at present.

What excites you most about cryptocurrencies and digital assets?

I am not excited about cryptocurrencies in general; the world has far too many unnecessary cryptocurrencies.   Just like the world operates on a single global Internet, the world will work better with one digital currency and one blockchain that can power everything.  All other assets can be tokenized on that single blockchain, which would be much more efficient for the world. The only digital currency and blockchain that is scaling to realize that vision is Bitcoin SV.

The reason I am so excited about Bitcoin SV is that it’s not just a digital currency or a blockchain; it’s Bitcoin as a network protocol, just like the Internet protocol is a foundational rule set for an entire data network.  I was a young lawyer in the 1990s when the Internet boom was beginning; now, more than two decades later, I’m seeing a similar opportunity for those who understand that Bitcoin is a protocol for an entire world-changing data network.   Bitcoin should be like plumbing; its data network should operate underneath global payments, data transactions, digital activity and business services  – without people even knowing about it.

You’ve talked in the past about how digital assets are the future of society. What activity are you conducting to support this?

I foresee a future where all assets can be digitally tokenized on a blockchain – stock in public companies; shares of interest in fine art, collectibles, real estate; rewards points; even your personal data.  Once represented as digital assets, they can be easily traded via online exchanges.    This will open new ways for consumers and businesses to earn value from asset classes (such as your personal data) which were previously difficult, if not impossible, to monetize.

We are advancing that future by supporting the only blockchain that can massively scale to enable this – Bitcoin SV.  In addition, our Bitcoin Association advocates for a regulation-friendly ecosystem – that means ensuring that securities and other laws are followed when tokenizing assets.

In recent months, institutional adoption of digital assets has been discussed as one of most important factors for long term growth of digital assets. Where do you think the progress is being made to solve this problem?

Institutional investors and enterprises have been wary about digital assets because Bitcoin and cryptocurrencies generated a poor early reputation in their early days –  something which can primarily be attributed to its illicit use on dark marketplaces like the Silk Road, together with a perceived culture of “crypto anarchists” who resist legal compliance surrounding it.

In contrast today, we at Bitcoin Association and across the wider Bitcoin SV ecosystem are steadfast in our support to build a regulation-friendly ecosystem for digital currencies and assets – precisely so big institutions and governments feel comfortable working with it.  This is absolutely a required step on the path to achieving global adoption.

Progress means having KYC/AML compliance tools, blockchain analytics services, law enforcement against illegal activity with digital currencies, and recognizing that laws do in fact apply to the blockchain world.  At the Bitcoin Association, we support all such efforts to normalize and bring digital assets to big institutional usage and to the masses. Our vision is a world of 5 billion+ people using Bitcoin SV and assets tokenized on its blockchain.  That requires winning the confidence of and ensuring adoption by enterprises, governments and consumers around the world – a predicate of which is creating a lawful environment for digital assets.

What does the future hold for the Bitcoin Association and yourself?

For Bitcoin Association, our future will continue to revolve around establishing a solid foundation that will ensure that the Bitcoin SV ecosystem can deliver real utility, which will in turn drive use and value. That means enhancing Bitcoin technical infrastructure; global developer training; support for enterprises to build blockchain use cases; encouraging user-friendly applications for consumers; and educating the investor community; and engaging with government leaders on sound policy.   There’s a lot of work to do, but the opportunity is to guide the biggest leap in technology the world has seen since the advent of the Internet.

For me personally, once the world gets back to something again resembling normality, my future means once again packing my suitcase and getting on the road (or really, in the air) to work with people around the world for the betterment of Bitcoin SV. But more than that, for me, this is the chance to be a part of something special – something which I hope will leave a legacy in technology.  That is ultimately the big WIN.