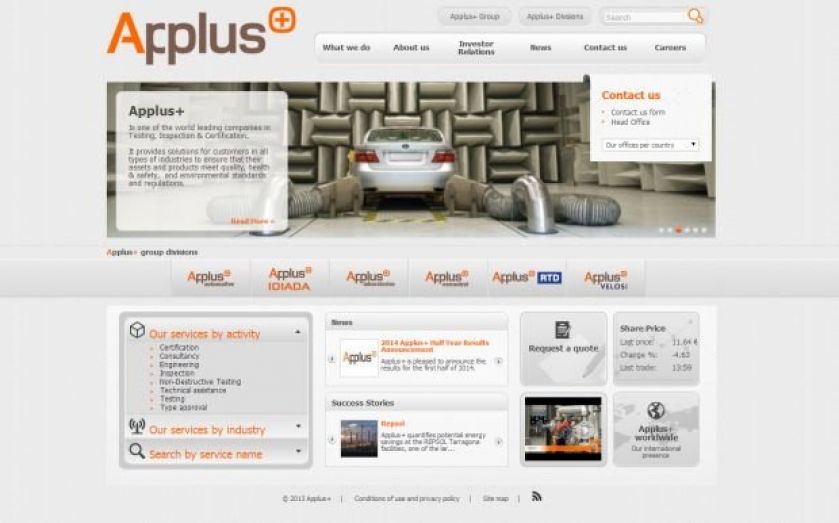 The troubled performance of private equity-backed flotations continued yesterday after the Barcelona-based Applus saw its share price fall to its lowest level since its float only two months ago.

Applus shares took a hammering, falling around 13 per cent on the day to finish on €12.20, below its Initial Public Offering (IPO) price of €14.50, after it warned it expected revenue growth to be slower in the second half of 2014.

The company, which provides industrial testing, inspection and certification services, saw a rise in first half revenues of 2.6 per cent to €780.8m, and a net profit of €5.9m up from a loss of €72.3m last year, but markets were unassuaged.

The May deal, overseen by Morgan Stanley and UBS, with Rothschild also advising, saw Applus raise €1.1bn from outside investors. The IPO was targeted at institutional investors, with around 55 per cent sold to UK funds.

The Carlyle Group, which had bought Applus in 2007, reduced its shareholding from 68.3 per cent to 35.5 per cent, but is by far the largest shareholder in the company.

Other prominent investors include GIC, the Singapore sovereign wealth fund with 6.15 per cent of shares, and US financial services company Ameriprise Financial with 3.85 per cent, while one of the most significant UK investors is Aviva.

Other Spanish firms floated this year have also suffered, including online travel company eDreams, which has seen its share price more than halved since its IPO in April.