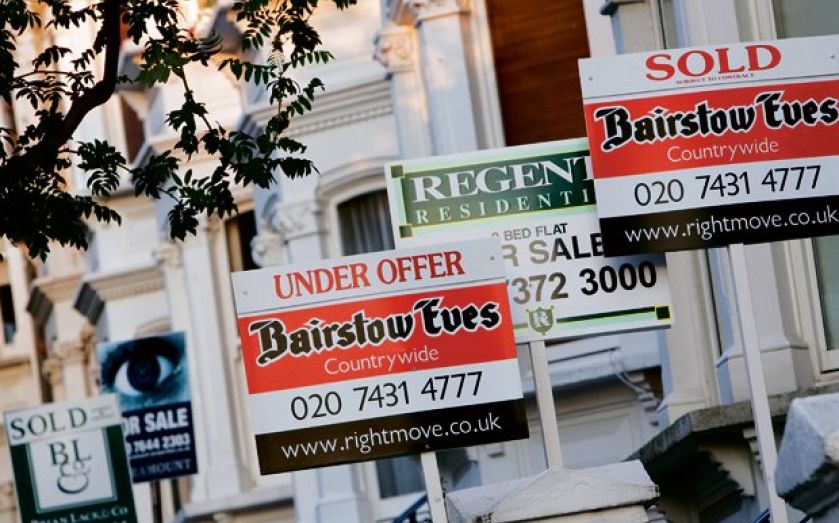 LONDON’S house prices have soared to historic levels, with the gap between prices in the capital and elsewhere in the UK expanding to the widest it has ever been.

Figures released by Nationwide yesterday showed that the cost of a typical London home – at £362,699 in March – was over twice as high as in the rest of the country.

The widening chasm prompted Jonathan Samuels, chief executive of Dragonfly Property Finance, to say that London “has almost become a country within a country.”

Samuels added: “The contrast between London and the rest of the UK grows starker by the day. The growing north-south divide has once again been highlighted and is very real. The market is increasingly splintering.” 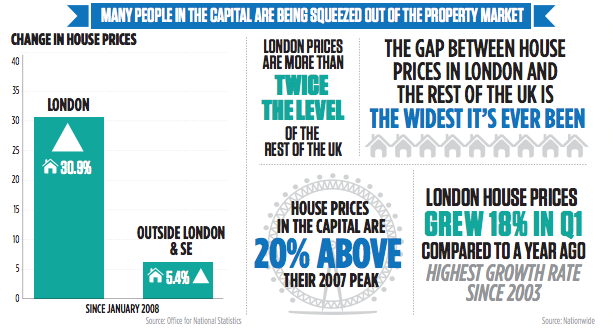 Prices in London jumped by a further 18 per cent in the opening three months of the year when compared to a year ago. This was the sharpest rate of growth since 2003, the research said.

While demand is bolstered by a recovering economy, low interest rates and easy credit from government schemes such as Help to Buy, years of restrained supply appear to be taking their toll.

“The upturn in the supply side of the market continues to lag far behind [the upturn in demand],” said Nationwide’s chief economist Robert Gardner.

“The number of new homes being built in England is still around 40 per cent below pre-crisis levels – and this was already insufficient to keep up with the increase in the number of households being formed.”

Housing minister Kris Hopkins attracted criticism on Tuesday night after appearing to play down surging prices. “If I buy a house I expect the value to rise,” Hopkins, the MP for Keighley and Ilkley in west Yorkshire, told the BBC’s Newsnight programme.

And yesterday Duncan Stott of the campaign group Priced Out, which argues for more affordable housing in the UK, said the latest figures paint a worrying picture.

“The cost of housing in the capital is now beyond ridiculous,” Stott told City A.M. “If house prices keep inflating at such an incredible rate then soon only a tiny minority of London’s young workforce will ever have a hope of owning a home in their city. We urgently need to see action to bring house price rises to a halt.”

Prices grew in every region of the UK during the first quarter of the year, Nationwide’s data showed. However, the only regions to have surpassed their pre-recession peaks are in the south east. The firm’s figures show London prices at more than 20 per cent above their 2007 values.

The estate agent’s numbers chime with data from other sources. The Office for National Statistics (ONS) published regional figures this week that estimated the cost of an average London home at £458,000 – even higher than Nationwide has found through its own data.

Over the last six years, and despite a sharp and prolonged economic downturn, house prices in London are up nearly 31 per cent according to the ONS.

In the rest of the UK excluding London and the south east, prices are up only 5.4 per cent during the same period.

Costs are also inflating in areas of the south east outside London. In the rest of the region the average house price is £316,000, the ONS says – up nearly 14 per cent since January 2008.

Real estate firm Jones Lang LaSalle said yesterday that residential building in London has been picking up, yet added that more must be done. “Only 15,000 units were completed last year while the Greater London Authority suggests demand will be closer to 42,000 per annum over the next decade, with some estimates even higher,” it said.