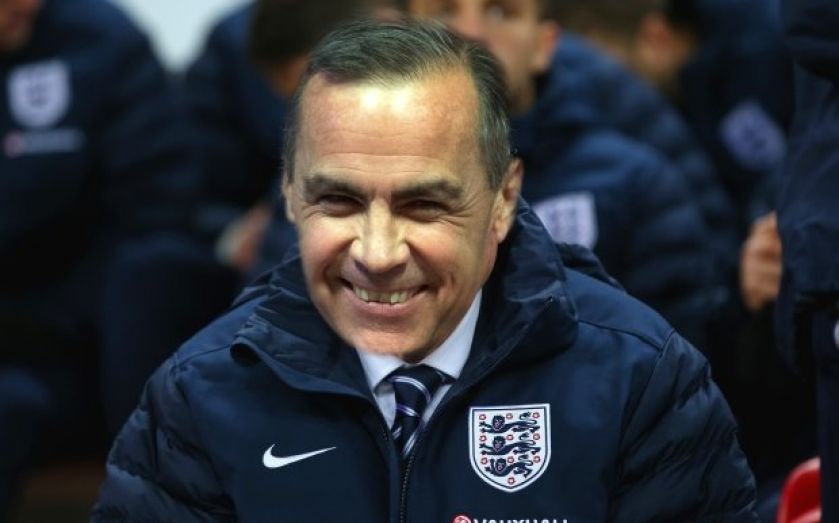 The Bank of England's governor has brought back an old favourite to the central bank's press conferences: sport analogies.

Mark Carney has suggested that securing the UK's economic recovery so far has been "like making it through the qualifying rounds of the World Cup". A major achievement, but not the ultimate goal.

The "real tournament" is about to begin both in football and for the economy, says Carney, and the goal for all of the Bank's various components is a strong, sustained and balanced expansion. Carney says that, across the bank, policy is being set in order to "help win that prize" for the good of the UK.

All very well, but as the Guardian's Larry Elliot highlighted during the BoE's Inflation Report Q&A, it is perhaps a more revealing lens through which to view UK plc than Carney might have intended.

Hopes for the England squad at this year's World Cup are by no means at all-time highs. Football Association chairman Greg Dyke's cut-throat gesture on seeing England's draw for this year's group stage aside, the bookies are less confident of an England victory than at any time this century.

At 25-1, William Hill's current odds for an England win represent an implied probability of just 3.85 per cent. Slim chances against the odds given for tournaments in years gone by. In 2010 and 2006 the bookmaker saw the chances of a national victory at 12.5 per cent.

"England teams always set off to the World Cup with high hopes after the last tragic campaign," said Elliott, and while this squad might be in fine fettle, with various indicators suggesting the economy is in good shape, a "month later the team comes back with its tail between its legs, and we get the inevitable post-mortem."

Often, England are not quite as good as they think they are, and things end up going very wrong.

Hopefully Carney isn't making the same mistake with regards to the economy. The BoE's outlook for the UK is glowing, with GDP expected to grow at 3.4 per cent this year, and 2.9 per cent in 2015 (a forecast revised up since Februrary's 2.7 per cent estimate).

Inflation remains well below the Bank of England's mandated two per cent target and today's data releases confirm that real wage growth has finally returned, with unemployment is at five-year lows.

If we have any hopes for this year, it's that England midfielder Raheem Sterling will perform better than the nation's currency did today, as sterling slipped by around 0.4 per cent against the dollar during the BoE conference, to its lowest level since 16 April.

Carney isn't the first central banker to reference the World Cup – Brazil's Alexandre Tombini opened his speech in London yesterday with a reference to the tournament in his country – but hopefully he'll be the last. At least if we do hear a sporting analogy from him again, he should probably stick to his favoured sport, ice hockey.

Radio 5 Live's Adam Parsons noted near the end of questions that we may look forward to cricket metaphors from Carney later this summer, as his predecessor Sir Mervyn King had been known to dabble in. Perhaps a second chance for the new governor to avoid being caught out.