Best of travel: Why the US Navy sank its own ship off the Cayman Islands 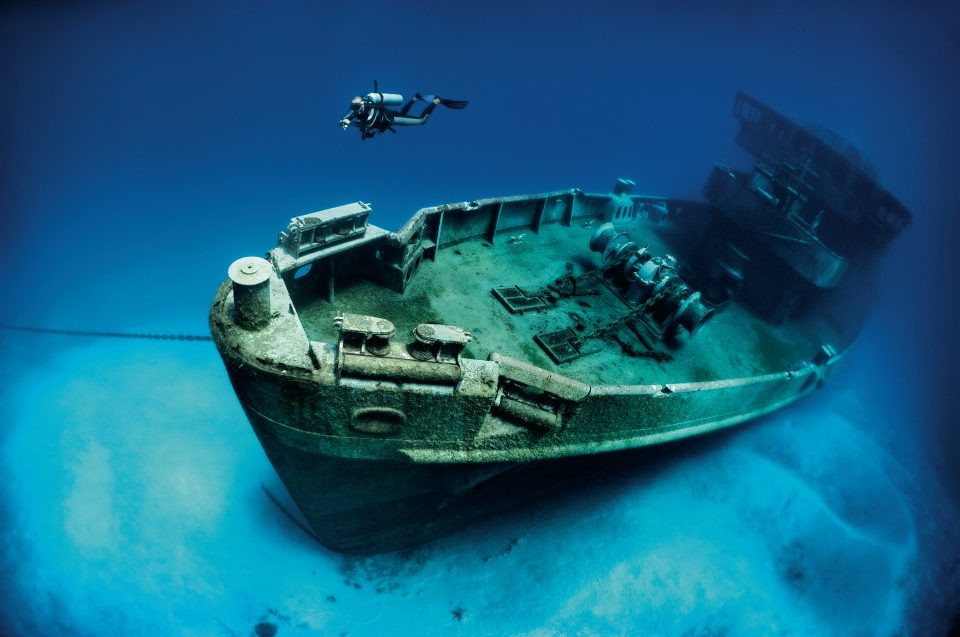 To tide us over until we’re able to travel again, we’re republishing classic travel stories from our archives. This week we revisit Adal Hay-Nicholls’ diving trip to the Cayman Islands to discover the truth behind a legendary wreck.

The sound of whirring rotor blades carries across the bay. I’m staring at a framed photo of Tom Selleck inside the office of Cayman Island Helicopters, while its proprietor, Jerome Begot, readies the chopper.

Jerome is a Frenchman who, inexplicably, flew in the US Air Force decades ago, and Magnum PI is his hero. After flirting outrageously with the females in our group, he straps himself in, we take off, and he cues up the theme music to his favourite 80s TV show through the PA before slamming the joystick forward and giving us a thrilling plunge towards the cerulean ocean. In its depths is a large shadow; the sunken wreck of the USS Kittiwake.

Well, ‘wreck’ isn’t an entirely accurate descriptor. The Navy ship was sunk on purpose to the delight of scuba divers. Commissioned in 1946 as a submarine rescue vessel, it operated throughout the Cold War and, in 1986, recovered the black box from the space shuttle Challenger, which disastrously disintegrated above the Atlantic 73 seconds after lift-off.

Now the Kittiwake’s mission is to form an artificial reef, and for wreck divers it’s an absolute paradise; clear warm sea, relatively shallow (20m) for good visibility. You can enter hatches on deck and plunge into the darkness; occasional shards of light bursting through portholes like searchlights. The ship is on its side and you can swim throughout its 76m length.

Such a pristine wreck is the ideal place to practise underwater photography. I’ve come to Grand Cayman with the Leica X-U, the celebrated brand’s first and only waterproof camera. It’s much chunkier than the usual minimalist offerings from Leica, encased in anti-slip rubber. It’s guaranteed to 15m’s depth, though I took my chances on the Kittiwake. How wise that is with a £3,000 bit of kit is open to debate.

If one is to invest in such an undertaking, then why not improve your skills with some professional instruction? At the top end of Seven Mile Beach are the classy hotels, like The Westin, the Ritz-Carlton and the Kimpton Seafire Resort, where we’ve spent 48 hours acclimatising, but on the third day of the trip we head to the bottom end, past downtown George Town, where the hardcore divers hang out. Sunset House mightn’t trouble the star ratings, but it has a buzz. Every balcony has wetsuits and scuba octopuses hanging over its railings. In the evenings, the outdoor bar is filled with salty-haired souls swapping war stories of the deep.

Most conveniently, it is home to Cathy Church’s Photo Centre. Cathy is a 74-year-old marine biologist who was picking up lifetime achievement awards for her photography in the 1980s. She’s been teaching for over 50 years, mostly on Grand Cayman. After an hour’s classroom work, taking pictures of cuddly toy fish, we make the first of two shore dives, a special flash attached to my camera.

A short swim from Sunset House is one of several sunken bronze statues around the island. This one is nine feet tall, depicting Amphitrite, the wife of Poseidon in mermaid form. A weighty shoal of barracuda pass overhead, and a stingray underneath. From behind the green and yellow coral, a hawksbill turtle emerges. There is so much sealife to photograph. My best find is almost mistaken for a rock; an ugly brown and reddish thing, about a foot long, covered in warts and trying to camouflage itself in the sand.

Read more: In one of the last mountain rainforests on the planet, a tea estate is doing its part to conserve Rwanda’s rich biodiversity

It has dorsal spines and is entirely motionless. Cathy points and encourages me to get closer, to kneel and point my camera forwards, angling the strobe. Using sign language, which I struggle to understand – all the while trying to maintain the correct buoyancy – she tutors me in exposure, aperture and strobe angle. It’s only afterwards that, having been just inches from the fish, Cathy reveals to me that the stonefish – for that was his name – is one of the most venomous creatures on the blue planet. A single prick from those spines will render one paralysed, gasping for air, and most probably dead. Eek.

As any diver will tell you, you can’t get straight on a plane after a dive, unless you wish to plunge into the title of Radiohead’s second album, but there are plenty of ways to kill a day in Grand Cayman. We have an avuncular local guide – she goes by ‘Lady Di’ – who takes us around the island to visit blue iguanas, the world’s most endangered species, and, at my behest, the cheapest cigar shops in town.

The next day we take the tiny Cayman Airways Express from Grand Cayman, flying over Cayman Brac and onto the third main island, Little Cayman. While Grand Cayman is a cruise ship mecca, and Cayman Brac the region’s metropolis, Little Cayman is completely unspoilt and the population is such that after a few days wandering around you’ll probably be on waving terms with everyone on the island. Sixty miles northeast of Grand Cayman and by far the smallest of the islands, as its name suggests, the total number of residents is 170.

We take the hotel’s dive boat out to Bloody Bay Wall; a 2,000m sheer drop which inspired the movie The Abyss

The Southern Cross Club was opened by fisherman in 1958 and is now the island’s most exclusive hotel, though its beach bungalows still have an authentic rustic vibe. Set on white sand, it’s utterly tranquil, and for complete solitude you can take a kayak across the lagoon to Owen Island, which the Southern Cross Club faces, and explore the coves where pirates used to drop anchor. Most guests are there for the diving, and this is where Little Cayman really excels. We take the hotel’s dive boat out to Bloody Bay Wall; a 2,000m sheer drop which inspired the movie The Abyss. Vertical forests of fan coral and tube sponges form a technicolour playground for trigger fish, groupers, eels, rays, and sharks. It is one of the Seven Wonders of the Underwater World. It demonstrates the enormity of the sea.

My photographs don’t do it justice, one would need Cathy Church’s experience for that. But as a place to practise with an underwater camera there’s nowhere better. You can live out your Jacques Cousteau fantasy and record yourself doing it.