RationalFX and Xendpay founder Rajesh Agrawal on Apple Pay, Masai warriors and the future of banks 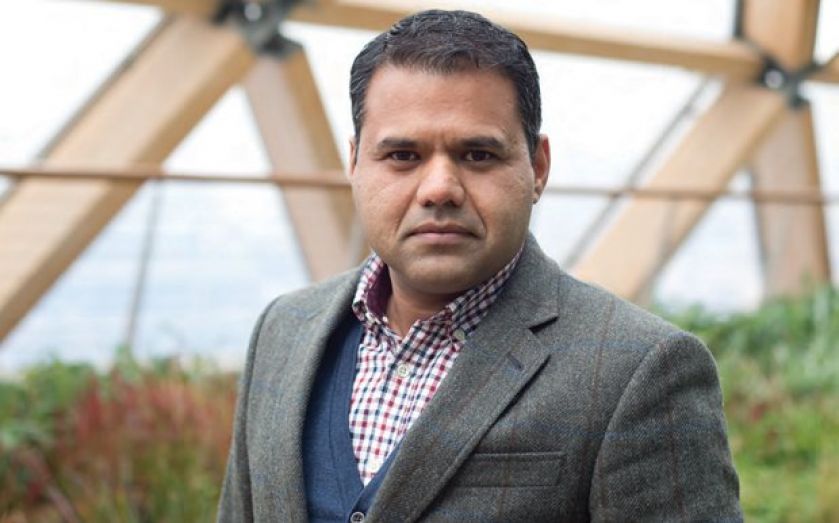 When I get the Tube, I always pay using my Apple Watch,” says Rajesh Agrawal. The Indian-born entrepreneur and philanthropist doesn’t exactly need to take the Jubilee Line to work – in The Sunday Times Rich List 2012, he was estimated to be worth around £90m. But making money has never been the aim: “look at Beckham – he started playing football because he loved the game, not money. Money can never be your goal; it is a by-product.”
Ten years ago, Agrawal was sleeping on someone else’s sofa because he “had nowhere else to stay”. Now, from his office, high up in One Canada Water, you can see across the big investment banks and to the City. “Look at the view,” he says, before engaging me in a game of spot the landmark. “London is the greatest city in the world. I love it; it has given me a lot. I came here and started these businesses with nothing. But if you’ve got access to the internet and a computer, you’re a businessman here. When you’re entrepreneurial, anything is available to you to make money from.”

Within a year of touching down in the UK, Agrawal realised he could change the way money was sent abroad. He recounts when he first went to a bank to try and get a loan to start a business. He was refused. “Days later I went back and said I’d stay in my job [in FX] and just take out a loan to buy a car. I walked out with £20,000.” He used the money to live off while starting up RationalFX, a foreign exchange and money transfer firm. By 2012, he had founded Xendpay.
Unlike any competitor, Xendpay offers remittance transfers for free with the option of donating towards the cost of the service. “I believe people will pay for good service, even if they don’t have much to give.” So far, Agrawal has been proved right: 70 per cent of people pay the suggested amount; 6 per cent pay more. Free riders don’t matter because “the transaction charge is so low. It’s the greediness of banks which pushes charges so high.” So far, the company has done no marketing – its growth has been entirely down to word of mouth.
Last year, Facebook made Xendpay an offer and Agrawal refused it. “I didn’t set up Xendpay to make a lot of money. I set it up to make it cheaper for people to send money home. I still send remittances home. There are people all around us working two or three jobs in order to support their families’ healthcare, school fees, new ventures… this money is extremely important. It infuriated me that it was so expensive. I know a lot of my competitors are baffled – ‘who is this mad guy?’. But because of us, they’ve had to drop their prices.”
Indeed, people still think there’s a catch with Xendpay. New users will often send an experimental £1 or £2 to see what happens, expecting to see 25 per cent lopped off (fees can get that high in the industry).

Aside from virtual currencies (which he thinks are over-hyped and couldn’t take off without blanket adoption), Agrawal is very positive about all things fintech – and how the industry will shake up banking. “New companies are selecting the most profitable sectors and doing them that bit better. It’s very hard for a big institution to innovate, but the old models aren’t working.” Agrawal is also “strongly in favour” of the separation of investment and retail banking: “they’ve been able to sustain loss leaders because other operations are so profitable.”
But he is a realist: “the banks will be around in the same way that we see them today, but you will see changes – fewer branches, for example. Why should a 22-year old in their first job bear the brunt of your 10,000 branches?”
I ask him whether he thinks that, rather than see a bank gobble up fintech firms, we’ll see a fintech firm buy a bit of a bank. “Yes, I think that’s likely to happen… and the other danger banks face isn’t from challenger banks etc, it’s from other institutions who are looking at payments – like Apple and Starbucks.”

Agrawal describes his generation as “migrants to tech. I didn’t grow up with mobiles, Facebook. We’ve learnt to tweet, but it’s not our first language. He tells me about his little daughter, who will try to click and flick a hardcopy book. “She was born with the technology. Her generation will be extremely comfortable banking. But these things always bring their own challenges and surprises. If I’d told you 10 years ago that you could put up all your family holiday photos up, announce what you were doing, where you were, who you were with, you’d say, ‘why would I want to do that?’”

Xendpay is currently having a big push on the mobile front. “Word of mouth works better that way anyway – we can enable people to send recommendations to their contact lists and via social. We want transferring money to be and to feel instant – that’s particularly helpful if you’re exchange rate sensitive. With our new app, for instance, you’ll be able to send direct using Apple Pay.”
And bar the prospect of an isolated Britain outside the EU (he is staunchly pro-EU and concerned that the case for staying in isn’t being made strongly enough), Agrawal is very optimistic about the future more widely. “There is so much knowledge out there. I’m reading Abundance by Peter Diamandis at the moment, and I love a fact he gives: that a Masai warrior on a mobile phone today has more information available to him than Bill Clinton did when he was President.”
The problem, he says, is that, “while knowledge is abundant, wisdom is scarce. That’s why a moral compass is very important. The good news is that wisdom is contagious. In America, for example, philanthropy is a big thing. India has more billionaires, but philanthropy hasn’t caught on just yet. It will, though. It’s only a matter of time.”

Company name: RationalFX; Xendpay
Founded: 2005; 2012
Turnover: £1.3bn this year (RationalFX)
Number of staff: 75
Job title: Founder, chairman, chief executive
Age: 38
Born: Indore, India
Lives: North West London
Studied: BA and MBA at Devi Ahilya University
Drinking: Masala Chai (Indian tea); single malt whisky
Eating: French cuisine and street food from almost anywhere!
Reading: Abundance, by Peter Diamandis
Favourite Business Book: What they don’t teach you at Harvard Business School, by Mark McCormack
Talents: Shooting for the stars!
Heroes: My parents. My father for his unfazed calmness and my mother for her hard work and humility
First ambition: To be a doctor, so I could help others
Motto: “Nothing is impossible unless you think it is.”
Most likely to say: No problem!
Least likely to say: It’s impossible!
Awards: Young Entrepreneur of the Year 2011
Share