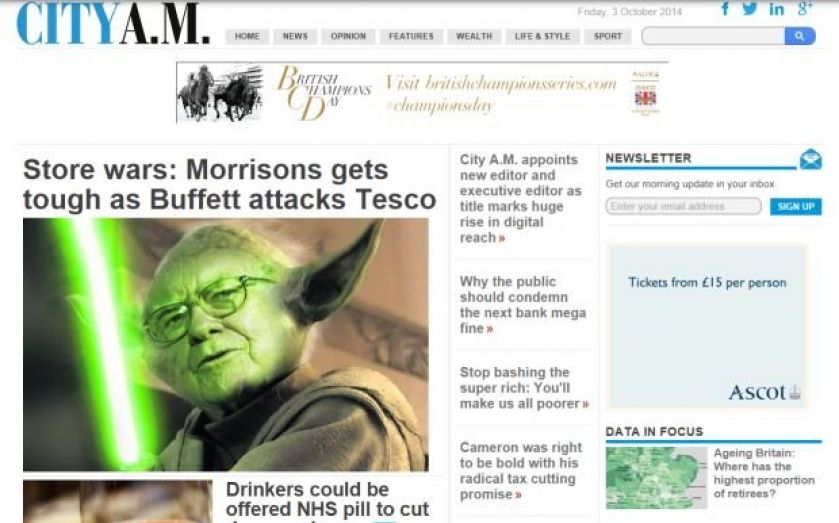 Who would have thought newspapers worth reading could be free? Yet today they are firmly established as a prominent feature in London’s media landscape. In less than ten years, City A.M. itself has become an essential part of the morning commute for London’s discerning professionals, with more than 100,000 copies ready for you every weekday.

The ability of business and finance to fund and develop new products and services, not just to meet the public’s needs but to reveal products we couldn’t even dream of, is part of what makes business journalism such an exciting field in which to work. Restless innovation, human drama and the ambition to achieve have always made it a thrilling world from which to have the privilege of writing despatches.

But right now, the profession is even more exciting than ever, because we find ourselves caught up not just as spectators but urgent participants. The journalism industry is being turned upside down by new technology. Established incumbents have seen once secure readership fall, and every day it seems new experiments are sprouting up in the rush to find a modern way to do news.

From its inception, City A.M. has believed in an answer that brought the best of print journalism’s history – a commitment to rigour, accuracy and originality – into a package that makes sense for the twenty-first century: comprehensive, characterful and free. We’re tremendously grateful for the support of our loyal and attentive readers, who continue to enjoy the result and help keep us up to the mark. I know David Hellier, as editor of this paper, will relish the challenge of living up to your high standards.

And as a company that is not even 10 years old, we have only just begun. Martin Ashplant’s brilliant digital team are bringing City A.M.’s mix of business and personality to an even wider professional audience online. At cityam.com, through our unmissable morning newsletters and on Facebook and Twitter, we can keep you updated throughout your working day.

And London’s most popular business newspaper is not just in the news business. Steve Dinneen has created a stunning luxury magazine in City A.M. Bespoke. The City A.M. Awards, now in its fifth year, has become an essential part of the calendar, bringing the Square Mile’s many talents together in person, just as we try to do in print.

As the new executive editor, it’s a tremendous honour to take on the task of working with so many talented teams to keep their strategy on track. As our journey continues, we will remain an ambitious team, producing ambitious products for an ambitious audience. Thank you for travelling with us.

Wedgwood shatters target
I wrote in September about the Art Fund’s campaign to save the Wedgwood Collection. This morning, it announces that the final £2.74m has been raised in time. It is wonderful that such an important part of Britain’s commercial heritage has been saved, further proof of a great future for the best of the old and the new.