Most of the focus on the Tory manifesto has been on the pledges to extend right-to-buy, double free child care and spend another £8bn on the NHS.

But one of the stranger aspects of the Conservative manifesto can be found on page three. The heading declares in rather Orwellian fashion "we have a plan for every stage of your life".

The Tories outline in detail how the government will be involved in every stage of your life from the day you're born in an NHS hospital to the day you retire and start claiming a state pension.

The plan immediately attracted mockery from right of centre commentators who were left bemused why a party that allegedly represents the values of small government and personal responsibility has a lifetime plan for every citizen.

Tory manifesto: "We have a plan for every stage of your life." Isn't that the Chinese Communist party?

But the Conservative Party's plan to outline how the government will be involved in your life from cradle to grave may have drawn inspiration from a strange source. The Tory Party manifesto bears a striking resemblance to a fictional story advert launched by Barack Obama's 2012 Presidential campaign called The Life of Julia. 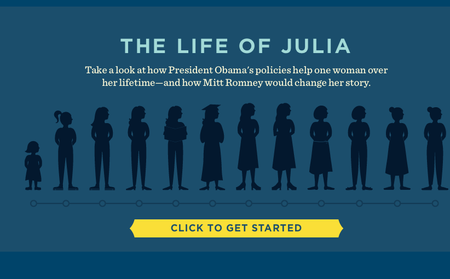 The slideshow follows Julia from the age of three to 67 and points to how she benefits from an array of government programmes introduced or maintained by President Obama.

From the Head Start to Medicare, the Obama campaign wanted to show how a Democratic administration would take care of its citizens for life in contrast to Republican Mitt Romney.

The ad was widely mocked by American Conservatives and can no longer be found on the Obama campaign website. But if you're an American looking for government-run healthcare there's still a link to Obamacare's website.