You really don’t need much of an excuse to dust off a collection of Van Goghs, but Tate Britain has reached for one all the same with its latest exhibition of twenty of the man’s works.

Van Gogh and Britain contextualises the artist’s output around his few interactions with this country, which amounts to a brief stay in London before he even became a painter, and a bookshelf heaving with Dickens novels.

Tenuous? A little, yes. It’s a bold stretch of curatorial imagination to claim that the cosmic view of Arles in Starry Night Over The Rhone recalls the Thames that Van Gogh would have, could have, might have gazed at on an evening stroll along the South Bank. You’d need to have the wild conspiratorial leanings of a Flat Earther to draw a causal link between London’s river and the one literally a two minute stroll from Van Gogh’s house in the southeast of France. The clue is right there in the name, really.

But there are some clearer connections to be drawn, enough to satisfyingly make the point that Van Gogh and Britain did indeed intersect. The Prison Courtyard, which depicts jailbirds plodding around a yard in a funereal circle, is technically Van Gogh’s only painting of London. He created it during his self-imposed internment at the psychiatric hospital of Saint-Paul-de-Mausole – a period of isolation that any reasonable person would assume to at least be the spiritual subject of the painting – but the work is in fact a faithful replication of a print by Gustav Doré of Newgate Prison, right down to the incongruous appearance of two butterflies in the corner of the yard, which Van Gogh colourised in his trademark bright yellow. 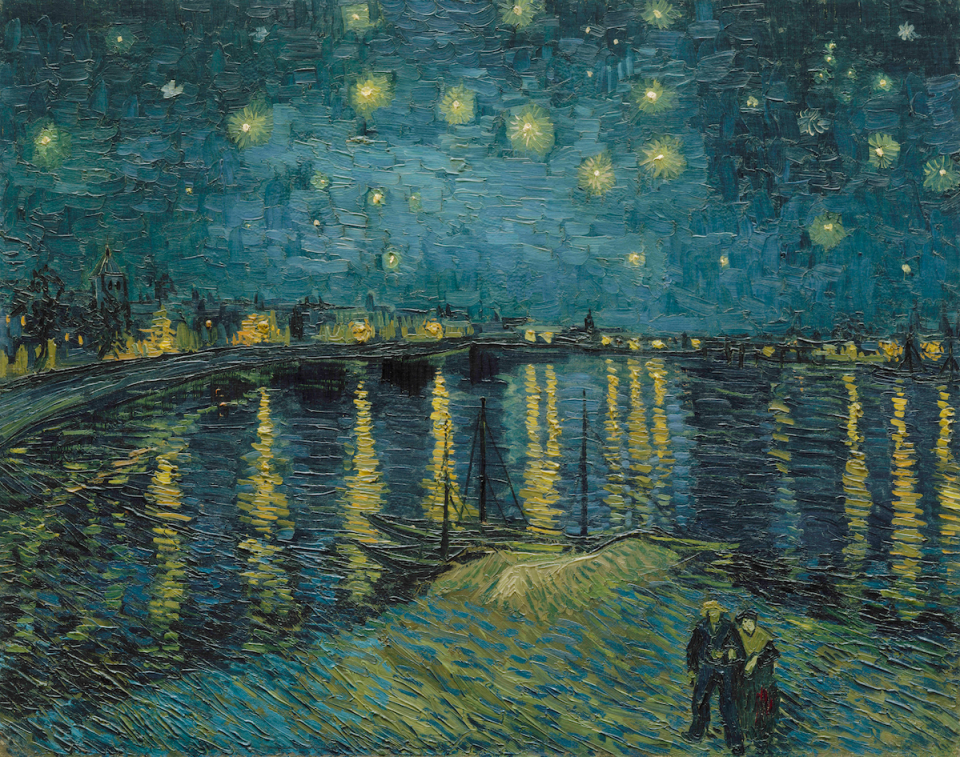 Along with Doré’s drawings, Van Gogh collected over 2,000 similar prints of British ‘black and whites’, monochromatic illustrations on which he based many of his own compositions, especially while in hospital when he was too weak to venture outside the grounds.

Van Gogh’s famed still lifes of his modest straw-woven chair in the Yellow House, too, can be traced back to an almost identical illustration in an unfinished Dickens novel called The Mystery of Edwin Drood, created by English artist Luke Fildes. The resemblance this time is obvious, and the strongest case for British artists having wormed their way into the consciousness of Van Gogh.

Anyway, methodically linking Van Gogh to the three years he spent in London was always going to be little more than a ruse to get you in the door to see some sunflowers. The highlights are all in attendance here. Hospital At Saint-Rémy depicts a row of red gnarled trees guarding the hospital buildings like massive wooden sentinels reaching off the canvas. His urgent and pulsating self-portraits have a presence and energy that can be felt even with your back to them.

His best known work, and the most recognisable painting of flowers in history, Sunflowers is on loan from the National Gallery for the first time since 1961, and here it appears in conversation with the British artwork it inspired.

Well, “in conversation” is a generous reading of the situation, in as much as Van Gogh painted a bunch of flowers and the British art world studiously followed long after he was too dead to reply. Any argument that Britain influenced Van Gogh’s work is secondary to the irrefutable fact, laid out in these closing rooms, that the impact went entirely in the opposite direction.