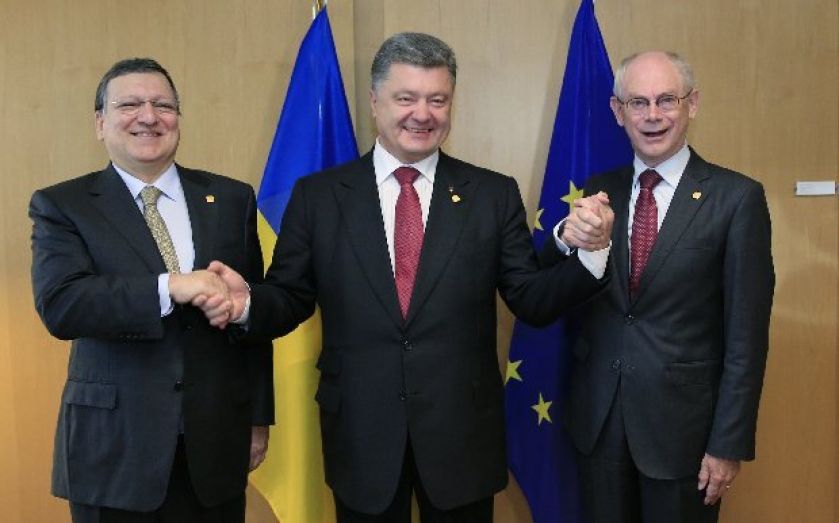 Ukraine, Moldova and Georgia have signed landmark free-trade pacts with European leaders this morning, binding the former Soviet states closer to the west.

The agreement slashes import tariffs between the countries and the European Union and is considered a watershed moment for the region: a marked shift away from Russian influence and Moscow's proposals to incorporate them in the Eurasian economic union.

The deal should anchor the economies of these three eastern European countries to those of EU nations, with the European Union expecting the signatories to meet its standards on the rule of law and human rights.

Ukrainian President Petro Poroshenko hailed the signing as the country's most historic day since Kiev declared independence from the Soviet Union in 1991.

Paving the path to EU accession?

While the pact itself is no precursor to joining the union, Poroshenko expressed his hope that it would signal the beginning of preparations for joining to bloc.

"Ukraine is underlining its sovereign choice in favour of membership of the EU," he said.

Following the signing, Moldovan Prime Minister Iurie Leanca said that he hoped his country would apply to join in the second half of 2015.

The deals had been in the pipeline for months and negotiations between Kiev and Brussels had been ongoing for years.

The final agreement however comes months after a decision by former president Viktor Yanukovych to turn his back on the EU in favour of closer integration with Russia sparked fierce protests and a popular revolt in the country.

The protests forced Yanukovych to flee Ukraine, causing a further schism in relations between Kiev and Moscow, as Russia annexed Crimea and fighting broke out between pro-Russia separatists in the eastern regions of the country.

The UN estimates that more than 420 people have been killed in fighting between pro-Russia rebels and government forces in eastern Ukraine since mid-April. A temporary ceasefire this week is set to expire today, but talks are anticipated to discuss the possibility of extending the truce.

How will Moscow respond?

The focus will now turn to how the Kremlin reacts to the news. Moscow is concerned that a rush of EU products will harm Russian exports and has repeatedly threatened repercussions following a potential deal. In a warning shot last summer, Russia blocked virtually all imports from Ukraine for a week.

Retaliation by Russia this time round could be more problematic for the Ukraine than for Georgia or Moldova, with 25 per cent of Ukrainian exports going to Russia.

Reacting to the signing this morning, Russian Deputy Foreign Minister Grigory Karasin told Interfax news agency that the "consequences of the signing by Ukraine and Moldova no doubt will be serious".

“The anti-constitutional coup in Kiev and the attempts to impose on the Ukrainian people an artificial choice between Europe and Russia pushed society towards a schism, a painful internal confrontation.”

Ukraine is also in a protracted spat with the Russian authorities and Gazprom over Kiev's gas debts, with the oil giant cutting off gas supply to Ukraine last week.