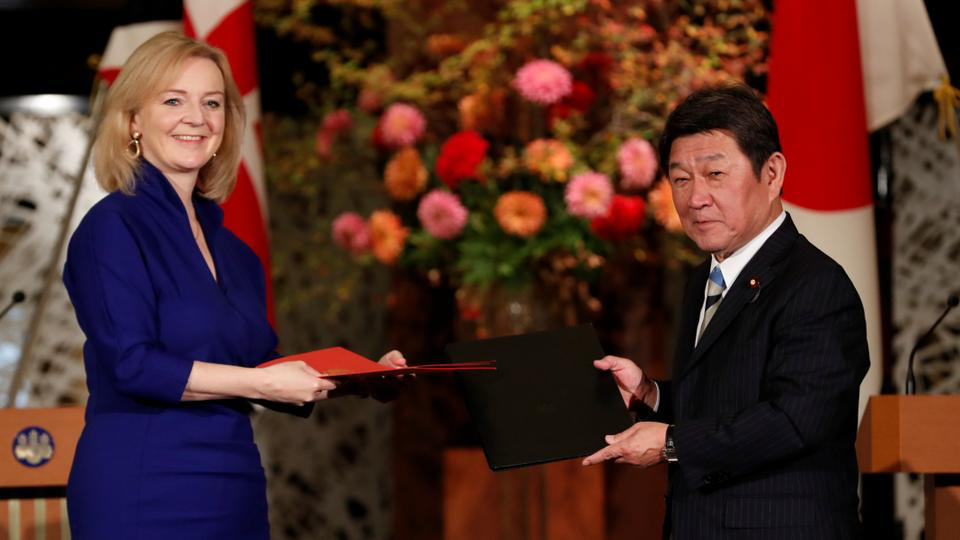 Britain has officially signed a trade deal with Japan, marking a major milestone in Brexit negotiations as the UK secured its first agreement as an independent trading nation.

The British embassy in Tokyo today announced it has formed the UK–Japan Comprehensive Economic Partnership Agreement (CEPA), which was agreed in principle last month.

Read more: Finance not fish: The trade deal with Japan focuses on what matters for the City

The government said the deal would bring together two of the world’s most technologically advanced nations, in an agreement that will boost trade between the UK and Japan by more than £15bn.

UK businesses will enjoy tariff-free trade on 99 per cent of exports to the country, in a “British-shaped deal that goes beyond the existing EU agreement”, the Treasury said in a statement.

“The  deal is tailored to both economies and has secured that [it] goes beyond existing EU deals, with big benefits for digital and data, financial services, food and drink, and creative industries,” it added.

International trade secretary Liz Truss said: “Today is a landmark moment for Britain. It shows what we can do as an independent trading nation, as we secure modern and bespoke provisions in areas like tech and services that are critical to the future of our country and the reshaping of our economy.”

“Trade is a powerful way to deliver the things people really care about. At its heart, this deal is about creating opportunity and prosperity for all parts of our United Kingdom and driving the economic growth we need to overcome the challenges of coronavirus.”

The government said the deal would support British car and rail manufacturing jobs and lower tariffs on products like pork, beef and salmon. UK consumers will also have access to cheaper, high-quality Japanese goods under the agreement.

Truss added that the deal opened a “clear pathway to membership of the Comprehensive Trans-Pacific Partnership”, in a move that would strengthen ties with a major democracy and investor in Britain.

Dame Carolyn Fairbairn, CBI director general, said: “The signing of the UK’s first independent trade agreement is a milestone for our economy and will be welcomed by businesses in many sectors.

“This deal has the potential to support jobs across the country through lifting British farming exports and supporting our manufacturing and services sectors. Consumers will also benefit through greater choice.”

A deal with Japan will likely boost UK GDP by around 0.07 per cent over 15 years and increase British wages by £800m in the long run, according to government analysis.

It comes as UK negotiations with Brussels entered their eleventh hour this week, with hopes for a UK-EU trade deal running slim ahead of the transition period deadline on 31 December.

The EU’s chief negotiator Michel Barnier has said he wants to make “every day count” after stalled talks resulted in a hostile stand-off between the UK and the bloc last week.

The government has said it aims to secure free trade agreements with countries covering 80 per cent of UK trade by 2022.

Allie Renison, senior policy advisor at the Institute of Directors, said: “This standalone trade deal [with Japan] could be the cherry on top if the UK manages to land an EU deal as we exit the transition period.”