Not only is Uber disrupting the way we travel, it's eyeing up the way we eat too.

Now Londoners will be able to get food delivered from top restaurants straight to their door via an app in exactly the same way they now order a car.

The separate UberEats app will let users order from a handful of restaurants initially, between 11am and 11pm, seven days a week.

Burrito chain Chilango and Vietnamese restaurant Pho, as well as The Good Life Eatery, Hotbox, Comptoir Libanais and Snog are among the 150 eateries on the app.

The Square Mile, Soho, London Bridge and Kensington are among the locations in central London where UberEats will be available at first, but the firm said it plans to expand the service further in the coming weeks.

"The UberEats app has been a huge success in every city we’ve launched in and we think Londoners will love it too," said general manager of UberEats London Alex Czarnecki.

Uber is tempting users to join with no minimum order and free delivery for the first month.

Where you can order UberEats 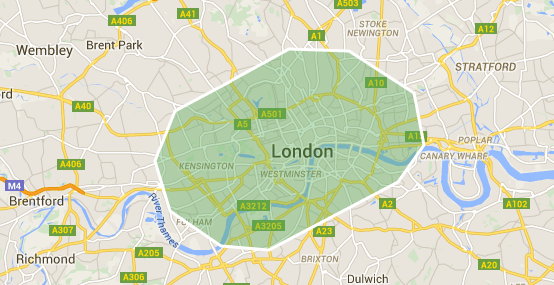 UberEats first launched in California in 2014 and has since expanded to 17 cities in the US. The UK is the second market for UberEats in Europe after it launched in Paris last year.

The hotly anticipated launch will put it in competition with one of London's most popular startups, Deliveroo. However, the well-established British firm now delivers in 12 countries around the world and several cities across the UK, with 1,500 riders delivering across the capital alone.

Founded in 2013, it signed a high profile deal with Pizza Express to deliver the popular chain's food in the UK for the first time, adding to other well-known names such as Gourmet Burger Kitchen (GBK) and Carluccio's.

The startup, backed with $100m (£71m) in funding from the likes of Accel, Index Ventures and Greenoaks Capital, remains confident, however.

“The entrance of UberEats would show there’s a lot of demand for new approaches to food delivery in the UK. Indeed, we believe we’ve created a whole new market," a Deliveroo spokesperson told City A.M. when it was first confirmed that UberEats would soon be coming to the capital, less than two weeks ago.

"We differentiate from the competition through our passion and focus on great quality food. We’ve built strong relationships with many fantastic restaurant brands throughout the UK as well as internationally. We’re growing on average 25 per cent month-on-month, and constantly expanding into new cities. We see enormous room for further growth and innovation in this sector.”

The popularity of food delivery in the UK created one of its most well-known startup success stories with Just Eat, which floated in 2014 with a so-called unicorn valuation of more than $1bn.

Meanwhile, one of London's Uber-based car-hailing rivals, Gett, has also experimented with delivering food and drink, including salads, champagne and wine.