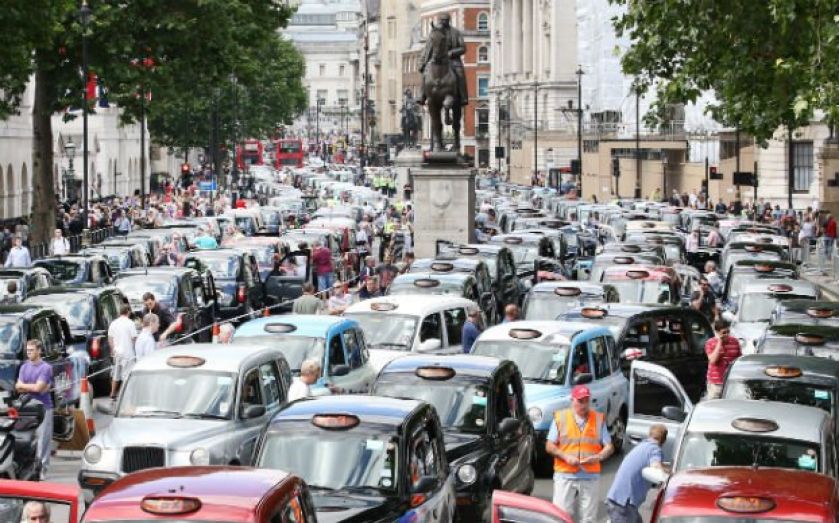 After protests against the San Francisco startup swept Europe yesterday, Kroes wrote "we cannot address these challenges by ignoring them, by going on strike, or by trying to ban these innovations out of existence."

“The disruptive force of technology is a good thing overall. It eliminates some jobs and it changes others", she added. On Wednesday, London saw 4,000 black cabs cause widespread disruption across the west-end.

Organised by the Licensed Taxi Drivers Association (LTDA) was primarily aimed at Transport for London (TfL) for their decision to grant Uber a private hire license.

The LTDA argued that Uber is not compliant with laws regarding taximeters. TfL has held the position that Uber's app does not constitute a taximeter, which can only be used by black cabs.

However, the protest seems to have massively backfired, with Uber reporting a colossal 850 per cent rise in the number of people who had downloaded the company's app, compared to a week earlier.

Uber drivers calculate the fare charged to passengers using an app with data about the time and distance of the journey traveled.

LTDA warned there could be further demonstrations in the future, with trade union Unite pledging support for the taxi drivers and saying it too would not rule out repeated protests. TfL has referred the matter to the high court.

It wasn't just London cabbies who used yesterday vent their fury at Uber. Up to 30,000 taxi drivers across Europe were involved. Drivers in Milan set up gazebos at taxi stands and handed out information about their grievances.

However, taxi drivers protests against Uber did not pass entirely without opposition. In Berlin, as striking taxi drivers made their way to the Olympic Stadium, they were greeted by activists from Students for Liberty (SFL) holding signs that read, "Taxi monopoly is so yesterday!”.

The counter demonstration met with a belligerent response, with some taxi drivers allegedly throwing coins and snatching signs out of the activists' hands.

Frederik Roeder, SFL's vice president for communications told City A.M.: "The taxi industry should understand that they should cope with their new competitors by increasing their customer service and lowering their prices. The opposite happened: The Berlin Taxi Guild just recently raised the fixed rates by almost 7 percent. They ask for more protectionism and fight competition at courts".

The group argues that the taxi industry's business model is hopelessly out of date and needs to adapt to the 21st century instead of relying on regulation to keep out competitors.

"If this strategy would have been the Gold-standard of doing business in the past, we would still be driving around in horse carriages, light our homes with candles, and monks would still produce
each and every book," said Roeder.

Yesterday's demonstrations were the latest in a series of long running battles between Uber and the continent's established taxi industry. Uber has suffered from regulatory restrictions in France, Belgium and Germany.

Some Europeans hostility to the private hire company has had little impact investors, with a valuation of $17bn after securing $1.2bn of primary capital in a new round of funding last week.