Spend enough time in the Greenlandic wilderness and everything starts to take on a cinematic quality. Inky waters roiling with dolphins seem like they should be scored by the soaring strings of an orchestra. Cathedral-sized icebergs, like colossal sparkling geodes, pass gracefully in the manner of silent film stars. Everything looks like opening credits; a slow-motion, sunburst-speckled panorama of the most picturesque sort.

Which makes obscenely alluring Greenland the perfect place to learn how to take a half-decent photograph. As part of Natural World Safaris’ new RAW itineraries – designed to take guests as far as possible off the beaten track of much-loved destinations – my 10-day trip has thrust me deep into the beguiling fjord system of Scoresbysund on the country’s wild east coast.

Although on a map it looks like nothing more than a shark-bite snatched out of the land, the area is actually larger than the whole of Iceland, with many of its tendril-like fjords having never been explored by a commercial vessel like ours.

Fortunately, and to ensure we do this pocket of ice-encrusted wilderness the aesthetic justice it deserves, professional photographer Andrew James is also accompanying our small group, to help us (well, me – most of the other guests seem to know their way around a tripod) get to grips with shutter speed, aperture and white balance as our fingers freeze. 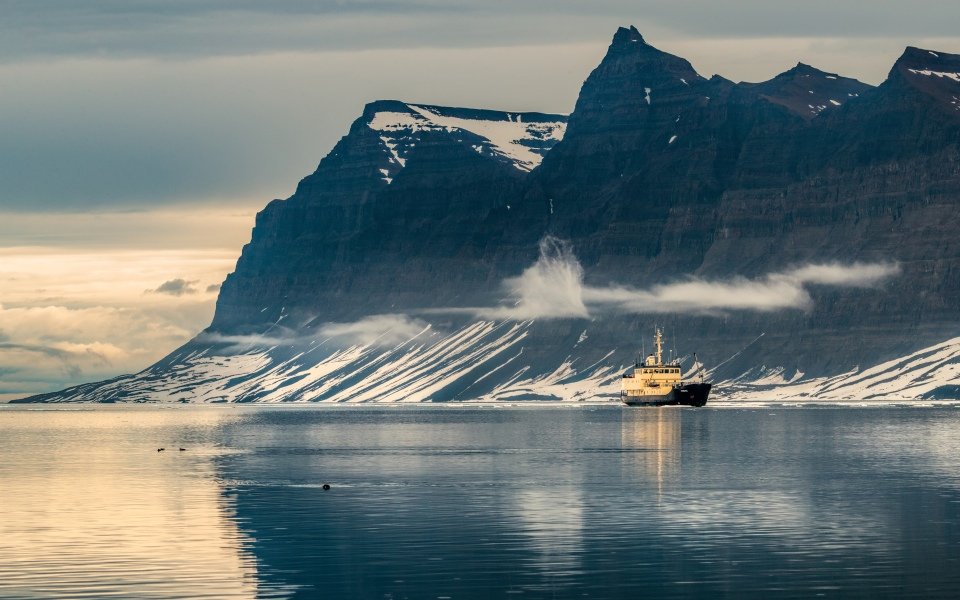 We spend our days on board the M/S Freya, a small but well-appointed 11-cabin ship, captained by Bengt Wiman, a crinkly-eyed, snow-bearded Goteborg native who describes his ideal adventure as a leisurely sailing trip through the Outer Hebrides. When we’re not cruising through the dazzling ice, we pile into small zodiacs steered by our intrepid guides Beau, Hadleigh and Jens (Canadian, British and Swedish respectively, whose stories of polar bear encounters and near death experiences in the Arctic keep me goggle-eyed over dinner each night). We weave through tapestries of electric blue icebergs before striking out onto the earthy tundra to hike or search for mighty musk-oxen to photograph.

But what’s perhaps the most beautiful is what happens when nothing much happens at all. Alone on deck, as the soft wind whispers through my tangled hair, I simply stand and watch as huge forts of ice float quietly through the doldrums – the ghosts of the old Inuit hunters that once glided across these waters peppering the air.

This, it transpires, is not the easiest task. The skittish animals – that look something akin to overgrown ewoks crossbred with highland cows – are still hunted by local inuits. So getting close enough to frame them in a camera lens can be tricky. Over grounds littered with arctic fox dung, amethyst-coloured fireweed and bleached oxen skulls, and with the low rumble of icebergs calving like thunder in the distance, we stalk the beasts – ducking behind rocks and even lying flat on our bellies to disappear into our surroundings. Eventually, and after much practice, we get close enough to photograph the animals, the amber-hued evening light cloaking their fur with a rich glow. 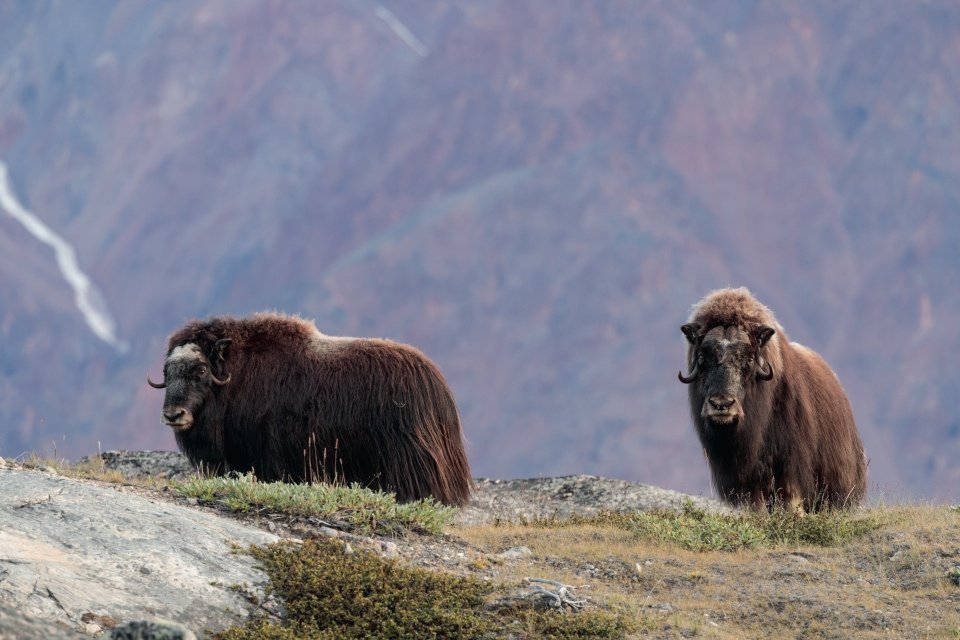 Camera obscura​
Wildlife photography, I discover, is a hit and miss affair. Humpback whales, when we meet them slap bang in the middle of the Denmark Strait – the tempestuous body of water between Iceland and Greenland – are frustratingly difficult to capture: their bulbous white bellies hanging too far below the surface to do justice to in a photograph, their flukes flashing too fleetingly to capture. The birds, however, are much more willing to co-operate. The low swoop of an arctic tern over the blue-black ocean makes for a beautiful shot, I discover (when I get my camera settings in order). As do the tiny flocks of little auks, bobbing about on the waves like flotsam, or perching in the crevices of moon-white icebergs. Gannets dive for fish in picturesque fashion – their sleek feathers offering up tiny bubbles as they plunge into the depths. Gulls battle mid-air for scraps too, their beaks like tiny jousting swords. Nature, certainly of the winged variety it seems, is quite happy to pose for my camera.

But what’s perhaps the most beautiful is what happens when nothing much happens at all. Alone on deck, as the soft wind whispers through my tangled hair, I simply stand and watch as huge forts of ice float quietly through the doldrums – the ghosts of the old Inuit hunters that once glided across these waters peppering the air. I gawp as we pass huge clusters of bric-a-brac basalt columns, and red-tinged cliffs that stretch upwards for what seems like miles, as if the horizon has been grasped and hauled directly upwards. There’s a silencing beauty in the coral-coloured midnight skies I see smeared with gossamer clouds and the monstrous lion’s mane jellyfish that hang bloated just below the surface of the water. In our several days exploring Scoresbysund we do not pass a single other human being. There’s no wi-fi, here. No means of contacting home. When we navigate a previously unchartered fjord – a truly momentous event – 350km from the entrance to the sound, there’s no-one else there to congratulate us. So we make do with one another’s beaming faces. We are suspended, it seems, in time and space. Forced to slow down and simply sail onwards. 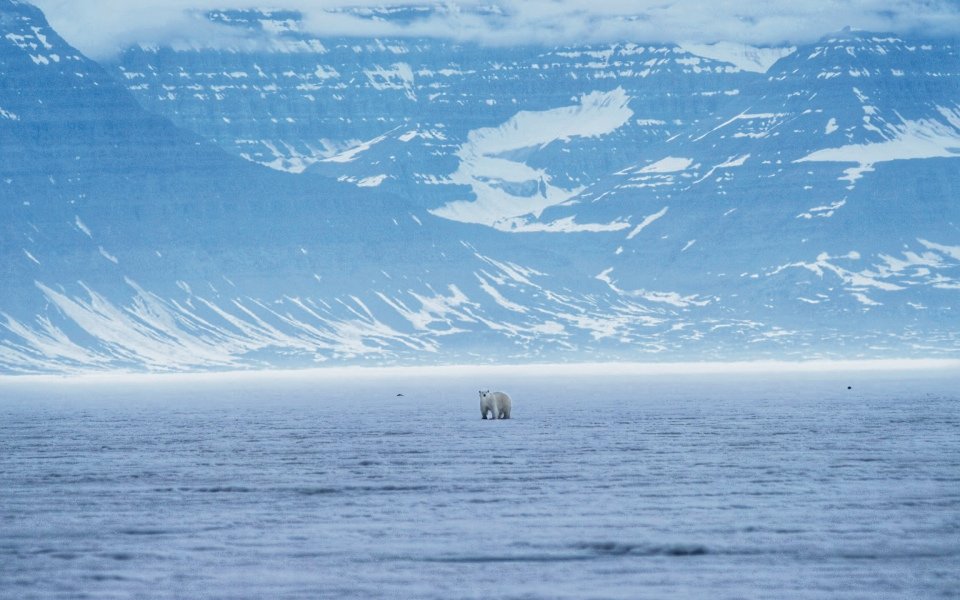 Ice bears
But there is high-adrenaline to be courted in these fjords. Namely in the form of the ghostly apex-predator that stalks the sea ice. We were warned before we set sail that we might not see any polar bears on our trip. Compared to the rich density of the predators in nearby Svalbard – where the animals are protected – bears are much more elusive in Greenland. You’d be lucky to catch a flash of white on a snow-slicked mountain as one disappears up a ravine. Which makes what happens on our expedition truly remarkable.

As we land in small bays, picking our way over huge whale vertebrae and long-forgotten reindeer antlers (the animals have been extinct in these parts for over 150 years) Hadleigh points out tent rings, old grave sites and the remains of Tuli houses – a clatter of stones and cramped crawl spaces, some 800 years old.

One afternoon, I head out on the blustery, rain-beaten deck with my binoculars to scout the shores of the surrounding beaches. Suddenly, I see it. A yellowish mound on icing sugar snow. It can’t be, I think, as I squint again through rain-splattered lenses. It is. I head up to the bridge to tell the guides sheepishly that I think I’ve seen a bear. Hadleigh has spotted it too. “It’s good,” he says. “To the zodiacs!” Once in the water we motor slowly towards the bear, picking our way through shearing shards of ice until we’re close enough to see it’s a healthy looking male. Floating silently just off-shore we watch as it wallows sleepily in its self-made snow drift, before sniffing the air with coal-black snout, scouting about the shoreline and then plunging into the water to swim – somewhat alarmingly – directly towards our tiny boat, eventually veering off course to disappear into the icy ocean. “I have seen about a thousand bears and this is a crazily good encounter,” says Beau as we putter away from the bear, a huge grin wrapped across his face. “I’m actually shaking.”

The sightings continue. One morning I get a knock on my cabin door from hawk-eyed guide, Jens. “Polar bear on the fast ice,” he announces excitedly, and I sprint out of my room, pulling on my down jacket with a clatter of photographic equipment behind me. We see sleeping bears, bears tobogganing down snowy slopes on their bellies and family groups making their way slowly across this vast land. At one point we stand on deck, watching a mum and her two cubs suckling and then devouring a seal carcass, tussling over stringy entrails, staining the snow crimson with blood. All in all, we spot 16 of the magnificent animals, and I do my very best to capture the incredible sights on my camera. 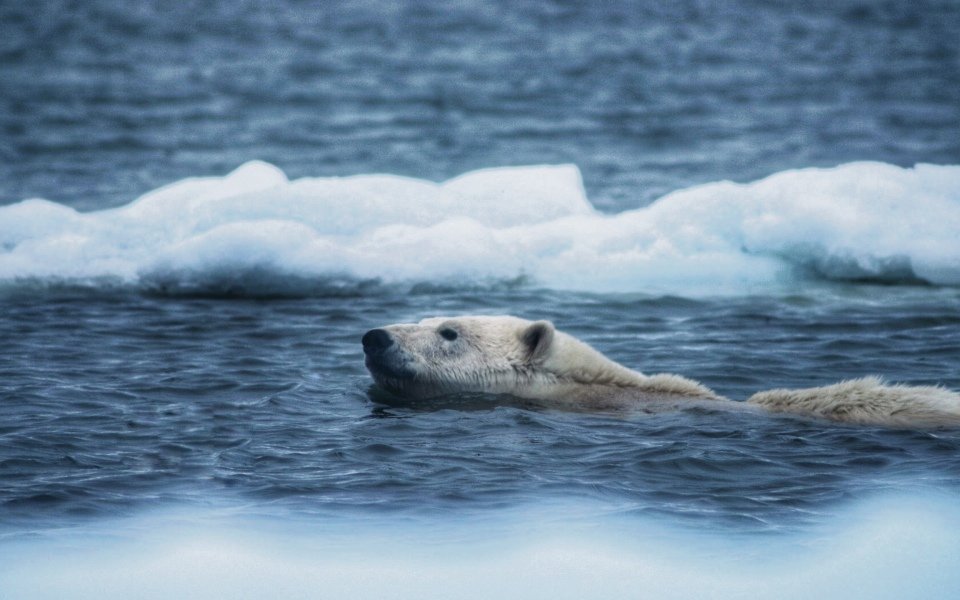 But there are other signs of life in this harsh, high arctic environment (where, with wind chill, temperatures can plummet to -100 degrees). People did once live here – engulfed by the deafening silence of the place, watching the aurora borealis dance in the night sky as they clustered around their crackling fires.

As we land in small bays, picking our way over huge whale vertebrae and long-forgotten reindeer antlers (the animals have been extinct in these parts for over 150 years) Hadleigh points out tent rings, old grave sites and the remains of Tuli houses – a clatter of stones and cramped crawl spaces, some 800 years old. He hands us carved arrowheads, tools made from mandibles and intricate bone knives that all hold beguiling secrets of the people who lived here centuries before we ever set foot in this place.

Greenland bewitched me, truly. Snaring me in its icy grasp like the winds that shriek across the ocean. I tried to capture as much of it as I could from behind the lens of my camera – no matter how fuzzy or poorly composed the resulting pictures may be – but, what will stay with me forever is the privilege of being a visitor, albeit fleetingly, to this magnificent, hidden land.

Natural World Safaris offers small ship expeditions to the High Arctic starting from £7,295 per person. See naturalworldsafaris.com for more details or call 01273 691642 to make a reservation