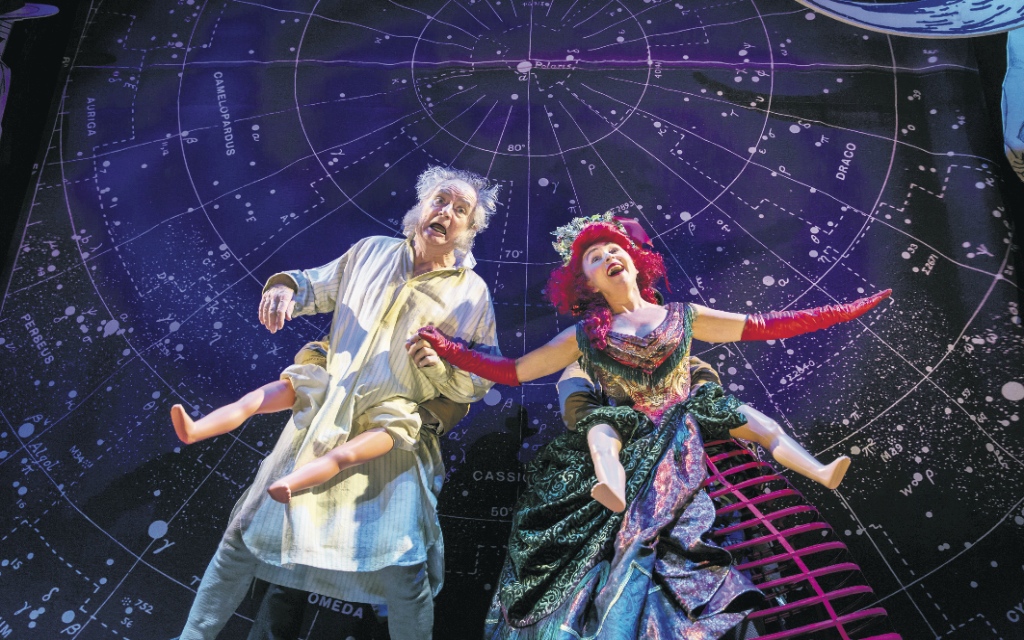 If pantomime’s a bit too shouty and daft for your tastes but you’re still in the market for something festive, this flamboyant production of A Christmas Carol ticks all the right boxes. Jim Broadbent plays miser Ebenezer Scrooge with a twinkle in his eye and a skip in his step. At first, it seems a bumbling performance but, as the play goes on, it becomes apparent that it’s actually just rooted in a chilling reality. His Scrooge is simply a miserable, grief-stricken old man who resolutely believes his own hype, rather than an evil soul.

His interpretation is not only cuddlier than most but is also probably closer to Dickens’ vision: the spirits haunt Scrooge because they believe he’s capable of redemption. However, the rest of the show plays fast and loose with the text, inventing a cruel headmaster and a letter from his deceased mother into the mix. Some changes serve to reinforce the play’s message, but others confuse matters.

Slapstick touches, like the frequent use of puppetry and a rudimentary fold-out set, are charming, but it falls down when it tries to convert giggles into grief. The imminent death of Tiny Tim is barely mentioned and when it’s Scrooge’s turn to confront mortality, they choose to break the fourth wall, point out the audience, and remind him it’s only a play after all, rather than tackling the darker matter.

It may be lacking in Dickensian heft, but when it’s spreading Christmas cheer, this carol’s a cracker. 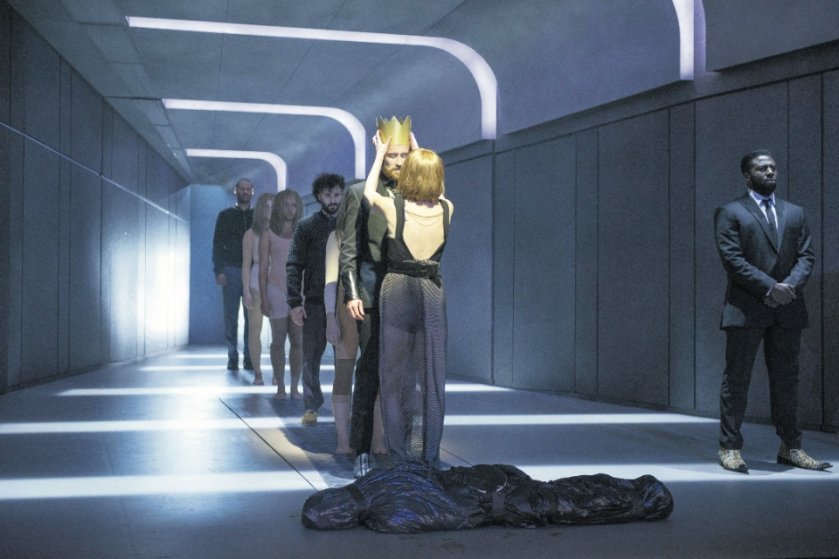 The cast of Macbeth at the Young Vic

This production of the Scottish play feels like a curious mix between Homeland, Bladerunner and being stuck inside the Rotherhithe Tunnel. The soldiers are dressed in contemporary military uniform, the soon-to-be stabbed-to-ribbons royalty strut around in retro-futuristic jumpsuits, and the stage is a perspective-skewing concrete underpass that shrinks away to a tiny entrance far away.

Witches in flesh-coloured onesies crawl out of that cramped entrance, their heads brushing along the subway’s ceiling as they lurch and body-pop around the stage, their size seeming to shift as they prophesise in meddlesome harmonies. Thanes are electrocuted in Abu Ghraib-ish cubicles. Banquo is done in with a plastic bag and a roll of duct tape. The points are all clear: war is grim and dastardly; Macbeth’s a proper bastard who thrives in it.

There’s also a great deal of dancing. The Macbeths’ fateful house party is particularly rocking, with industrial techno compelling the cast to jerkily flounder about the place for a solid few minutes. The bizarre form of modern dance is awkward to watch, and it’s reprised to weak effect during long battle scenes. Ostensibly an important part of the production, the repetitive choreography will only leave you wondering if it was worth bulldozing chunks of Bill’s regicidal script to make way for it.

You For Me For You, Royal Court

Two famine-starved sisters are separated during an attempt to smuggle themselves out of North Korea in this surreal play from Korean-American playwright Mia Chung. The younger Junhee escapes to New York, while the weaker Minhee is doomed to stay behind, both figuratively and literally becoming trapped down a well.

We follow both of their split fates, as Junhee is slowly absorbed into some very bluntly depicted capitalist consumerism, while her sister becomes lost in the tangled and morphing bureaucracy of the cultish regime. As the rapidly westernising Junhee goes to football games and earns promotions, a downbeat Minhee picks Kimjongilia flowers for blue obedience tokens. It would be a cripplingly trite set of contrasting cultural observations if this play took itself seriously, but the satirical You For Me For You is kept buoyant by its magical and silly tone.

Creative stagecraft and projection combine with angled, mirrored walls to produce astonishing spectacles on the Royal Court’s tiny upstairs stage. Actors pop out of hatches. Trees grow ears amid conspiratorial chatter. Rice sings. Frogs talk. And cleverly, American-English is first spoken on stage as unintelligible gobbledegook, before our and Junhee’s ears begin to unscramble and learn the new language as the play progresses.

Such supernatural oddness makes for an utterly enchanting play.