“Trinidad and Tobago” suggests two islands of roughly equal size, but the former is 16 times bigger than the latter, its population 1.3 million  compared to Tobago’s 60,000. As is often the case in nations divided across two separate land masses, stereotypes dominate each side’s thinking about the other. Ask a Trinidadian about Tobago: “lazy, backward, too slooow!” Ask a Tobagonian about Trinidad: “busy, stressful, too dangerous!”
There is a grain of truth in the caricatures. Trinidad is an unruly, prosperous island with an economy propped up by vast oil and gas reserves (it’s the furthest south of the Caribbean islands, situated just 11km off the coast of Venezuela). Tobago, on the other hand, is known for birds, beaches and little else.
If Tobago is a sanctuary where rich Trinidadians go to get away from it all, then the small fishing village of Castara on the northern side of the island is a sanctuary within a sanctuary. It’s one of the quietest parts of the island, a place residents of Scarborough (Tobago’s tiny capital) refer to – somewhat incongruously to London ears – as “the countryside”. There’s a fisherman’s shack, a few bars populated by Rastas, and plenty of people "liming" (relaxing) under the beating sun.
The village is home to Castara Retreats, a complex of “rustic luxury” self-catering lodges over-looking the bay. The “rustic” bit is important: the only unhappy customers that owners Steve and Sue have ever had were ones who expected something a little glossier than the wooden open plan apartments they’ve got. They may not have chocolates on the pillows, but they do have all you could need for a comfortable spell in the Caribbean: glorious, west-facing views across the bay, luxurious beds with high-quality mosquito nets, a well-equipped kitchen. 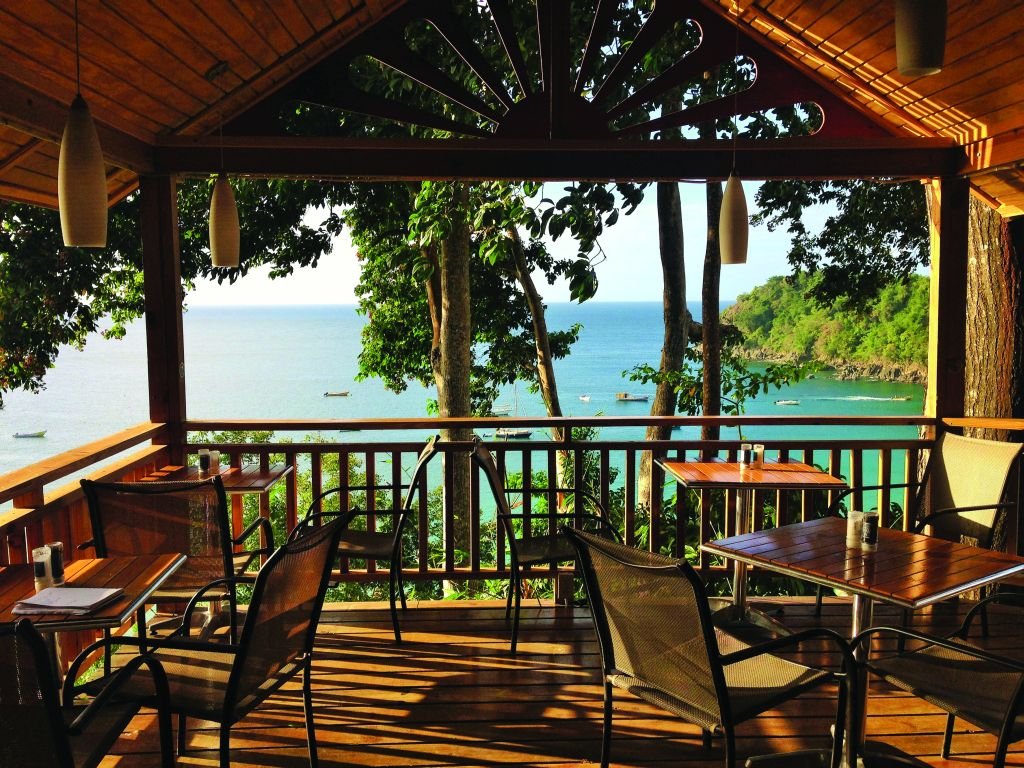 The restaurant at Castara Retreats

It’s a million miles from the plasticky cathedrals of tourism that dot the coasts of Barbados and the Bahamas. With fretted wooden shutters for walls, there’s no need for air-conditioning, and the openness allows for intimate contact with the island’s incredible fauna. From my hammock I spotted sting rays patrolling the bay below. Reading in the garden, I was visited regularly by agoutis, small guinea pig-like mammals native to middle America and the Caribbean. And then there’s the birds: hummingbirds, mockingbirds, martins, kingbirds, bananaquits – you can see why Tobago is destination for ornithologists.
Though owned by a Welsh couple, Castara Retreats is run by locals, staffed by locals and any activity you choose to do there – be it snorkelling or a boat ride around the bay – will be undertaken under the watchful eye of a local. As an example of sustainable, integrated tourism it’s been such a success that the government is using it as a model for further developments.
To stay there is to experience something approaching the “real Tobago”, which, as any Trinidadian will tell you, is slow, relaxed, informal.  In Tobago, business transactions are liable to dissolve into dinner invitations. During a fishing trip the driver of the boat asked how I planned to cook what I caught. “Err, a squeeze of lime, some garlic?” 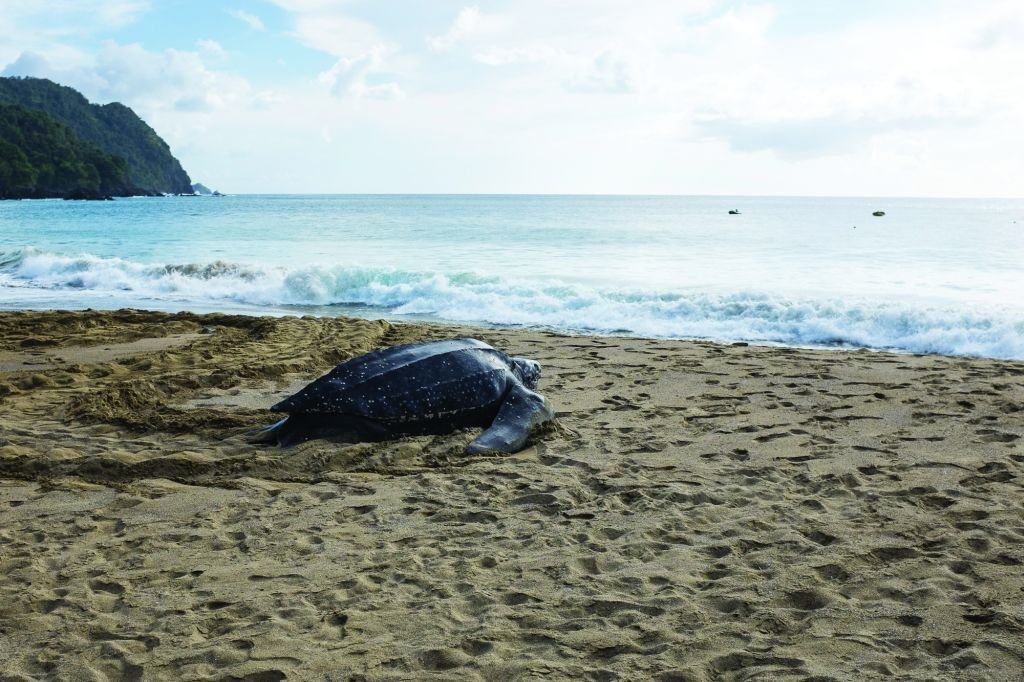 “No,” he said, shaking his head, and insisted he come round that evening and cook it himself, Caribbean-style. Forget “squeezes” of lime and “pinches” of salt: Tobagonian food is all about rich marinades and salty, spicy curries. The fish curry was the best I’ve ever eaten – I offered to pay him but he refused.
Later in the trip I asked another fisherman how I should prepare my fish. “Fillet it, grill it, rinse it in sea-water – the best seasoning in the world.”
The Caribbean is hardly known for its foodie culture, but the sun is so strong here, the fruit and veg so sweet, the fish so fresh, that cooking is one of the most enjoyable things you can do.  The avocados – rich, buttery, the size of melons – and tomatoes are unlike any you would find in the UK. 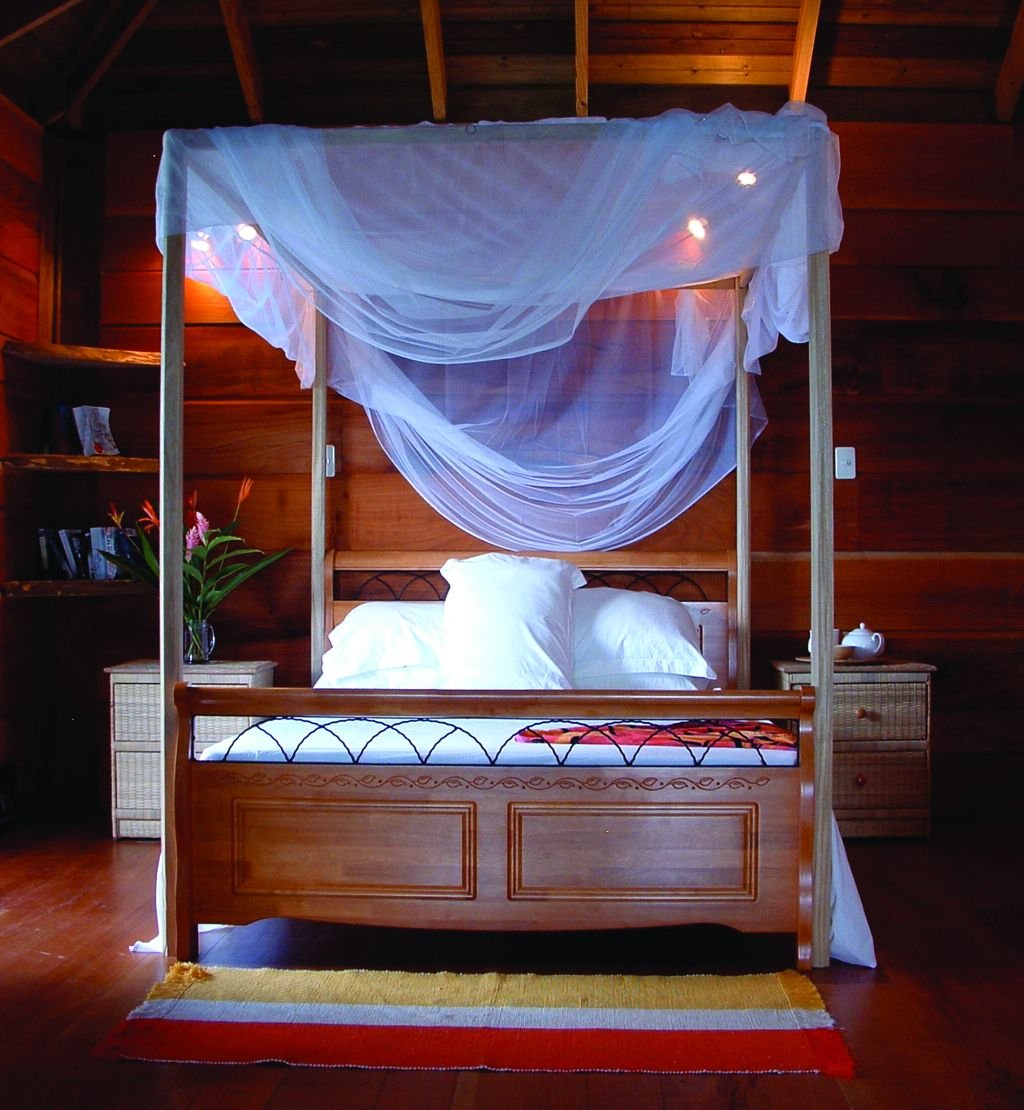 A bedroom at Castara Retreats

In the second week of my trip I left Castara and headed to Stonehaven Villas, a complex of 14 luxury holiday homes in the more developed southern part of the island. All the villas are expensively furnished and fitted with their own private infinity pools, but the complex is situated in a kind of nomansland between two villages. There’s a sense of being deliberately protected from the reality of Tobagonian life, which is a shame.
Places like Stonehaven are surprisingly few and far between. Plentiful natural resources mean Trinidad and Tobago isn’t as reliant on tourism as other Caribbean countries. The state is big. Government jobs aren’t difficult to get. But residents of the smaller island still have to be flexible and imaginative when it comes to making a living: the woman at Castara who gives yoga massages also earns money as a turtle conservationist; my bird-watching guide was also a lifeguard. 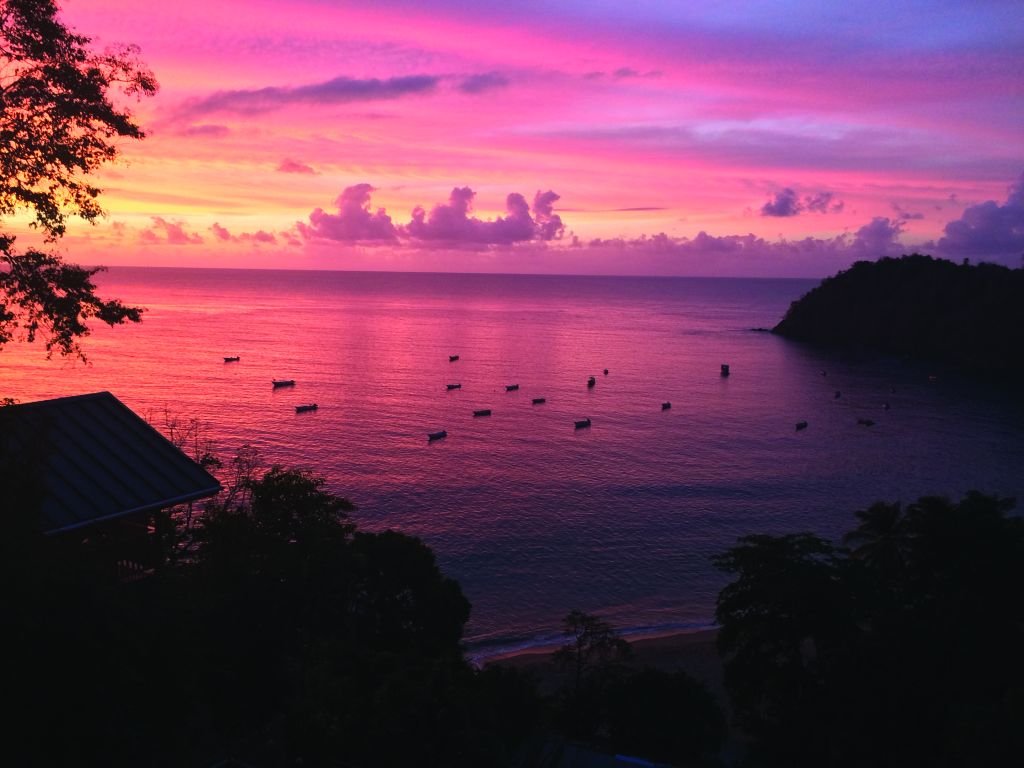 The view from Castara Retreats lodge

Most educated people seek their fortunes overseas, but Tobago’s most famous son, Dwight Yorke, maintains a close relationship with the island. I was told he can often be found sitting at Renmar’s restaurant at Pigeon Point, rum in hand, reminiscing about childhood on the island.
Pigeon Point is a large beach complex where well-heeled young Trinidadians come to tear around the coastline on jetskis. It’s on the southern tip of the island, and it’s one of the few places that feels aggressively touristy. Glass bottomed boats give regular tours to the Nylon Pool while teenagers learn to paddle-board in the evening light.
For all the water-based activities on offer, the appeal of Tobago still lies in its quieter corners: the birdlife, the rainforest, the small fishing villages. The slowness is all part of the appeal – don’t let a Trinidadian tell you otherwise.

Tobago trivia
The island is so-called because viewed on a map it looks like a special kind of tobacco pipe called a tavaco, which is popular with islanders

Goldenholidays.co.uk / 01403 755123 are offering a 7 night stay at Castara Retreats with flights from Virgin Atlantic from £829 per person based on 2 adults sharing “Firefly” lodge (lead-in studio) on a self-catering basis, to include return airport transfers based on 7 June departure.
For direct bookings, visit castararetreats.com.  A stay in Firefly lodge costs from £75 per night.
Alex also stayed in Stonehaven Villas: Golden Holidays are offering 7 nights in one of the 3 bedroom villas  (based on 6 adults sharing) at Stonehaven on a self-catering basis, to include a fruit basket, flower arrangement, welcome pack, return airport transfers and the services of our ground representative in Tobago from £993 per person.   goldenholidays.co.uk / 01403 755123
Direct bookings: stonehavenvillas.comTourist board website: visittobago.gov.tt