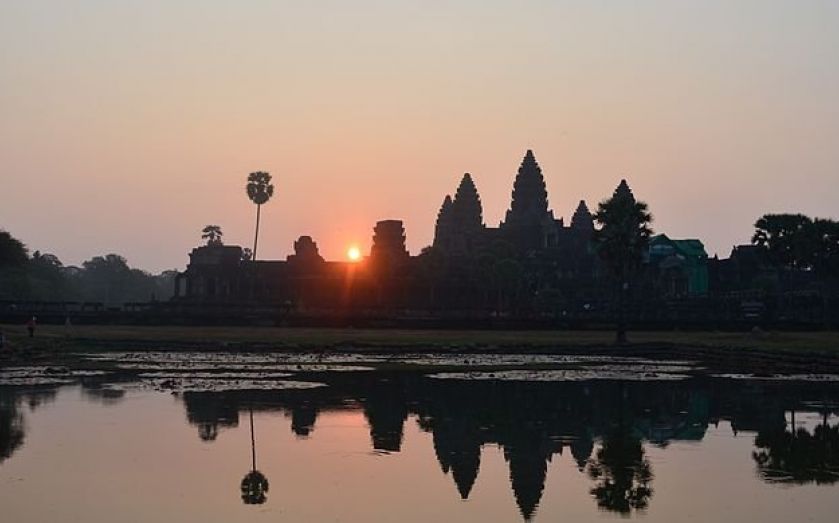 When I first went to Cambodia, the journey from the capital Phnom Penh to the temples of Angkor was a 12-hour (if you were lucky) minibus ride from hell.

That was 20 years ago, a time when friends might look at you as if you’d taken leave of your senses for venturing forth to a land etched in their minds with images of one of the worst genocides of the 20th century. Pol Pot, the Khmer Rouge and the infamous killing fields hardly seemed the stuff likely to inspire you to load up the rucksack and go exploring.

When peace came to the land nestling between Thailand and Vietnam in 1991, the backpackers arrived, but tended to tread an uninspired path, no doubt deterred by the huge amounts of ordnance dumped so unceremoniously by the Americans following raids across the border.

Many of those original backpackers followed in the footsteps of Sean Flynn, son of acting legend Errol, who had transformed his Hollywood “brat” image by taking on the mantle of war photographer. He initially covered the Vietnam conflict and later crossed the border to cover the disturbing rise of the Khmer Rouge – the same group that would later become his captors. Flynn disappeared in April 1970 at the age of 28 and was declared legally dead 14 years later.

Cambodia today is completely transformed. Happily that’s largely down to vastly improved infrastructure and a growing – and often impressive – choice of places to stay rather than any wholesale concessions to modern-day travel.

A country that once demanded a considerable effort from its visitors is now a much less onerous proposition and it has, in the process of change, become a destination that rewards the inquisitive and those who still like to feel they’re exploring paths untouched by mass tourism.

Much like other corners of the country, Phnom Penh is skilled at throwing up surprises and, although unrecognisable from when I was first there as a young backpacker, it still has much to reward the visitor. One of the best ways to get to grips with the city is by exploring its network of back streets where daily life continues much as it has for decades: cottage industries and artisan craftsmen ply their trades in shop fronts that cascade onto busy pavements; tuk-tuks jostle for road space with moped drivers, and street hawkers concoct authentic Khmer dishes with the minimal amount of equipment or fanfare.

Like other cities in South East Asia, one of the joys of Phnom Penh is simply sitting in a pavement café with a coffee (grown in the Mondulkiri province; sweet and strong) and a freshly baked croissant (a French influence remains in Cambodia) and just watching local life unfold.

It is here the Tonle Sap (the largest freshwater lake in South East Asia) converges with the mighty Mekong River and in doing so infuses the city with a seemingly never-ending sense of activity. It still provides locals and visitors with a bustling centre and a promenade in which to stroll, but ever-present development has diluted the charm a little.

This is a city where monuments such as the Royal Palace and the Silver Pagoda with its 5,000 silver floor tiles coexist alongside the scars of recent history. The decision to visit the Tuol Sleng Genocide Museum and the extermination camp at Choeung Ek (more infamously tagged “the killing fields”) is obviously a personal one but if you truly want to understand Cambodia then these are two sites it’s hard to ignore.

The road into the centre of Siem Reap in the north west of the country is not only gateway to the temples of Angkor it is also one now lined with a seemingly endless procession of international hotels.

At the height of the Khmer Empire, Angkor was the largest pre-industrialised city in the world. It was home to a million inhabitants and around 1,000 temples. Today it is the largest single religious monument on the planet with many of its treasures beautifully preserved as well as having Unesco World Heritage Site status and a place on the list of the seven wonders of the forgotten world.

With all of this comes mass tourism but with a little bit of research there are still some fabulous (and authentic) places to stay, while the effort you put into finding the right crowd-avoiding local guide will be well rewarded. The town of Kep is often referred to as Kep-sur-Mer, which gives you some idea as to its heritage. A favoured haunt of the Cambodian elite in the 1950s, it suffered greatly during the ferocious fighting between the Khmer Rouge and forces loyal to the government.

To the south of Siem Reap it is, for my money, a better and more interesting option than Sihanoukville, to which most travellers in search of beach life head. The latter is now rather touristy whereas Kep displays a charm rarely found on Asia’s coastline.

The Kep you see today bears the hallmarks of enterprising expats who have begun to rebuild and remodel the town, although relatively few of its once magnificent villas have been restored to their original grandeur. It is a mesmerising place and one can’t help but wish, however naively, that it is left as it is; the original architecture that remains is still pleasing on the eye and the scars of battle almost add to its impact. There’s not a tacky seaside shop to be found, the local wood shack restaurants serve some of the finest seafood in Asia, and hotels have been created or restored with considerable flare.

There is a colonial elegance and solitude to Kep that is quite intoxicating. Like much of this country in the second decade of the 21st century, it has an infectious optimism. And, as Cambodia discards but never forgets its traumatic past, you can’t help but hope it and its charming people enjoy a stability and prosperity so richly deserved; put it on your “to visit” list now.

Selective Asia (01273 670001; selectiveasia.com) offers a 12-day Cambodia in Style trip costing from £1,079 per person based on two people travelling and arranged on a tailor-made basis with private arrangements throughout. Flights are not included and cost from around £870 (including taxes) via Kuala Lumpur. Cambodia can also be easily combined with other countries in the region such as Laos, Vietnam and Thailand.