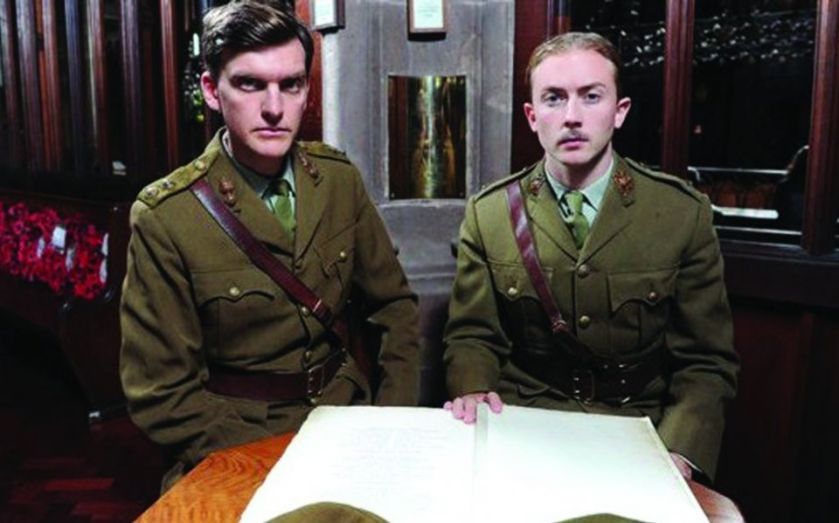 In a life otherwise blighted by misfortune, Wilfred Owen had one show-stopping moment of luck. When forced to take leave from the front line because of shell-shock in 1917, he happened to be referred to Craiglockhart War Hospital at the same time that established celebrity poet Siegfried Sassoon was interned there. The brilliant, tender Not About Heroes tells the story of how, under Sassoon’s awe-struck guidance, Owen metamorphosed from a psychologically broken boy into the foremost articulator of the Great War’s unspeakable savagery.

The younger poet is invested with stoic vulnerability by Simon Jenkins, a young actor who bears a startling resemblance to the familiar, serenely handsome military mugshot of Owen. Alasdair Craig is also pitch perfect as Sassoon, his sardonic world-weariness papering over, but never completely masking, the deep psychological wounds inflicted by the war.

The real joy of the production, though, is the poetry. The eager-to-impress Owen reading scrawled lines of verse to Sassoon, unable in his nervousness to see what is immediately clear to the audience: that Sassoon is overwhelmed by the perfect horrors stuttering from Owen’s mouth. Together they work on a collection with Sassoon acting as editor, suggesting a line break here, a change of vocab there (“Anthem of Dead Youth? Try ‘Anthem for Doomed Youth’”).

It is beyond sad that Owen was killed just as Sassoon was ushering him into the literary world to which he rightfully belonged. Sassoon implored Owen not to return to the front, but though the poets were able to see wartime propaganda for what it was, they were still subject to its pressure. Owen dreaded being labelled a coward. He was killed in action 4 November 1918, exactly one week before the Armistice.

Not About Heroes serves as a fitting tribute to man who wasn’t just a great war poet but a great poet full stop.