Theatre review: Kafka on the Shore 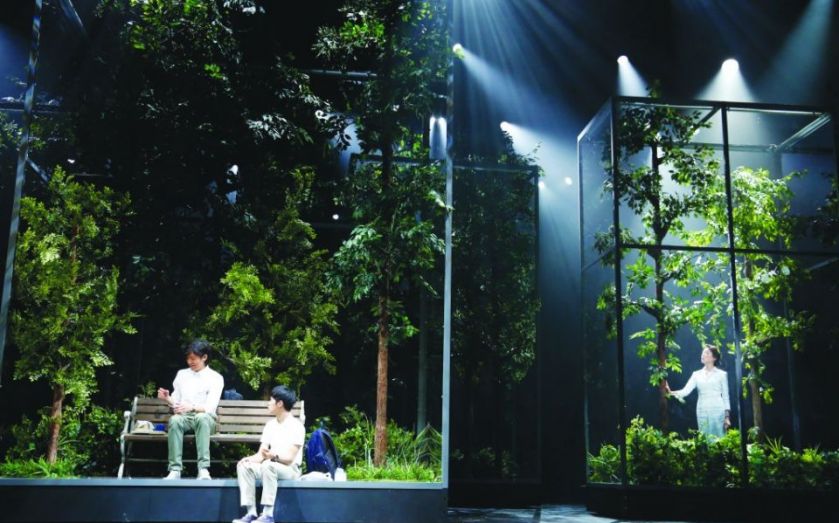 Barbican | ★★★★★
Haruki Murakami’s novel Kafka on the Shore is an ever-shifting mirage where dream and reality, past and future, here and there all twist and collide. It’s a book about ideas, encompassing western philosophy, Greek tragedy, psychoanalysis and science fiction. It should translate horribly to the stage, but legendary Japanese theatre director Yukio Ninagawa is up to the challenge.
His stage is a blank canvas, the elements for each scene gliding into view in giant perspex boxes. When his characters are lost in woodland, trees swirl around them. When they are in the city, neon signs and trucks veer into sight. Some boxes contain entire rooms, others just a urinal for an extra to relieve himself into. As well as allowing for some incredible choreography, it’s a neat metaphor for the hermetically sealed inner worlds in which Murakami’s characters reside, a place from which they can see others but never really connect.
Ninagawa’s play is necessarily leaner than Murakami’s 500-plus page novel, the narrative threads easier to hold onto. There are two interwoven stories, the first following Kafka, a young runaway who moves into a provincial library where he falls in love with an older woman. The second focuses on Nakata, a slow-witted old man who can talk to cats (and what magnificent cats they are: human-sized beasts that slink and leap across stage). Sent on a mission to find a lost pet, Nakata encounters the “infamous cat killer Johnny Walker” (yeah, the whisky guy), at which point his life begins mysteriously to  overlap with Kafka’s.
There are no shortage of heavy concepts to contend with: a prostitute (provided by KFC’s Colonel Sanders, who works as a back-alley pimp) spouts Hegel while on the job, Kafka ruminates on Adolf Eichmann’s detachment to his mass-murder, the Oedipus myth is neatly re-enacted. But it never feels dense or overwhelming, more like a warm bath of ideas that gently laps around you.
The acting is excellent (the play is in Japanese with surtitles) especially Katsumi Kiba as Nakata and Masato Shinkawa as Johnny Walker, and a genuine love of the material shines through. It’s a tour-de-force adaptation of an unadaptable novel.
Share
Tags: NULL