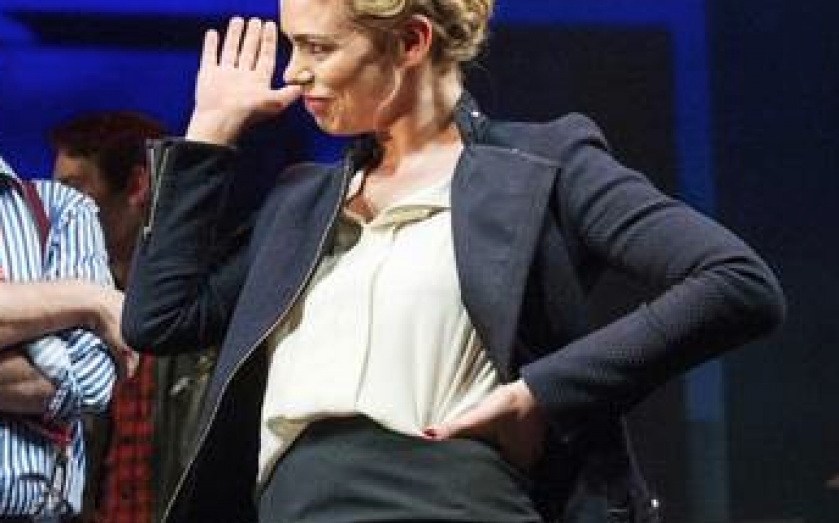 With inquiries, investigations, MP select committees and dodgy dealings between opaque institutions, phone-hacking was a very broadsheet kind of scandal. Sex was there, but it was in the background: at root, this was a story about people being in each other’s pockets, not beds.

Great Britain gives phone-hacking the tabloid treatment. It ratchets up the sex, cranks up the humour and presents the obscurely dodgy, suited main players as a seething cabal of cartoon ne’er-do-wells. One Man Two Guvnors writer Richard Bean’s maximalist approach takes in Mark Duggan, BSkyB, MPs expenses and UKIP in a frothy tsunami of contemporaneousness that would be too much if it weren’t so relentlessly funny.

Rupert Murdoch, Andy Coulson, Rebekah Brooks, Clive Goodman, Kelvin MacKenzie are given thinly-veiled analogues, all of whom are padded out with enough fictional details to keep the lawyers happy. Instead of an Australian media baron, there’s an Irish one (Dermot Crowley’s Paschal O'Leary). Instead of a fiercely ambitious editor-in-chief, there’s a fiercely ambitious news editor (Paige Britain, played by a brilliant Billie Piper). Britain works for a paper called The Free Press, a formerly left-wing rag which has enjoyed a lucrative nosedive into celeb kiss’n’tell naughtiness under the stewardship of O’Leary.

Rebekah Brooks was portrayed in court as a superschmoozer, who had an uncanny ability to shift personality according to whichever powerful man (it usually was men) she was trying to ingratiate herself with. However many personalities she has, two of them get characters in this. There’s innocent Rebekah, the one who performed superhuman feats of oral butter preservation in front of Leveson, and who couldn’t possibly have known about phone hacking because she was too busy fighting a global paedophilia pandemic. Innocent Rebekah is brilliantly parodied by Bean’s auburn-haired Virginia White character. Despite having the job title editor, White remains upstairs, away from the newsroom, blissfully unaware of the nefarious methods used to obtain her paper’s increasingly outrageous scoops.

Meanwhile, Piper’s Paige Britain – the Brooks many suspect might exist (but definitely doesn’t of course) – runs wild. She knows the power of sex. Yes it sells papers, but it also facilitates her personal ascent through the male-dominated media and political establishment. She flirts with the boss, sleeps with the police and jumps into bed with the prime minister. But most importantly she has an epiphany: the best kiss’n’tell stories are ones where you don’t wait to be told.

If there’s a hint of misogyny in the way the scandal pivots around a devious, hyper-sexual woman, Bean enjoys reminding us that there’s another culprit absent from the stage and above the law: us. Apart from demonic, stilettoed ambition, Britain is propelled by a twisted commitment to giving us – Great Britain – all the terrible things we want. As she declares in her valedictory monologue: to put all our sins onto one woman is too easy – this is a culture borne of our own salacious appetites.

What kind of newspaper could feed these appetites? One run on bullying and one-upmanship. One in which a deep-diving amorality is a precondition for progression through the ranks. I suspect Kelvin MacKenzie provides inspiration for Robert Glennister’s editor character, and perhaps there’s a little Paul Dacre in there as well (Dacre’s fondness for a certain word beginning with “c” led to his editorial meetings being dubbed the “vagina monologues” by staff). The spectre of Malcolm Tucker looms large. Like Ianucci, Bean is a poet of the profane.

The riotousness comes at a cost. Tabloid bombast is founded on a moral simplicity which sells papers but has a blunting effect when it comes to satire – a pantomime villain can only be so scary. Some will argue that sick-making cosiness between insanely powerful people demands to be tackled with a straight-face, that while we’re rolling on the floor laughing those on trial might wriggle from the dock and make a break for it. But this isn’t David Hare, and nor does it try to be. Sometimes it’s better to be harangued than lectured. You’re certainly less likely to nod off, an important point given the public’s noted lack of outrage about security-breach scandals.

Phone-hacking was more a question of unpicking and doggedly investigating than splashing and scooping. Finally it’s been told to us in a language us tattle-obsessed Brits understand: mad, bad and dripping with sex.