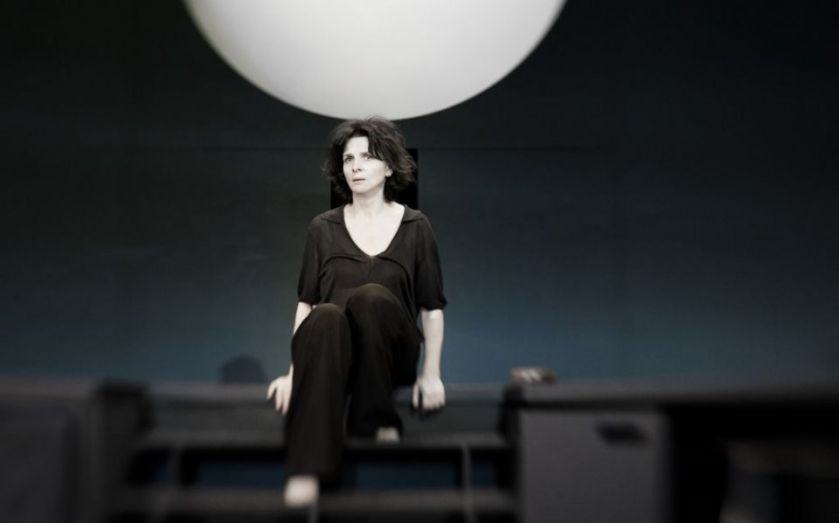 A new translation of Sophocles’ ever-resonant Antigone by poet Anne Carson is one thing, but add cinematic icon Juliette Binoche and director du jour Ivo van Hove – whose rapturously received A View From The Bridge recently transferred to the West End – and you have what sounds like a guaranteed success.
Unfortunately, this production is anything but. As Antigone, Binoche alternates a disengaging flatness with hoarse bouts of wailing. She feels detached from the play around her, rendered less a representative of familial passion than a self-absorbed showboater. Only when she returns as the Messenger at the play’s close do we finally catch some of her verve. And while Patrick O’Kane initially makes a superb Kreon, balancing a pragmatic obsession with order with an underlying paranoia, he gradually becomes a hissing pantomime baddie, farcical in his sputtering wrath.
Anne Carson’s script trades Sophocles’ force and floridity for something sprightly and spare, with an almost colloquial briskness.
This diminishes some of the play’s power – and occasionally leads to awkward lines – but it also opens it out to new styles of performance. Van Howe’s traditionalist delivery feels disjointed, with its oratorical speeches and amplified voices. The stark staging doesn’t help matters. After an atmospheric opening in a windswept desert, we are left marooned in a bland foyer. The screen at the rear, though possessed of a startling sun-shaped hole, is constantly bedecked with trite images of contemporary life.
The strong supporting cast – who double up as a five-part chorus – go some way to salvaging the production. Kathryn Pogson makes a heartrending Eurydike, visibly wilting as she learns of her son’s death. Kristy Bushell’s prayer-like coda closes the play with a plaintive quietude.
This is by no means a disaster. But, for a collaboration between three artists who have forged careers out of reinvention, it is disappointingly beige.
Share
Tags: NULL