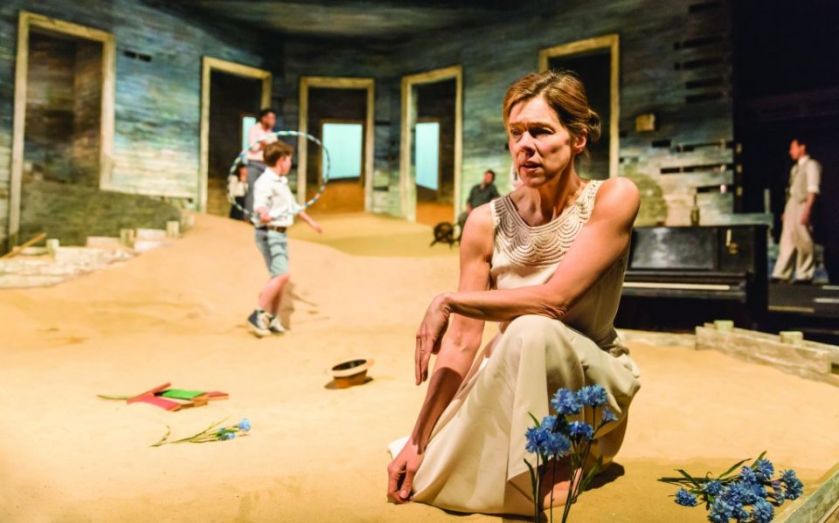 Young Vic | ★★★★☆
The life of American playwright and Nobel Laureate Eugene O’Neill was often tragic but in Ah, Wilderness! he mines his youth for comedy, and the results are unexpectedly delightful.
The action takes place over the 4 July weekend, 1906, mostly at the Miller family’s Connecticut beach house. They suffer from genteel dysfunctionality, which includes an incorrigibly juvenile, alcoholic uncle (played with infectious vim by an unrecognisable Dominic Rowan), and a grandiloquently rebellious son, who is steeped in history and poetry and the thrill of youthful romance.
Played by George MacKay, who strikes an admirable balance between absurdity and pathos, Richard is the key character. His falling out with a neighbourhood girl and subsequent attempts to drown his sorrows provide the narrative thread. But there is much to occupy the other actors in a play fizzing with lively dialogue, literary quotations and humour perfectly calibrated to modern sensibilities. Think late-period Woody Allen, if he had remained funny.
If the play is remarkably modern, director Nathalie Abrahami’s inventive production is decidedly postmodern. Dick Bird’s set takes advantage of the thrust stage to present a weather-beaten structure that is at once house, pier and groyne, all buried in drifts of sand. Characters act as stagehands, excavating props from the dunes as required.
The most notable and curious among them is a figure who might well be a representation of O’Neill (David Annen) – moving around the periphery of the stage, his reactions provide largely silent authorial commentary. The only real misstep are the costumes; an ahistorical mish-mash which, in contrast to the more deliberate strangeness surrounding them, seem too haphazard. But this is nit-picking, because Ah, Wilderness! is an ebullient embrace of a comedy, perfectly timed for the arrival of summer.