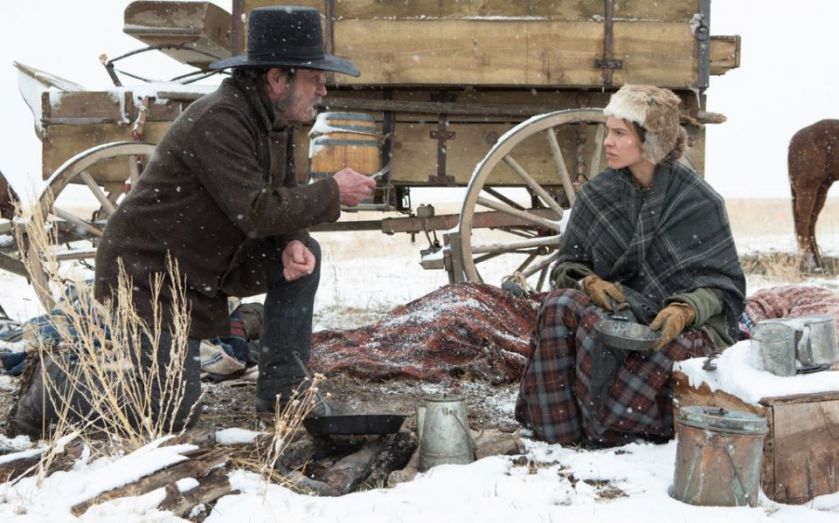 Cert 15 | ★★★☆☆
Many an American fictional character has dreamed a dream of loading up the wagon and heading way out west to roll the dice on the frontier. It says much of The Homesman’s contrarian spirit that it does the reverse. In his second directorial outing, Tommy Lee Jones trudges backwards through America, depicting the rootin’ tootin’ mid 19th century Midwest as a debased, venal world in which the pioneering spirit has crumbled into a pervasive spiritlessness.
There are no heroes, but there is a saint, and she goes by the name of Mary Bee Cuddy (Hilary Swank). Always alert to the call of duty, pious Mary generously agrees to escort three mentally unwell women back home from the frontier. She enlists the help of Briggs (Lee Jones), a vagrant who agrees to escort her on the condition that he receives $300 upon reaching their destination. The movie unfolds like a buddy road movie in which the buddies hate each other and there are no roads; only miles and miles of unforgiving wilderness.
It’s a brilliant performance from Swank, who subtly conveys the inner torment behind her character’s outer composure. Stoic and self-reliant, Cuddy elevates modesty to a resplendent virtue, only to be rewarded with mockery from her peers. All she needs to complete her perfect god-fearing life is a husband, but when she asks two men for their hand in marriage, they knock her back, calling her “bossy and plain”.
Plainly, Swank is anything but the latter. The consensus that she is is just one of the off-beat, absurdist touches that make The Homesman so distinctive. Moments of high-camp intrude on the barren landscape, providing respite from the darkness as the strange cargo makes its solemn journey. Really though, this is all about Swank and Lee Jones, whose odd chemistry transforms an interesting film into a great one.