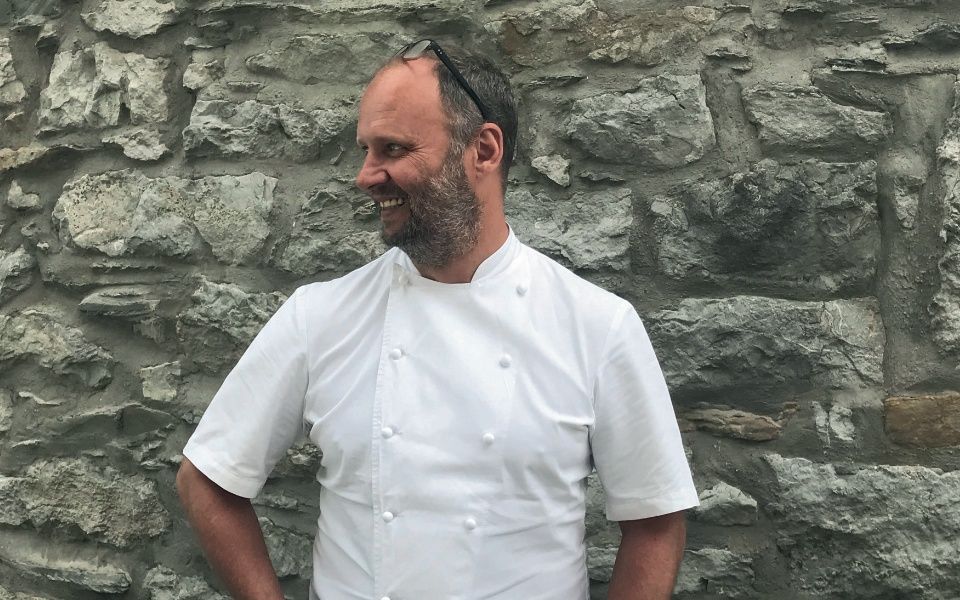 The first time I ate Simon Rogan’s food was during a culinary pilgrimage to L’Enclume, one of the world’s top restaurants. Over the course of five hours I ate 20 dishes, each one a spectacular fusion of science and gastronomy. Dehydrated fennel leaf topped with apple gel. Charred stripes of blackened leek with egg cream. Spiky tangles of pork and eel. In an eating career that must now span four digits worth of restaurants, it still stands as one of the best.

The second time was at the London outpost of his intimate Aulis, an eight-seater venue built around a chef’s table, where the finest cooks on Rogan’s books create experimental dishes in front of you, for the not-insubstantial price of £195 a head. Wearing the white hat that evening was Rafael Cagali, who was last month awarded two Michelin stars at his new venture Da Terra. The food that night included cones of crème fraiche topped with cubes of jellied damson and cep brioche fashioned into dainty little mushrooms sitting on a bed of moss.

The third Rogan experience, then, had a lot to live up to. The venue this time: the same four walls that have been my lockdown prison cell for most of the last 12 months. “If you’d told me a year ago I’d be running a home delivery service, I’d have laughed quite loudly,” says Rogan.

Rogan was among the first tranche of chefs to experiment with home delivery after Covid forced his empire to close. Counter-intuitively for a man inextricably associated with fine dining, his offering was for £5 meals, which were distributed locally around his Cartmel base of operations, with the profits going towards supplying free food to vulnerable people and key workers.

The first lockdown came at the start of spring, when Rogan’s farm was overflowing with produce that he didn’t want to go to waste. He describes the early days of his delivery business as “clumsy”, asking the local vicar who they should send the free meals to.

A year later, Simon Rogan at Home has distributed more than 50,000 “finish-at-home” dishes, fulfilling 1,000 orders a week with a waiting list half as long.

The delivery business has been so successful that Rogan has managed to retain all of his 164 staff, despite the closure of Marylebone’s Roganic. Moreover, he’s now expanded into a new 1,700sqft warehouse in the Cumbrian town of Flookburgh, which he’s already worried may not be big enough to meet soaring demand. He’s also expanded Simon Rogan at Home to Hong Kong, delivering meals created in the city’s (still open) outposts of Aulis and Roganic.

“Restaurants have changed forever,” says Rogan. “Even when we go back to ‘normal’ there will be people whose eating habits will have changed and there will still be demand for this type of service. We’re making sure that when lockdown finishes and the restaurants are full again, we have a team and premises that can still forge ahead with the outside meals.”

Rogan says he’s now selling more meals than ever before, with the capacity of the home-delivery business outstripping that of the restaurants, albeit with far lower margins.

“We haven’t done too badly financially. [The delivery business] is profitable and the name of the game is diversification. You have to do what you can to make sure the cash keeps rolling in until we come out the other side.”

When I visited L’Enclume in 2017 I took a detour via his already-thriving farm, consisting of irrigated poly-tunnels and vast allotments. The staff working there said the farm was one of the more highly-prized jobs, with some chefs preferring to work the land than the kitchen. The operation is bigger than ever now, with Rogan buying more land to expand the farm and feed the new business.

“We’ve done a lot of work this winter to take on more area and we’ve converted more space for growing. It’s getting a lot bigger – there are five people on the farm who have worked throughout [because] nature doesn’t stop. The guys from the kitchen go along to pick ingredients twice a day, new starters are on the farm before they are let loose on the floor so they have a clear understanding of our ethos. There are eight or nine people there on any given day, and they love it. People even go down there on their day off, which gives you an idea of what they think about it.”

Rogan expects his bottom line to exceed pre-Covid levels within a year, with his Cartmel-based retail business also “going through the roof” over lockdown. He’s also tentatively taking bookings for L’Enclume, although he describes the tables reserved for March as “optimistic”.

“We expect all the restaurants to get slammed when they are able to reopen. May, June and July are really gathering pace, which makes me think we’ll be really busy. Between July and November [last year] was the busiest time we’ve had since we opened in 2002. It was just unbelievable and I don’t see it being any different next time.”

One of Rogan’s few casualties over the last 12 months was Roganic, which closed after just three years. Rogan says an intransigent landlord coupled with pre-existing limitations of the space caused him to pull the plug.

“Before Covid, we were in negotiations to take [Roganic] somewhere else. We’d found a bigger and better site but Covid put paid to that. The lease was coming up and we wanted to bring it more in line with the Roganic in Hong Kong, which has been absolutely flying. The way it’s laid out works really well and we wanted to bring it up to that standard. But looking at the deal now it’s probably not right for us so we’re looking at another couple of opportunities. It’s not just disappearing – it’s coming back, it’ll just take a bit longer than we’d planned.”

Rogan says he’s also “looking at international projects”, with his sights set on restaurants in the US and the Middle East.

Unlike many of his peers, Rogan doesn’t seem particularly fired up over the government’s handling of the pandemic. “They dithered about and took too long to put things in place, but where would we be without furlough and the VAT cut? I’ve been campaigning for a minister for tourism and hopeful we’ll get it now. They could have done a bit more but these are extraordinary times and who could have predicted where we are now?”

True to form, he prefers to look inward, to concentrate on his own operation and let everything else fall into place.

The Simon Rogan at Home box arrives in a swanky brown paper package filled with cardboard take-away containers. There’s one menu a week, dictated by what’s in season on the farm. Costing from £45 for three courses, they’re far more cost effective than the restaurant meals, where a table can comfortably spend £500.

The meals are also far simpler. Mine was prepared at Aulis in Soho, although the majority are put together up north. It consisted of an outstanding ham hock terrine with pickles and prune puree on toasted brioche (all I had to do was put the brioche in the toaster), followed by a fish pie (bake for 30 minutes) with kale. Then tiramisu and cookies to finish. On paper, it’s the kind of stuff you might cook yourself. But this wasn’t just any fish pie – this is the Platonic ideal of a fish pie, the place where fish pies go when they die. It felt like a Rogan meal, every bite and crunch carefully orchestrated.

With change out of £100 for two, you can see this becoming a regular fixture in people’s lives, a half-way house between eating in and going for a meal. The Covid pandemic can’t end soon enough, but one silver lining is Rogan at Home.

• For more information go to Simon Rogan at Home.