The Memory of Water at Hampstead Theatre review 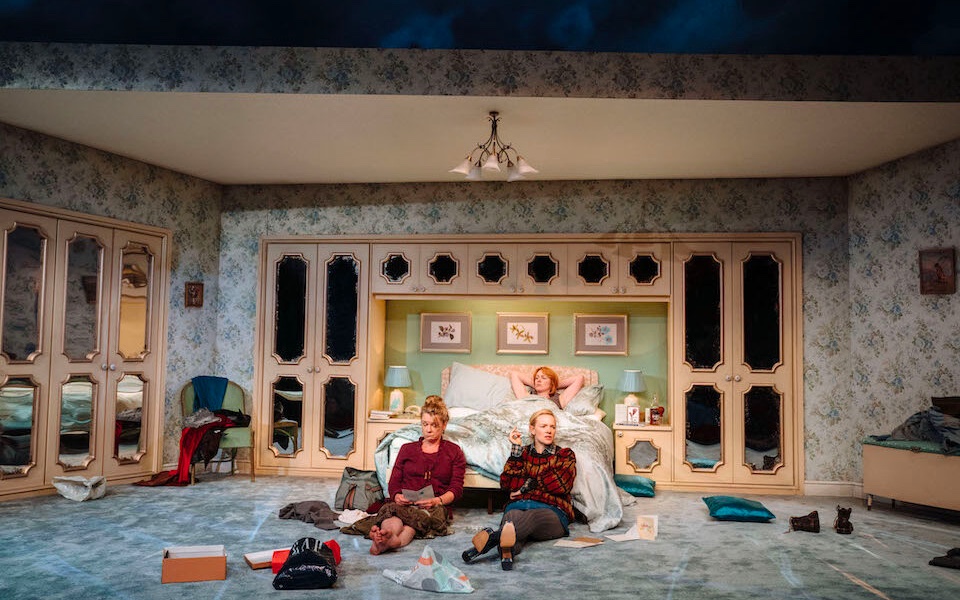 Some plays seem to never age, maintaining the feeling of newness and revelation in each subsequent staging. Recent productions of Under Milk Wood and The Dumb Waiter spring to mind, conjuring such a stark sense of otherness that they feel forever young. Others become period pieces before the ink dries on the script, such as A Taste of Honey and Rita, Sue and Bob Too, plays so thoroughly grounded in the mundanity and minutiae of the right now, that they immediately become back then.

Shelagh Stephenson’s 1996 play The Memory of Water falls into the latter category, its story of three sisters mourning the death of their mother offering as much of an insight into the psychology of 1996 as it does the intricacies of sororal relationships.

The entire play is set in the bedroom of the deceased matriarch Vi, which is decked out in the sort of faux-opulent style that Changing Rooms foist upon the nation. The three sisters each fit an archetype: Theresa, the eldest, is the family martyr, buckling under the weight of the good deeds she claims to perform for everyone else. Mary, a neurologist who’s having a long-term affair with a married man, is the successful one who looks down her nose at the others. Catherine is the chaotic one, forever disappointing everyone with her impulsiveness. These roles are keenly observed, carved into the rock of family history, shaping the person as much as the person shaped the role.

Through these relationships – pushed to breaking point by grief and whisky – Stephenson explores a loftier theme: the transient and unreliable nature of memory (the play’s title is a reference to the quack-science of homeopathy, which holds that water can maintain the properties of chemicals even when they have been diluted away). The three women share a ragged patchwork of collective memory, within which details overlap: nobody can agree on which one was once abandoned on a beach, for instance.

There’s also the idea that memory can keep people alive, most obviously Vi, a flawed mother whose memory becomes a ghost, watching over them and occasionally speaking to Mary.

Sometimes the philosophising is a little on the nose – such as Mary treating a patient with amnesia – but the three leads are charismatic enough to compensate, especially Laura Rogers as Mary. The stand-out performance, though, comes from Lizzy McInnerny as Vi, who steps out from the monstrous shadow of her memory to reveal a frightened and vulnerable woman.

Even more telling of the play’s provenance than the decor are the women’s relationships to men. Each one is beholden to a partner – or imagined partner – just as their mother was beholden to the laconic family patriarch. These relationships, at best uninspiring, at worst abusive, are largely just accepted; even Mary’s partner, whose bumbling manner belies a savagely manipulative streak, is given something close to a free pass.

Stephenson spins a lot of plates in The Memory of Water, and commendably few of them end up breaking. It feels far nimbler than its two and a half hour run time suggests, and there’s genuine warmth in the messy sibling relationship. While there are no big revelations left in this play, it’s a pleasure to simply spend some time in the company of these women. Nostalgia, as they say, is one hell of a drug – and certainly more effective than homeopathy.