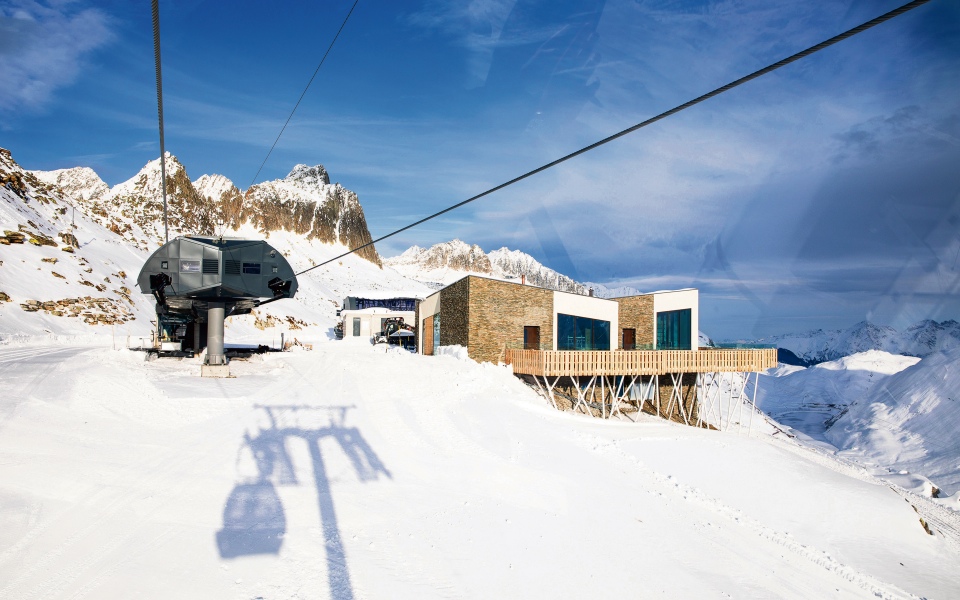 Tap your ski pass, perch on our comfortable chairlift and let City A.M. take you for a tour of the Alps’ best new (or newish) hotels.

We’ve had the enviable task of spending the early part of this winter season reviewing the peaks of high-end hospitality and the black runs of flashy facilities; a blizzard of Michelin-starred mountain food and flickering in-room fires, in pursuit of the five finest places to rest your weary limbs.

There’s something rather Bondian about this place. Andermatt appeared in Goldfinger as a fuel-stop for 007’s DB5, but it’s really only in the last five years that it’s gone A-list and that’s thanks to the arrival of the zen-like Chedi. East meets Alps in this sprawling yet enigmatic 123-bedroom lair designed by the acclaimed Jean-Michel Gathy. Under The Chedi’s signature low-lighting, one imagines a tuxedoed Daniel Craig stalking his prey around modernist fireplaces.

Also Read:
The best luxury resorts in the Alps – where to stay and where to ski

Foodies will rejoice. Behold the room of cheese, featuring a five metre tall tower of local produce. Above the hotel, at the top of the Gütsch cable car, the hotel has a high-altitude outpost of its one-star Japanese restaurant. Lunchers swap their ski boots for slippers to come inside. At 2,300m, you’d probably need to be in an ANA Dreamliner to eat sushi at greater altitude. We opted for the bento; a 120 Euro tasting menu in a box featuring sea scallop sashimi with caviar and nikujaga-braised wagyu short ribs. It makes a change from tartiflette. We hit the slopes straight after, free of fromage lethargy. Fondue was on the menu that night, though, at The Chedi’s pop-up rustic chalet, which sits on the hotel’s own ice rink. To gussy up the saucepan of bubbling Gruyère, a generous quantity of shaved winter truffle is added.

The bar boasts 100 different sakes, and the smoking library runs to 380 types of cigar, some of them extremely rare. Post-après-ski salvation is found in the two-level spa with a range of hydrotherapeutic baths, including one at 42° and another ice-cold, while the main indoor pool is the longest in Switzerland.

Rooms from £740 per night – thechediandermatt.com

Lech enjoys royal patronage. The Dutch royal family have a place here, the King and Queen of Jordan are regulars, as was Princess Diana. This is where the blue-bloods ski and its discrete character is surely the attraction. They’ll appreciate Severin*s, which is too grand to settle for a simple apostrophe.  Set among private homes, Severin*s blends into anonymity on the outside, its 150-year-old woodwork reclaimed from local farmhouses. Inside, though, there’s an artful blend of rustic cosiness and contemporary cool. It’s also exclusive, with just nine suites in the main bit and four in the ‘residence’ next door, interlinked by a subterranean tunnel and boasting a private hot tub and cinema. Both buildings and the small team of charming staff give the feeling that you’re in a private chalet, not a hotel. Head chef Kevin Szalai cooks up Tyrolean cuisine but is sharing his kitchen with Tom Aitkins this month. There’s a 3,000 bottle wine cellar too, which works out generously per head, and where dinners can be held, perfectly paired with sumptuous regional wines.

Also Read:
The best luxury resorts in the Alps – where to stay and where to ski

Our suite features a balcony, Minotti furniture and a glass-encased fireplace with enough logs piled up to roast a wicker man. In the basement, wood gives way to granite as if you’ve stepped inside the mountain itself. The pool is postcard-worthy, with underwater bubble loungers and a waterfall, and there’s an infrared sauna. It’s a half-mile journey to the town. If you’re walking, ask the staff to point out the cute alpine letterboxes en route in which you’ll find little bottles of schnapps regularly topped up to keep visitors warm.

Rooms from £600 per night – severins-lech.at

If Lech is where the quiet money goes, Courchevel 1850 is where it’s loud. The Barrière Les Neiges is the latest arrival to the exclusively five-star hotel scene here and brings with it several USPs, not least ‘Palace’ distinction and an alpine outpost of the famed Fouquet’s. The Parisian brasserie, on the corner of the Champs-Élysées and Avenue George V, is particularly noted for its movie star clientele (and extortionate prices), as well as its red velvet chairs and gold furnishings. You’ll find all of that here too (the actors in the form of Studio Harcourt prints adorning the walls). The screen theme continues with a private cinema and amazing kids club, ‘Petit VIP’, where junior Spielbergs can learn filmmaking (and have pool parties, fashion shoots and mocktails at the bar).

It’s also got the biggest ski room in the resort, with valets taking your boots on and off for you. Fendi has designed a range of winter wear for guests, and with five days’ notice they’ll have custom skis made for you by Kästle and sent from Austria.

The beauty of this place is it’s properly ski-in ski-out, set on the green piste Bellecôte, so the process from breakfast buffet to gondola lift couldn’t be easier.

A top-notch spa will help restore your ski legs, while Pierre Gagnaire’s Fouquet’s menu is decadent. We pitstop for lunch and take the truffle croque monsieur (40 Euros). There’s a second restaurant, BFire, where Argentinian holder of three-stars Mauro Colagreco charcoal-grills us a 1.2kg côte de boeuf (180 Euros and worth every penny).

Most of Barrière’s clientele are French and Russian. There are 42 larch-clad rooms, all of which are palatial and none more so than the penthouse, which is over £14,000-per-night with a seven-night minimum in high season. For that, you get 310 square metres set over two floors and, of course, a private butler.

Rooms from £1,200 per night – hotelsbarriere.com

Megève enjoys some of the best skiing in the alps, and Alpaga is its most stylish auberge. Two buildings, clad in centuries-old timber, house 22 bedrooms while a further five sizeable chalets are available for full-booking. Dotted around this tiny and convivial hamlet away from the town centre are such eye-catching features as a fire pit, around which are placed fur-covered loungers and ice buckets full of fizz. There’s a small barrel-shaped hot-tub that looks out to Mont Blanc (Alpaga is the only hotel in Megève with a view of the mountain) and a cylinder-shaped sauna which is fired up as soon as the pistes shut.

Gastronomy is a treat at this hotel. The two-starred La Table de l’Alpaga is the work of Anthony Bisquerra, who served us a tasting menu of foraged mushrooms with egg yolk, crunchy buckwheat and lovage, succulent arctic char in a beer and poultry jus, and perfectly pink veal with salsify, all washed down with tremendous Savoyarde wines.

The limed oak bedrooms aren’t huge but there’s a great use of space, gorgeous fabrics and balconies affording views of the Val d’Arly. Our room didn’t have a fire, but it did have a fire DVD on loop so we just hung our wet ski socks on top of the telly.

This boutique hotel may look decidedly ordinary from the outside – a large and unadorned chalet on the roadside at the edge of town – but inside it’s big on luxury and not on understatement. It’s as though a modern mega-yacht designer went to work on an 18th century galleon.

Inside it’s big on luxury and not on understatement. It’s as though a modern mega-yacht designer went to work on an 18th century galleon.

The lobby’s centrepiece is a glass grand piano decorated by Alec Monopoly (one of two in the world; the other is owned by Alicia Keys). The bar and restaurant will feel homely to the Moscow and Monte Carlo set. Our £1,000-a-night suite is cosier, with wood-panelling and reindeer skins on emperor-sized beds, sultry lighting, a ‘faux’ fire (it uses steam and lights), and a terrace long enough for championship bowling. The hotel’s most arresting sight is its swimming pool which looks like a nightclub, with water oscillating between emerald and navy and big chrome spheres on top reflecting the Saharan black marble and abundant orchids. Somewhat alarming to the untrained eye, though perhaps not to the Gstaad demographic, its spa has an en-suite plastic surgery clinic.

While not ski-in ski-out, this hotel is the closest to the cable cars and they’ll chauffeur you and your kit there in a stretched Maybach.

Rooms from £700 per night – ultimagstaad.com

All rates are based on the current winter season. SWISS flies 50 times a week from London to Geneva from £89 return, and 83 times a week to Zurich from £75. swiss.com Return flights from Gatwick to Innsbruck are available with EasyJet from £39.91 per person. easyjet.com