The FTSE 100 company said it was entering the year with a "record order book" that has enjoyed a rise in value of 12 per cent to £1.3bn, thanks in large part to private reservations. The order book represents 6,601 homes.

Last week, housebuilders took a beating after figures from Halifax showed house price growth of just 0.3 per cent in December. In November, mortgage approvals fell to a 17-month low of 56,029, according to the Bank of England.

Taylor Wimpey was among the biggest fallers on Friday after Jefferies lowered its rating from "buy" to "hold".

The housing market this year could prove to be a far more tempered than the soaring prices and speculation of bubbles that elicited so much comment in 2014. 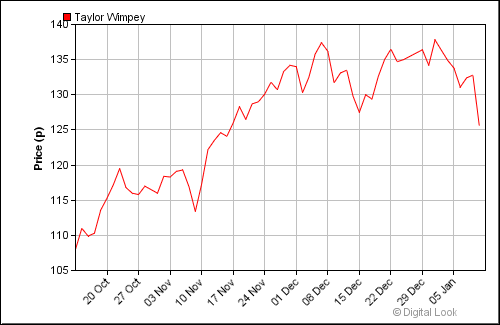 Taylor Wimpey was extremely enthusiastic about the government's reform of stamp duty that featured as a key part of George Osborne's last Autumn Statement:

We welcome the government's Autumn Statement announcement of a reform of Stamp Duty Land Tax payments to a more progressive system, which we believe will help more homebuyers to get onto and move up the property ladder.

While recognising risks to the housing sector, overall Taylor Wimpey is still upbeat on the prospects for 2015:

While the macro economic outlook is uncertain, with a reduced risk of UK interest rate increases in the near term and sensible mortgage regulation, we believe that the market and political risk for our sector is balanced as we enter 2015, and the outlook remains positive.

Taylor Wimpey said the slowdown in house price growth would make a more "healthy and more sustainable" housing market. However, investors may not see it that way as evidenced by last week's fall in the share prices of major housebuilders. The past week could be viewed as the first indicator of the year that the housing market boom is coming to an end.