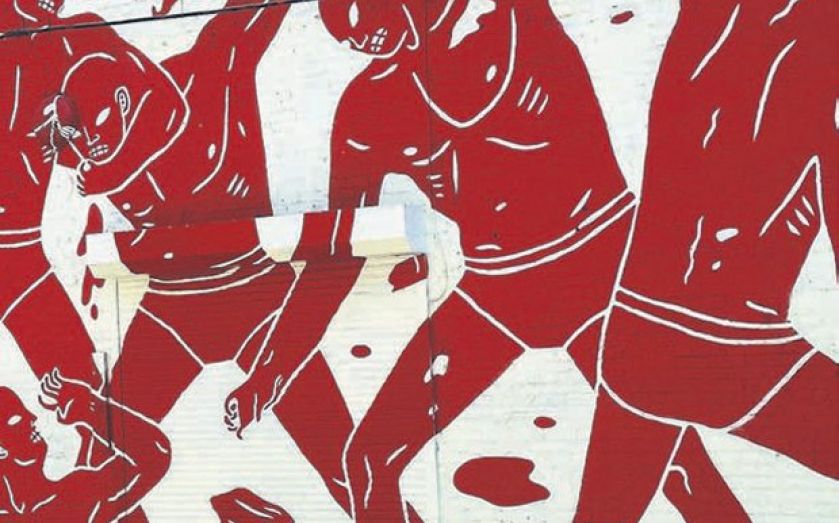 A STRANGE phenomenon in London’s art calendar occurs every year around mid-October when the art-loving masses descend on Regent’s Park to wander around a set of prefab “gallery” spaces in a bleak marquee.

Yes, I’m talking about the Frieze Art Fair. The uniform white of these showy and competitive commercial stalls have long inspired “off site” counter shows, and renowned street art gallery Lazarides has made this tradition its own with Brutal, its sixth parallel show. Founder Steve Lazarides says his new show is staged “in a beautiful building for brutal times.”

Rather than using the streets, as you might expect from a street art curator, Lazarides has gone underground – from a polished façade on the Strand, to a cavernous bunker. The show launches in a new venue – the Vinyl Factory’s 180 The Strand – which aspires to be a new hub of creativity for artistic industries and Brutal exploits the atmospheric potentials of this semi-derelict location well.

In the main space, Cleon Peterson’s anarchic monochrome murals of rioting half-naked men strangely evoke another frieze (the one in the Parthenon). Intriguing photographs of LA Gangs by Estevan Oriol are a worthwhile inclusion but they also expose the faults of the space. Paintings and photographs tend to look a bit awkward due to its sheer size. It does, however, do great justice to film. Doug Foster’s gargantuan, hypnotic installation is worth seeing on its own.

At times, the show is vacuously sensational. Still, a welcome antidote to Frieze.