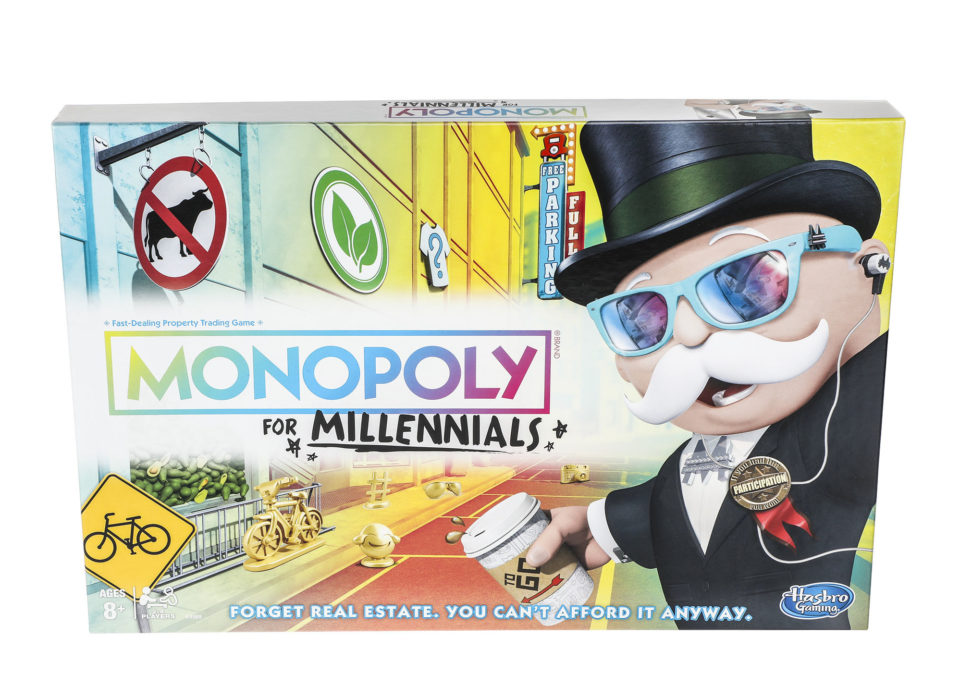 Millennials are one of the most maligned of any of the generational cohorts. When not branded as “snowflakes” or accused of indulging in too much self-care, they are routinely blamed for all manner of problems such as the death of the high street or falling interest in the package holiday.

Of course brands – many of whom aren’t shy of leaping on the odd bandwagon or two – have jumped on the millennial trend with varying degrees of success. For example, the rise in popularity of veganism has been attributed to this demographic, and companies like Virgin Trains and Waitrose supermarkets have been quick to expand their ranges to cater for the new vegan cohort.

Some attempts to reach this group have ended up a bit shy of the mark, though. Hasbro’s Monopoly brand, usually so good at capturing the zeitgeist (Monopoly: Fortnite and Monopoly: Despicable Me being just two products riding the coattails of fads), has struck a sour note with Monopoly for Millennials.

Instead of money, players earn points, and instead of real estate (because “forget real estate, you can’t afford it anyway”), you can have experiences. It attempts to be knowing, but instead just comes across as snide. It’s not a game one millennial buys for another, it’s a game a bachelor uncle would buy as a tongue-in-cheek joke for their 20-something nephew.

The fact is, brands need to stop making millennials the punchline. Not only is it the laziest of generalisations, but marketers are also alienating a fundamental group that holds the key to brand longevity. Not only are they and Generation Z (those born since 1995) going to be living and consuming products for a long time to come, they have ideas on how brands can stay relevant.

Listening to millennials isn’t about creating a “range” – it’s about fundamentally changing behaviours. More than eight in ten (84 per cent) of millennials believe it is their duty to change the world, and for many that involves less “stuff” and more being in the moment. More than three-quarters of millennials would rather spend their money on concerts, festivals, and dining out than on things to own. It’s about making connections, not collections.

This certainly doesn’t mean millennials are anti-brands. They are happy – even eager – to engage with brands that share their values. Brands that win with this demographic are ones that speak to them authentically (90 per cent of millennials and Generation Z consumers cite authenticity as key), and personally and actively help them make those connections.

Relationships are at the heart of the millennial “experience economy”. Very few experiences are fully enjoyed alone. Building new relationships – platonic and romantic – are of prime importance to this group. Millennials are also settling down later in life than other demographics traditionally did, thus spending more time single and exploring their options.

It should therefore come as no surprise that dating apps play a huge role in expanding millennials’ social circle, and as such are the ideal platform to reach this key demographic. Brands have recognised the “single and sociable” group already, but aren’t necessarily speaking to them as directly as they could be.

Expedia, for example, found that 25 per cent of holidaymakers planned a solo trip in 2018. Combine this with the knowledge that 40 per cent of millennials are likely to book a holiday using their smartphone, and it makes sense to tap into the potential reach that dating apps provide. After all, travel apps serve a purpose, but dating apps serve a lifestyle.

It’s not just about smartphone convenience, it’s about mindset. Dating apps reach millennials when they are fully in a spirit of discovery – ready to meet new people, experience new places and things. Their remit has extended far beyond swiping right for romantic prospects. Millennials access the platforms for everything from restaurant recommendations to cultural information and reaching out to new friends.

But once more, it’s down to more than just advertising. Brands need to deliver value to their audience. Delta, for example, provided Tinder users with backdrops that helped them look like international travellers on their profile. A bit of fun, but with a connection for both brand and user.

Targeting single millennials isn’t about the depressing single room supplement or Delia Smith “One is Fun” cookbook for Christmas every year. It’s about targeting a growing segment out to cram as much into life as possible and who have spending power that packs a punch.

Millennials – and especially single millennials – are ready to mingle and respond strongly to brands that can help them do it with panache. Dating apps are the springboard to romance but also so much more. It’s time marketers made the first of many moves.