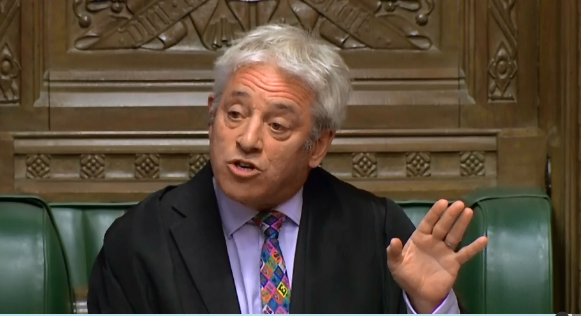 Bercow denied the government a second vote on Prime Minister Boris Johnson’s withdrawal agreement after Johnson first put it to parliament in a special sitting on Saturday.

MPs chose to withhold their approval of the deal and instead back Sir Oliver Letwin’s amendment that delays the vote unless and until all Brexit legislation is passed.

Bercow pointed out that Johnson’s motion today was “in substance the same” as that considered by parliament on Saturday.

He dismissed as “not persuasive” arguments that the situation has changed now Johnson has sent a Brexit delay letter to the EU.

Holding a second vote on the deal today would prove “repetitive and disorderly”, Bercow said.

“I have simply sought to discharge my obligations and to do what I believe to be right, and that is what the speaker has to do.”

Bercow continued to defend himself from MPs, saying he has invoked the rules he relied upon today to prevent “conflicting” rulings on similar issues where one decision follows shortly after another.

“What could be shorter order than the next sitting day after the last judgement was made?” Bercow said. “And that was the rationale for the perfectly reasonable judgement that I have made.”

Brexiteer Bernard Jenkin said the motion the government would have put forward today was different to Saturday’s.

Jenkin added that his Public Administration Committee will now hold a hearing on the Speaker’s role.

“When he was getting decisions in his favour he was grumbling,” Bercow retorted. “He is grumbling now because he is getting the judgements that he doesn’t like.”

Bercow was widely expected to block today’s request for a meaningful vote on Johnson’s deal.

Saturday’s vote for the Letwin amendment triuggered the Benn Act, which compelled the Prime Minister to write to the EU asking for a delay to Brexit.

Johnson did not sign the letter, instead following up with a note arguing that an extension was not in the UK’s interests.

This is a breaking news story. More to follow.