Simon Miller heads to Les Menuires in Savoie, and finds there’s nothing sedate about skiing with the kids 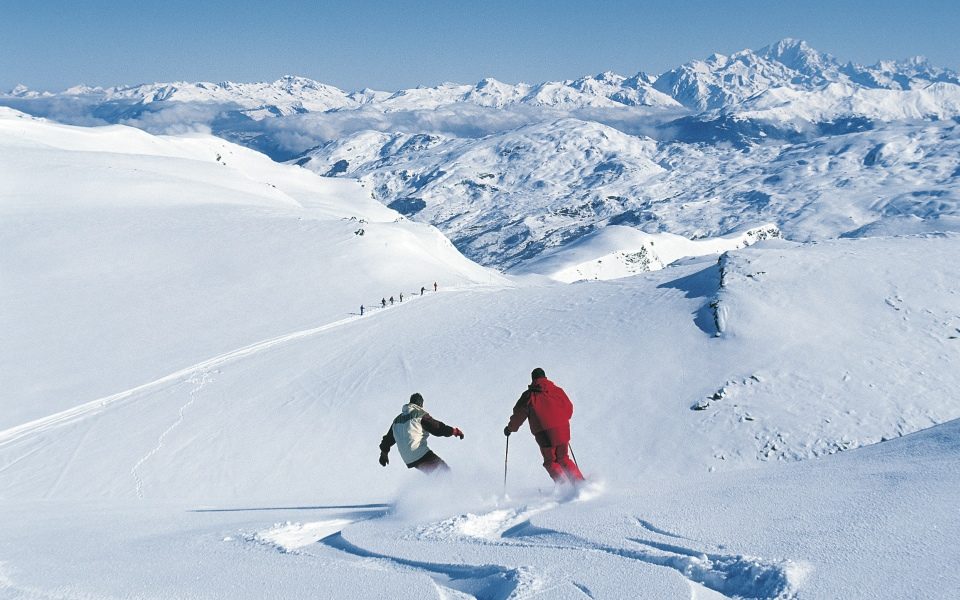 Reberty is an upmarket suburb of Les Menuires. Its timber buildings are in stark contrast to the now protected, brutalist architecture of the surrounding areas, and its these classic alpine touches that lend a touch of class to this corner of the mountains.

Contributing to this touch of class are the chalets run by Powder n Shine. Last season they had four, with plans to expand with a new and even higher spec chalet.

We stayed in Sapin de Reberty, and as we drove up the gravel driveway – well, gritted road – we were greeted by our uniformed cook, concierge, chalet maid and assistant. This was as close to being Hugh Bonneville as I was likely to ever get. Cake in the drawing room, anyone?

Finding skilled staff in the mountains is tough, especially staff who are able to resist the temptations of a deep powder day while maintaining high standards throughout the season, but Powder n Shine seems to have this particular personnel challenge sorted.

Chef Ali trained in Michelin-starred kitchens in the UK before deciding to spend a season running the catering for Powder n Shine. The food was always outstanding, imaginative and entertaining. Duck, guinea fowl, beef, lamb, sea bass all exquisitely prepared with coulis, jus and foams.

For entertainment we had “cake guessing” and a “make your own mess” dessert with meringue, cream and fruit served with a mallet. Chaos and delight in equal measure. And no one managed to name all of the apple formats in Ali’s ten apple dessert. If you’d like to cheat: they’re puree, gel, crumb, pearl, poached, julienne, sorbet, toffee, foam and crisp.

The cheeseboard was filled with the usual alpine specials. Perhaps next year this will include world cheese of the year from Lynher Dairies, Cornish Kern. With its Comte and Gruyere flavours, it may cause some consternation amongst French fromage-istas.

Apart from the creature comforts this chalet holiday was extremely convenient. You can drive in, drive out from Grenoble in under two hours. And with its privileged position right on the piste, only an igloo could be more be more ski in, ski out. Rarely have I had to lug so few of my offspring’s skis around.

The chalets are situated right on the pistes, which means less time spent lugging gear around (Source: Cécile Bouchayer)

The Three Valleys is massive (over 600kms of piste plus an entire fourth valley they don’t mention in the name). The challenge of skiing from one end to the other is a test of anyone’s skiing machismo. We were no different, but when outrageously high winds (upwards of 50mph) started closing links, we stuck to Les Menuires and Val Thorens for much of our stay. This area alone would rank as a sizeable resort, so there was no shortage of skiing.

Still, the wind was no idle threat as my seven-year-old found when she was buffeted sideways across an exposed piste. It was time for the lighter members of the family to head to the shelter of the lower slopes, but I managed to squeeze in a few extra hours as the skies continued to whistle and the wind whipped up a proper maelstrom of snow and driving ice. It was great fun when tucked into decent kit, with a promise of hot tea and cake at the bottom of the run.

Soon the mountains shook off their foul tempers, and the attraction of skiing the Three Valleys with a family became evident. There is no shortage of suitable runs. Our favourite was St. Martin’s Jerusalem, a newly landscaped rolling red with jumps and ample side-pisting for the daring, inch-high leaps that my kids enjoyed. Of course, I’m still unshaken in my belief that my own aerial efforts at that age resulted in massive air.

We were greeted by our uniformed cook, concierge, chalet maid and assistant. This was as close to being Hugh Bonneville as I was likely to ever get. Cake in the drawing room, anyone?

Having lauded the Powder n Shine chalet, I would also recommend a trip to a brand new refuge, Le Trait d’ Union. A suitably rustic sign just below the St. Martin Express chair will lead you along a narrow path away from the piste. Just as you begin to suspect you’re on a wild goose chase, you’ll find yourself in front of a luxurious alpine hideaway.

My recommendation is to book in for a late lunch and don’t leave. Instead check in to the beautifully decorated rooms. The menu is simple but great – the Savoyard pasta and sausage may not have had the refinement of Ali’s cuisine the night before, but for sheer flavour it was divine.

Les Menuires has the largest ESF ski school in France, and there were plenty of ankle biters to process the week we were there. I take a fairly Victorian line when it comes to ski holidays. We are here to ski as a family, and trivial distractions such as sledging and mini roller coasters are for charlatans. But my children beg to differ, and I have to admit that my curmudgeonliness was breached by both Snow Mountain (a mini roller coaster) and Roc n Bob (a specially prepared 4km sledging run).

The shrieks of delight were ear splitting, and suggested that I may need to update my Victorian sensibilities. And it was only fair to give them a break, considering that my youngest had only just recovered from being blown sideways by the winds.

With a resort this large there are, of course, fantastic off-piste options as well. I’ll have to come back another time to take a wee hike up to the Pointe de Thorens, or perhaps the backside of La Masse. All in the name of burning off a few of the calories Ali has plied me with.