Deliveroo became a staple of the quick service food delivery industry after the company began operating in the UK in 2013, swiftly became a household name. According to YouGov Profiles data, 84% of Britons are aware of the brand and 10 per cent have ordered from the app in the past three months.

Since the start of the pandemic, food delivery apps have seen mixed performance. The first lockdown highlighted a reliance on restaurant chains which were forced closed and home cooking enjoyed a surge in popularity.

Orders from offices also ceased as Britons were told to work from home wherever possible, taking away key customers for brands whose customer base was heavily made up of office workers.

However, as the pandemic progressed demand for takeaway dinners and grocery deliveries soared. So much so that Deliveroo recently unveiled plans to debut on the London stock market this year after reports of a 54 per cent growth in net sales despite losses of £224 million in 2020.

On the anniversary of the first national lockdown, YouGov BrandIndex data takes a look back at how appetite for Deliveroo fluctuated over the year. Consideration scores, which ask consumers whether they would consider purchasing from a brand or not, grew from 8.8 at the start of lockdown to 11.8 by 12 April as consumers hoped to carry on eating their favourite foods. Similarly purchase intent scores (whether a brand is someone’s first choice to purchase from) increased from 2.6 to 5.1 by 28 April. 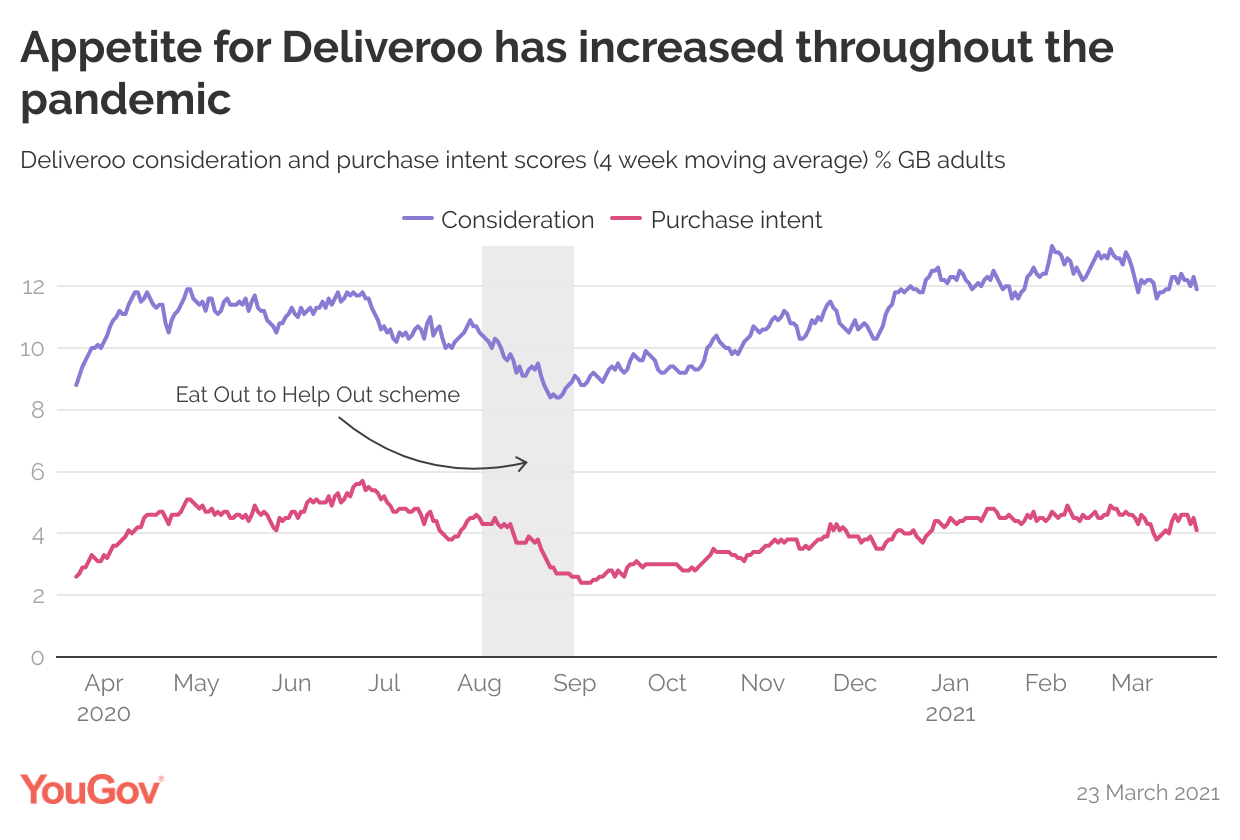 At the end of May, consideration and purchase intent scores saw an uptick as key restaurant brands Wagamama and Nandos reopened for delivery and consumers flocked to get a taste of their favourite restaurants they’d been deprived of. Scores declined over the summer months as restaurants reopened and the Eat Out to Help Out scheme was introduced, but then began an upwards trend throughout the introduction of the tier system and subsequent lockdowns.

Deliveroo’s impression scores (a net measure of whether someone has a positive or negative impression of a brand) peaked in early May at 8.1, after pledging to deliver free meals to NHS workers and allow app users to round up their bills to donate to the NHS, and in late February 2021 after announcing IPO plans (6.6).

While the beginning of the pandemic was a difficult time for all businesses, food delivery apps like Deliveroo have since benefitted from increased enthusiasm for takeaways. Whether this appetite for eating in will remain once restrictions are lifted remains to be seen.