Tesco and Tesco Mobile earned positive headlines in recent weeks following the announcement that they were swapping out apples for Apple iPhones, Galaxy chocolate for Samsung Galaxy phones, and substituting other grocery items with high-end technology. The supermarket’s recent media campaigns have also encouraged Britons to stop buying alcohol from their stores in favour of returning to recently reopened pubs.

Data from YouGov BrandIndex UK shows that Tesco’s two-pronged PR efforts have paid off. Among Britons, Buzz scores – which measure whether consumers have heard anything positive or negative about a brand in the past two weeks – more than doubled, rising from 7.2 to 16.2 (+9) between April 7 and April 15.

Over the same period, Ad Awareness, which tracks whether consumers have seen or heard an advertisement for a brand over the past fortnight, increased from 27.9 to 36.5 (+8.6). 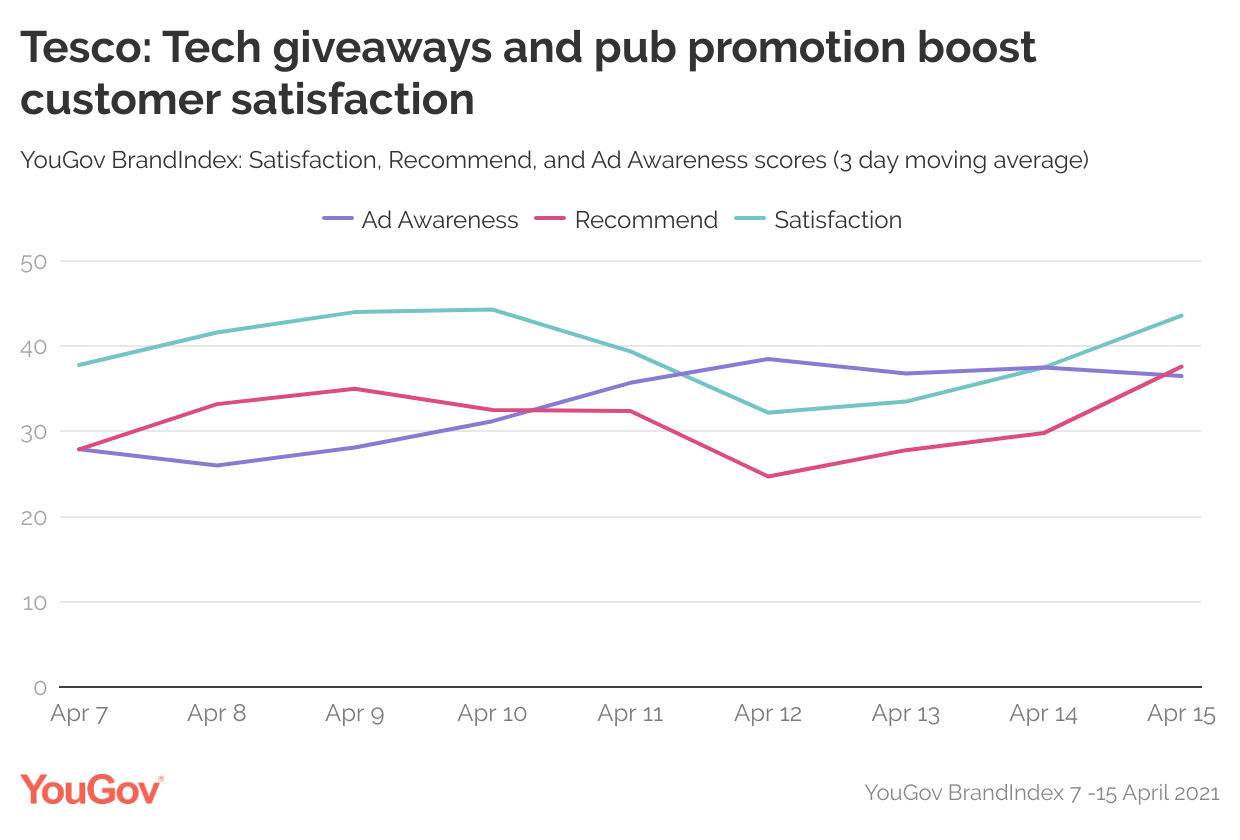 The parallel campaigns also boosted Recommend scores by 9.7 points (27.9 – 37.6) during this period, with a particularly sharp rise following the brand’s attempt to encourage British consumers to return to pubs (April 12). Satisfaction scores changed from 37.8 to 43.6: increasing after the tech giveaway campaign was revealed, dipping, and rising again following Tesco’s pub advocacy efforts.

The pub campaign may have helped Tesco maintain momentum throughout the month in tandem with the handset giveaways. Between April 12 and April 15, Word of Mouth scores, which measure whether consumers have spoken about a brand with a friend or family member, went from 14.2 to 22.5 (+6.3). At the same time, Reputation scores (which measure whether a consumer would be proud to work for a company or not) improving from 10.9 to 18.3 (+7.4).

Tesco Mobile’s Reputation has also benefited from this campaign, with the mobile operator’s scores rising from 2.3 to 7.6 within a week (+5.3 between 7 – 14 April).

Tesco’s marketing for April 2021 focused on two very different campaigns: one comprised of old-fashioned giveaways, and another topical advertising effort that unconventionally encouraged consumers to stay away from its stores. The twin-track approach has helped both Tesco and Tesco Mobile gain traction with the public over the month so far.