In May 2021 – with restrictions eased, vaccinations opening up to a larger number of Britons, and ‘finger-lickin’’ presenting less of a public health risk – the brand brought it back in a new TV ad.

Since launching the campaign on May 10, KFC’s Ad Awareness scores (which measure whether people have seen an ad for a brand in the past two weeks) rose from 19.8 to 25.5 (June 10 – 1 week moving average). But it has had an impact beyond just getting in front of viewers’ eyeballs.

Read more: Shakespeare on advertising: BT hit the back of the net with Hope United campaign

Perhaps that’s because the ad didn’t just revive an old tagline. Using a combination of original and user-generated content, it highlighted customers who have celebrated major life events at KFC, proposed to their significant others, called the police over chicken shortages, and even adorned themselves with (perhaps ill-advised) tattoos of Colonel Sanders. 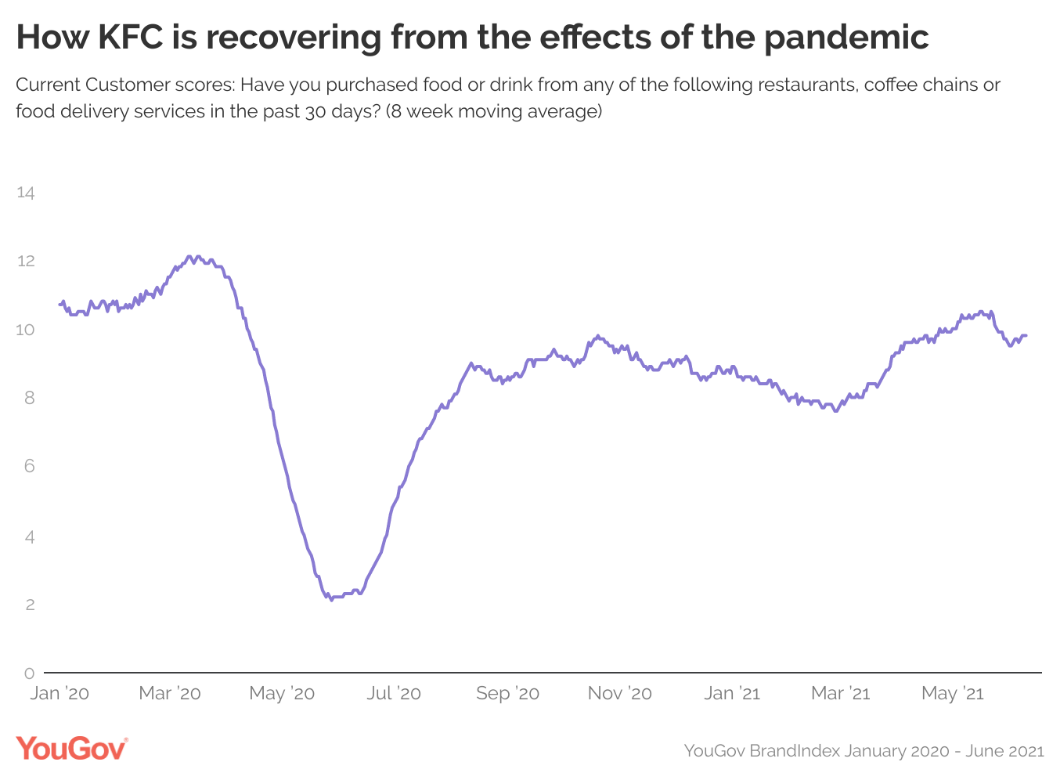 It has been a recipe for success so far. Impression scores for the brand, which track positive or negative sentiment towards a specific company, doubled from 4.5 to a peak of 10.1 (June 8), before falling back slightly to 5.7 (June 10). Value for Money scores saw a similar bump, rising from 5.7 to 9.0 in the month since it launched (May 10 – June 10). There was even a temporary bump to Consideration scores, which rose from 20.1 to a peak of 25.8 between May 10 and June 4 – again seeing a decline to 21.5 by June 10.

The public have appreciated KFC’s efforts to remind them of pre-pandemic life – and KFC naturally have good reason to get back to life as it was before lockdown as quickly as possible.

While Current Customer scores, which track whether consumers have bought food or drink from a brand in the past 30 days, have gradually recovered since the pandemic, they have not quite returned to where they were before the first lockdown. Sitting at 12.0 on March 23, 2020, a year later they had only climbed back to 8.5. It may take a little longer for the association between COVID-19 and finger-licking to disappear from the public consciousness, but things are nevertheless improving for KFC.