The right trousers: Tom Cridland on Leonardo DiCaprio, swine flu and the importance of startup loans in the developing world 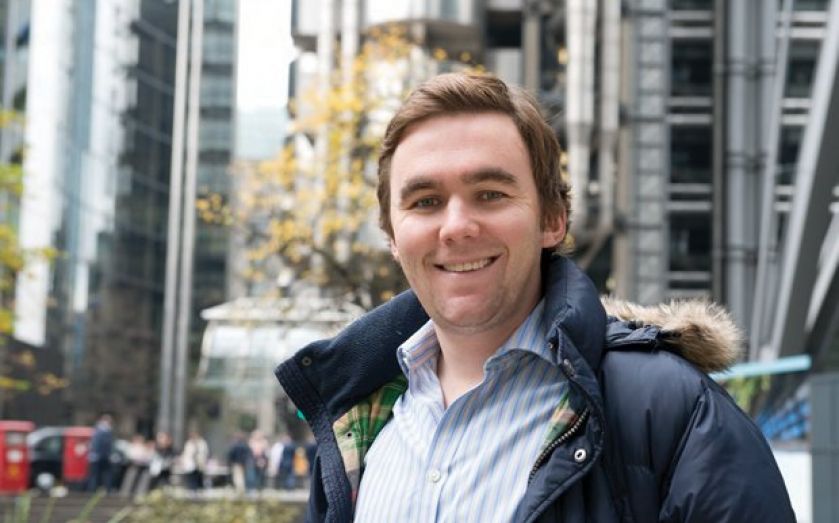 Working alone isn’t an issue for Tom Cridland, founder of the eponymous fashion label. “It doesn’t bother me at all. Some people love the office vibe, but I’d just get distracted. Just me and my laptop is fine.” The 25 year-old opened Tom Cridland in January 2014. Starting with just a £6,000 government startup loan (and he hasn’t taken any further investment as yet), he now feels like he’s “starting to make progress in actually building a brand”. His trousers have been worn by Leonardo DiCaprio, Stephen Fry, Hugh Grant, Daniel Craig and Rod Stewart to name but a few. Cridland decided a year in that he wanted to branch out from trousers, and started working on t-shirts. “I want to be known for trousers, but I can do other stuff provided its meticulously designed and made.”
As a one-man band, Cridland has relied on part-time distribution employees and friends to get him this far – but it’s not even his first business. At university, he founded a phone charging company, travelling to festivals and hooking people up. But barriers to entry made it hard for the business to go anywhere. And before that, aged 18, he and a friend had stumbled on another business opportunity – in the form of the swine flu outbreak. They sold 300 t-shirts at their school, emblazoned with “Swine 09”, pocketing £10 apiece. “It was instant gratification – because the notes just piled up. It made me realise that designing clothing is more about your ideas – you don’t need to go to St Martin’s, provided you’ve got an eye for detail and a creative mind.” But it also made him realise something else – “it didn’t feel at all right pocketing that money, so we donated it all to charity. It might have taken off, but that didn’t mean we should’ve profited from it.”

This gives you a flavour of how Cridland operates now. His 30-Year Sweatshirt campaign raised 25 per cent of its £3,000 target in 10 days on crowd-funding platform Indiegogo, where it’s currently live. The sweater is the younger sister to the 30-Year T-Shirt, which was 659 per cent funded in August (you get an item in return for donating). “I know it sounds like a gimmick, but that really only goes as far as the name.” Cridland has partnered with Deki, a charity which provides startup loans to entrepreneurs in developing countries. Ten per cent of every sweater sold in the UK will go to the charity. “To me, being ethical is a win-win. It isn’t something the mainstream currently care about, no, but that’s not to say sentiment won’t change.”
And Cridland intends to impact the fashion world in several ways. Another reason for creating the 30-Year items is to counter planned obsolescence. People probably twig that some items – your phone, for instance – are designed to wear out, “but no-one knows that clothes are designed to fall apart. People are very forgiving of the clothing industry, and I think perhaps there’s too much trust in high street retailers, but you aren’t being sold products designed to last for as long as possible.” This approach makes little sense to Cridland. Half Portuguese, all his items are made by artisans in rural Portugal, using high-quality organic cotton. “Lots of companies say ‘Made in Britain’, but they get away with doing just one stage here. I’d prefer to have something made carefully and entirely in one place.” Cridland asked manufacturers how long a t-shirt could really last for – if it was well made, designed to last. “The number they came back with was 34 years – hence the 30-Year T-shirt and Sweater. Hopefully it’ll make people more aware.”

Cridland packs his clothing in Cambridgeshire, in a warehouse owned by his dad. Jonathan Cridland is chief executive of Lumie – the company that makes light therapy products like body-clocks. But you’d be mistaken if you thought that Cridland the younger was someone who had been given a few familial legs up – far from it. “The only thing my dad has given me is some space in his warehouse – and I employ the part-time staff who work there. That’s his little bit of help. It’s a huge risk, starting a business, but I’d never want him to fund me. Far better to have nearly gone broke and pick myself up. The trouble with bailing people out is that they think they’ve got a cushion the next time it happens. It’s vital that I do the best I can on my own.”
In January, Cridland will be opening up shop in a permanent pop-up space on The King’s Road. “I couldn’t ask for a better location. The lady who owns it has been fantastic. She’s realistic about the fact I’m a startup – it’ll be rent-free but I’ll pay based on commission.” Like many in his position, Cridland had his fingers burnt by an umbrella store where he had a table. “They’re charging young designers extortionate amounts to be there, entice you with marketing promises and then do diddly-squat. I don’t know how they sleep at night. I was lucky to get out when I did.” But with a flagship store on the horizon, and a tour of the US in the pipeline (“people there see bright pink trousers and say, ‘happy pink trousers!’, rather than ‘who’s that public school prat?’”), things are going from strength to strength for Cridland. “I’m confident that, post store and tour, I’ll be able to raise future investment. I’ve lots of new ideas about products – things I’m working on. I’ve barely scratched the surface.”
Tom Cridland is running a 25 per cent discount on its trousers for City A.M. readers for a week with the code CityTC.