Gold-leafed mosque interiors, silk carpets, smooth vodka, ninth century mausoleums and some of the best-looking people on earth — Uzbekistan is a hidden gem. And that’s not just a metaphor; it really is tucked away.

The home of many of the world’s most impressive architectural, scientific and cultural artefacts has the rare distinction of being doubly landlocked (that is, surrounded by nations which are landlocked themselves). Hemmed in by five of central Asia’s ‘stans’ has meant that Uzbekistan’s treasures have not received the full global attention they deserve.

The upshot is that visitors to this former Soviet Republic have its stunning sights all to themselves. This wasn’t always the case. Until the 18th century, Uzbekistan was the centre of the commercial world, thanks to its position on the Silk Road, the famous trading route that stretched from Venice to China. But when new shipping routes made the Silk Road redundant, Uzbekistan lost its strategic importance. The likes of Ghengis Khan and the Persians stopped fighting over it, and the glorious mausoleums, madrassas and mosques lay preserved in relative isolation. But now the country is finally opening up to foreign visitors again. 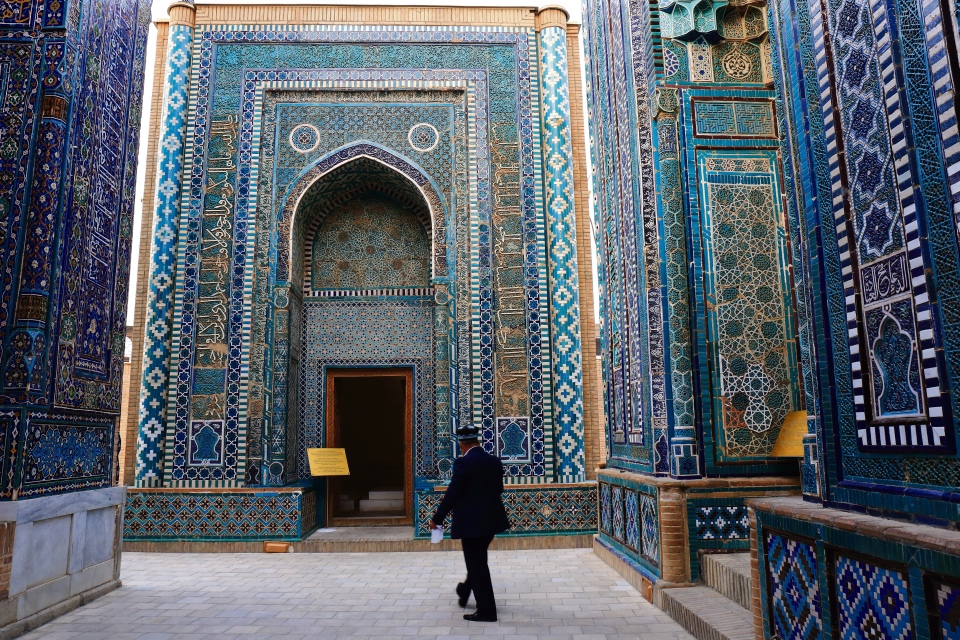 My trip began in the capital Tashkent, Central Asia’s largest city. Much of it was rebuilt following an earthquake in the 1960s. Surveying the Soviet-style architecture from the terrace of the Hyatt Hotel, we sipped local vodka. “Never mix vodka,” the hotel’s Siberian-born sales manager advised us, “drink it straight and you’ll feel better the next day”. She wasn’t wrong: it went down extremely well with some delicious samsa (mutton pastry parcels). In the morning our guide took us on a ride on the city’s metro system, the only one in Central Asia. If you had only five hours to spend in Tashkent, come here. Each of its 30-odd stations were uniquely designed by Uzbekistan’s leading architects and artists in the 1970s. They blended Soviet modernism with classic Islamic styles, using a fascinating mix of marble, glass, colourful reliefs, ceramics and chandeliers.

We drove on northwards towards the Nurata region, through cotton fields, roadside watermelon sellers, mountains and goat herds. Clouds cast shadows on the vast grasslands. En route we climbed a rocky outcrop where petroglyphs carved by Alexander the Great’s soldiers are still clearly visible.

I stopped off at Alisher Navoiy station, named after the 15th century poet. On the walls are paintings depicting scenes from his famous stories, set beneath gorgeous Alhambra-style vaulted ceilings and columns. Kosmonaut station is space-themed: there are oil paintings of the Soyuz space capsule, as well as Yuri Gagarin and Valentina Tereshkova, the first man and woman in space. At Gofur Gulom station it’s all giant spotlights and art nouveau Egyptian-style columns, coloured in malachite. Intriguingly, each station displays how much time has passed since the last train departed – perhaps reflecting Uzbeks’ strong relationship to history.

The next day a modern, high-speed train sped us to the town of Bukhara, three hours west of Tashkent. During its golden age in the ninth and 10th centuries Bukhara hosted some of the Islamic world’s greatest intellectuals, scientists and artisans. Today it is a centre for silk carpet weaving (rugs sell for up to $50,000), and in the old town you will see many older folk with traditional gold teeth and women dressed in brightly embroidered satin dresses. Uzbekistan’s history as a cultural crossroads is reflected in many eyes and faces: a gorgeous mix of Chinese, Mongolian, Persian and Russian. 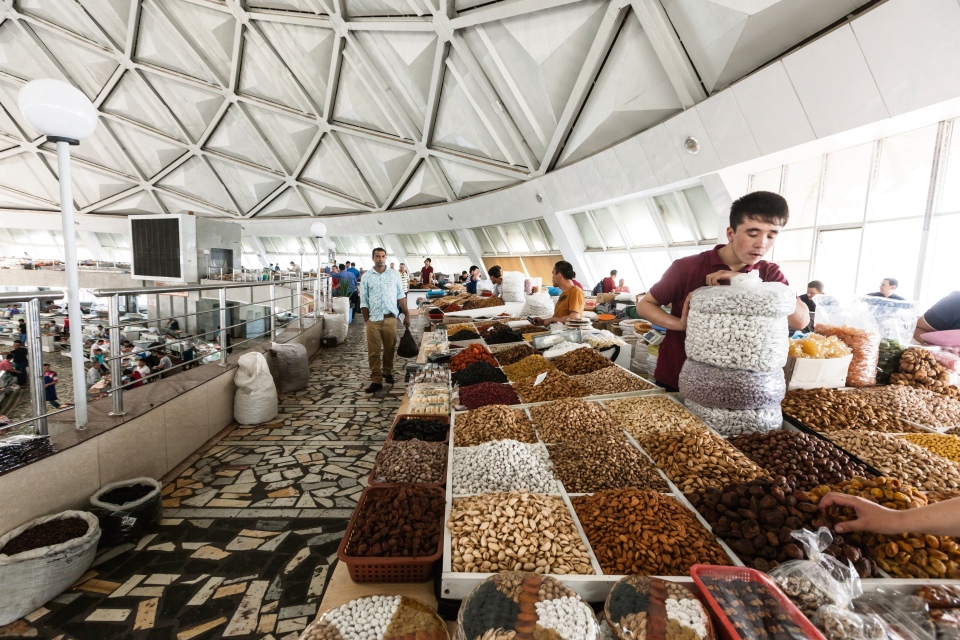 The Chorsu Bazaar in Tashkent

In Bukhara you’re spoilt for choice with ancient sights. The highlight is the beautiful Po-i-Kalyan religious complex with its blue-domed mosque and skyscraping minaret, which was built in 1127. It used to be a staggering 45 metres high, making it the tallest free-standing tower in the medieval world. Genghis Khan was so impressed that he chose not to demolish it. Instead, criminals were executed by being thrown from its summit.

Another highlight is the Samanid Mausoleum, resting place of Persian ruler Ismail Samani. The ninth century construction is a highly regarded example of Persian Central Asian architecture. The angled brickwork gives a unique texture to its exterior.

We drove on northwards towards the Nurata region, through cotton fields, roadside watermelon sellers, mountains and goat herds. Clouds cast shadows on the vast grasslands. En route we climbed a rocky outcrop where petroglyphs carved by Alexander the Great’s soldiers are still clearly visible.

It seemed a marvel, as I gawped at the exquisite gold leaf smothering the interiors from floor to ceiling, that this place wasn’t overrun with visitors.

The Nurata Yurt Camp lies in the desert near Lake Aidar. Here, the landscape has a peaceful New Mexican feel to it, full of undulating sand dunes and scrub in which desert monitor lizards lurk. Guests sleep in traditional yurts beneath thick blankets. And fear not – there are fixed toilets and showers too. After sunset a guitarist sang folk songs around a fire as we gazed at the stars.

The next morning our bus rolled eastwards to Samarkand. We had saved the best until last. This city of myth and legend has been inhabited since sixth century BC. By 1370 it was the centre of the largest empire the world had seen, with links from Delhi to Damascus and a population that grew to be even bigger than it is today. Marco Polo once paid a visit. The architecture here is breathtaking. It includes Shah-i-Zinda, the necropolis of the Living King, and Registan Square, a former public gathering place and Uzbekistan’s undisputed masterpiece. Its three madrassas are covered in blue mosaic tiles and flanked by minarets.

It seemed a marvel, as I gawped at the exquisite gold leaf smothering the interiors from floor to ceiling, that this place wasn’t overrun with visitors. Enjoy it while it lasts.

Rooms at the Hyatt Regency Tashkent start from $370 per night, including breakfast. For more info and to book visit tashkent.regency.hyatt.com