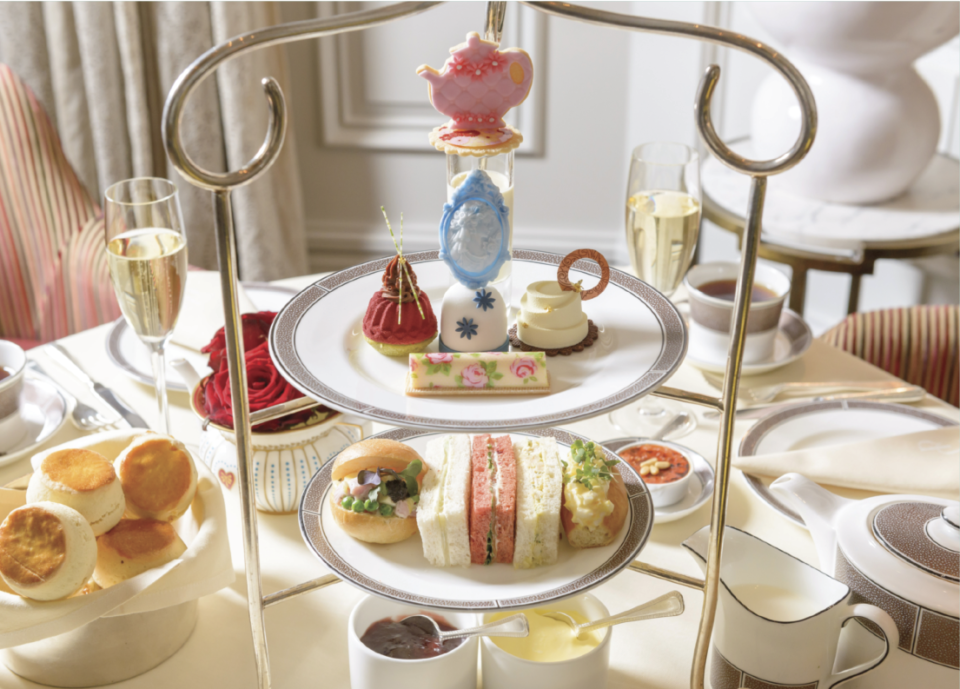 PALM COURT at the LANGHAM

If I could click my fingers and banish one element of our national cuisine, it would be afternoon tea. It’s a dreary throwback to a time when we felt the need to ape our social betters, in this case by eating wildly overpriced cucumber sandwiches. Its emergence is often credited to Anna Maria Russell, the 7th Duchess of Bedford, who some time around 1840 invited her aristocratic peers to drink sugary tea with her at Woburn Abbey. Historians, though, have found various earlier references to the practice. Some attribute it to Lady Rockingham circa 1765, a well-connected woman who worked out that afternoon tea was a better occasion to curry political favour than a formal dinner; others to Charles II’s Portuguese wife Catherine of Braganza, who may or may not have introduced it to the King’s court in 1662. My favourite theory, though, is that it originated in the upper classes of the Netherlands or – even better – France: how delightful to think of all those UKIP voters on day trips to the big city, full of revisionist fervour for how much better things used to be, snacking on afternoon tea that’s as European as frog’s legs or pickled herring.

Afternoon tea’s popularity dwindled towards the end of the 20th century, becoming little more than a way of extracting large sums of money from tourists. Then the diamond jubilee (and the royal wedding, and the royal baby, and the other royal baby) led to a renewed interest in celebrating our least egalitarian institutions. Afternoon tea surfed back into the national psyche on a wave of Keep Calm and Carry On posters, babies called George and other kitsch references to a largely imagined past. Now I get asked to afternoon tea almost as often as I’m asked to breakfast. Rational people are gladly paying £50 for a plate of sandwiches and a glass of fizzy wine, as if we didn’t live in one of the richest and most diverse culinary cities in the world.

Like “New York brunch” and “street food”, afternoon tea has become “a thing”, repeated often and badly across the capital. It wheedles its way onto the menus of not only international hotels but proper restaurants: Sketch does an ironic afternoon tea; Ting at the Shard a Chinese version; Daawat an Indian one.

All of which brings me to the newly refurbished Palm Court at the Langham, which claims to be the source of the problem, serving what may have been the first commercial afternoon tea 150 years ago. Today it has several versions, one of which is called the Wedgewood and costs £49 a head. Was it any good? I have no idea. I ordered from the à la carte menu like any reasonable person should.

Palm Court is the kind of place you’d take your mother for a birthday ending in “0”. It’s got high ceilings and chandeliers and gold flowery decorations and other things that are impressive the first few times you see them but quickly suffer from diminishing returns. It has live jazz. It has the kind of service that’s so polished and effortless, so ludicrously personable, that it feels like a parody of itself, exaggerated to the point of grotesque, as if the management had taken The Grand Budapest Hotel as a starting point and decided to camp it up a bit. You half expect them to give you a sly wink to let you know they’re in on the joke. I’m fully in favour of this: what’s the point of eating at the Langham if there isn’t a bit of theatre?

Two things grab you about the menu: first, it’s remarkably simple, full of things like French onion soup and beer-grilled chicken; second, it’s remarkably cheap – incongruously so, given the ostentatious surroundings – with mains starting at £14 for a vegetable tart and topping out at £24 for the rib-eye steak. That’s cheaper than a pub lunch in Hackney. They’re clearly keeping the fancy stuff for the Rouxs’ neighbouring Landau.

A starter of lobster and avocado salad was fresh and vivid, but baked aubergine with pumpkin, goat’s curd and bulgar salad was uninspiring. It’s nice to see Pojarski on the menu, in this case chicken Pojarski rather than the more common veal. It’s a Russian dish made by mincing meat, blending it with butter, reforming it into a chop (including reinserting the bone) and sautéing it in more butter. Apparently it was invented when Tzar Nicholas I visited an inn and the owner – Mr Pojarski – substituted beef patties for veal, thereby inventing a delicious new dish. Palm Court does it very well, the meat as light and fluffy and buttery as you could hope, the accompanying gherkins adding tang, a tangle of fried potato adding little.

I ordered wagyu bolognese because I recently swooned over Salt & Honey’s version, which I consider to be as perfect a wagyu bolognese as you’ll find on these shores. Palm Court’s version comes stacked up like a floppy, meaty game of Jenga. It was rich and oily but lacked depth; not a patch on Salt & Honey’s. Desserts were a mixed bag: praline profiteroles, made using the blend of chocolate created for the hotel’s 150th anniversary, were exceptional, the pastry having a satisfying amount of give, the filling thick and muscular. Iles flottante (“floating islands” of meringue bobbing in crème anglaise) came with an intricate mesh of sugar work but was too sweet, too one-dimensional. The apple tart was a write-off: singed around the edges, the caramelised fruit too viscous, the pastry dry and tough.

Palm Court's simple, classic dishes are rather at odds with the lavish dining room, but if you’re looking for grandeur on a budget you’ll find it here. And if you receive an invitation to afternoon tea, at least you know you’ll find something proper to eat.