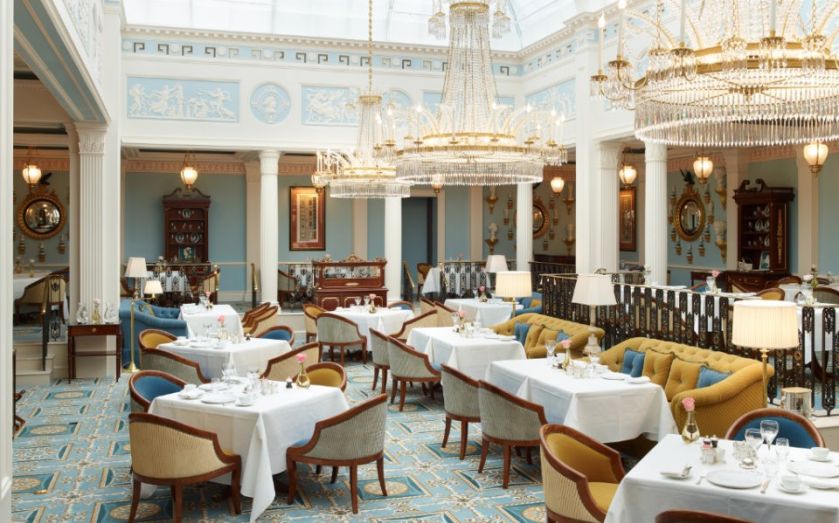 Céleste at the Lanesborough

9 Hyde Park Corner, SW1X 7TA Tel: 020 7259 5599
These are halcyon days for the London restaurant scene, a time when seemingly everybody is a foodie and every borough in London has at least half a dozen restaurants worth visiting. You can start to take it all for granted, to lose that sense of wonder at the singular pleasure of a well cooked meal. And then something like Céleste happens.

It’s the new flagship restaurant at the recently reopened Lanesborough hotel, which is now run by the same folk who own the grand old Le Bristol in Paris. Florian Favario is in charge of day-to-day cooking, under the auspices of three Michelin starred chef patron Eric Frechon; both are Le Bristol stalwarts who know a thing or two about modern French cuisine.

Céleste is still in its soft opening – a kind of beta mode for restaurants – and I was there on a Monday night, so it wasn’t a total surprise that I was the only guest. As such, it would be unfair to make a joke like: “Céleste? More like the Marie Céleste!”. I wouldn’t lower myself – if you want that kind of thing, go and read a more downmarket newspaper.

And anyway, those people who weren’t there – all of you who were merrily going about your lives on Monday evening, doing whatever it is that you do when you’re not eating at the Lanesborough – don’t know what you’re missing. Because Céleste is ri-di-cu-lous.

The décor is ridiculous, with its Regency-period opulence, all vast chandeliers and baby-blue Greco-Roman bas-relief friezes. Gilded mirrors line the walls, gigantic royal blue sofas take the place of banquettes, a domed glass ceiling rises above it all like a palatial circus tent. This is what bling looked like 200 years ago. You won’t find any candle-lit booths or low-watt light bulbs – everything is gloriously illuminated, the dining room revelling in its collection of shiny baubles. It’s a bit like a National Trust stately home, except everything is plush and new, and you don’t get shouted at for sitting on the furniture.

The food is ridiculous, every dish embellished with gold leaf, edible flowers and extravagant plate smears. It is, without question, the most exquisitely presented meal I’ve ever seen. A scotch egg, for instance, has no business looking pretty. And yet in Céleste, it’s a minor wonder, a tiny cauldron of yolk in a crisp, fried lardo shell. I only ordered it to see how you could justify charging £20 for an egg. Green and yellow striped ravioli encases whole pieces of langoustine. Blue lobster and crushed avocado, erected like standing stones around the plate, came with a glass teapot of gazpacho brimming with heirloom tomatoes and greenery. Ridiculous. Delicious.

Hay-cooked chicken – one of only three meat courses on the menu (the other three mains are fish) – was as tender as any chicken ever was. A green, violently salty smear of sauce dotted with girolles mushrooms gave it the calm air of a pastoral painting. The lamb with braised sweetbread and courgette couscous was excellent – smoky and rich – although more pedestrian in its presentation.

And then there was dessert. Pastry chef Nicholas Rouzaud, also over from Le Bristol, offers two of his signature dishes. “Hand-crafted strawberry” features molten sugar blown (as you’d blow glass) into the shape of a strawberry. It’s served on a plate covered in luminous sugar “grass”, complete with tiny sugar flowers. In fairness, it looked better than it tasted, which was like the outside of a very delicate toffee apple.

The guanaja chocolate is just as outlandish – an optical illusion of smeared chocolate forms concentric circles on the plate like the rings of a tree, upon which lies a hollow chocolate log filled with caramelised cashew nuts and a dollop of very good coffee ice cream.

The prices might be the most ridiculous part of all. For two, including a couple of glasses of champagne and a relatively bargainous bottle of wine (£70 is near the bottom of the spectrum, which probably goes all the way to infinity), the bill came to £335. Just like that – £335. Ridiculous.

The last decade has seen a huge democratisation of fine dining, with affordable restaurants offering proper haute cuisine and even the unaffordable ones letting in riff-raff like you and I. This is a great thing, and we should all give ourselves a big old pat on the back for being a part of it.

Céleste is a throwback to a time when fine dining was wilfully elitist. It feels like you’ve been invited into a rarefied theatre of excess, an Alice in Wonderland carnival of culinary ostentation, filled with more exquisite, lovely things than our tiny minds can comprehend. I’d say you should all go, but that would rather ruin it.