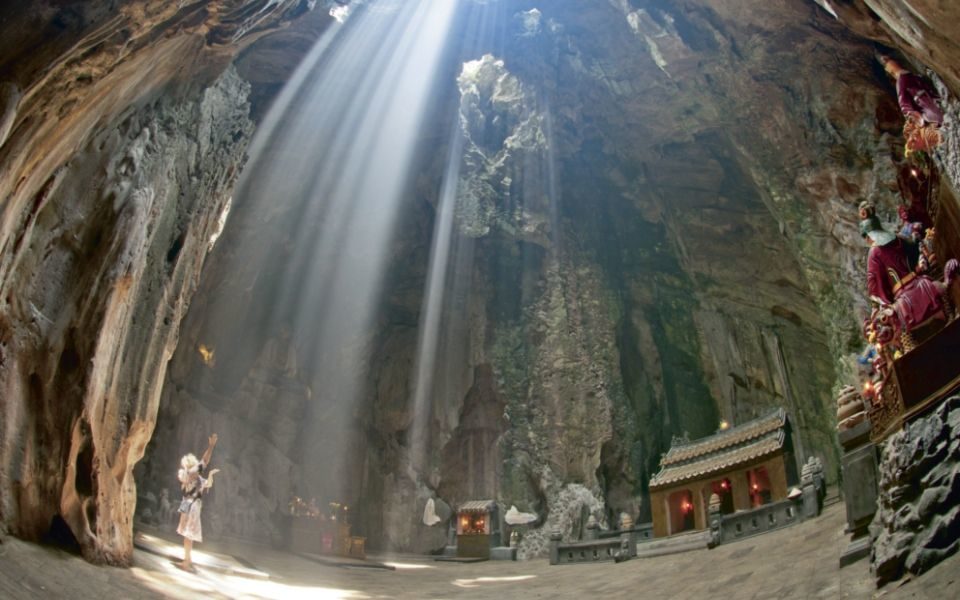 To tide us over until we’re able to travel again, we’re republishing classic travel stories from our archives. This week we revisit Laura Millar’s trip to Vietnam’s UNESCO heritage city Hoi An.

The narrow stone passageway opened into a small stone altar featuring the carved statue of a goddess. Was this a place of worship, I wondered, or sacrifice? At this stage it was hard to tell, but I was enjoying scaring myself. The shadowy passageway curved around again, this time leading to a set of steps heading downwards, with only faint beams of light reaching me. Then its source started to become apparent: a great gash in the rock below, and looking down through it to a paved floor I could see several others walking around.

The passageway is dug into the side of one of five limestone monoliths that tower above the town of Hoi An, in Vietnam’s Da Nang province. And as I descended to its ground level, I gasped. There’s a cathedral-sized chamber nearly one hundred feet high, a natural rock formation not visible from the outside. A couple of holes in the chamber’s roof let in daylight to what would otherwise be a dark and eerie cave, supplemented by ominous, flickering candlelight.

The entrance is guarded by two statues: fierce-looking warriors with red-painted skin and colourful, elaborate uniforms. One of them is sitting on what appears to be a giant, cute tabby cat (actually meant to be a tiger), which lessens the fearsome effect somewhat. Jagged rock loomed all around me, and in my mind’s eye, I imagined men in long, black leather coats about to prise open an elaborate, golden box, while Indiana Jones watched from behind a rocky pillar. I’ve never been anywhere so reminiscient of the Raiders of the Lost Ark.

This, however, isn’t the hiding place for Nazi loot, but an ancient temple dating back to the 17th century. And it’s tucked away in the centre of an edifice known as Thuy Son, named, alongside its four neighbours, after an essential element. (Thuy Son means ‘water’). Collectively they’re known as the Marble Mountains, due to the mineral found within the rock. At their base, hundreds of sculpture workshops peddle giant carved dogs, monkeys and fat, laughing Buddhas, none of which will fit in your hand baggage.

The mountains have a holy status, and this particular grotto, known as Huyen Khong cave, has hosted worshippers for centuries. It took on a different role during the Vietnam War, serving as a military hospital and shelter for locals. Those holes in the roof were made by US bombs. Emerging, blinking, into the sunlight, I spent the next hour wander-ing around Thuy Son’s impressive complex of temples, from elegant, multi-tiered pagodas, to low-slung, white walled buildings with upturned roofs. It’s full of twisty stone paths, that snake alongside sheer rock faces hung with dangling vines and foliage, ripe for swinging on, Tarzan-style, with dramatic views over the town from one of several viewing platforms at the top.

It looks like the setting of Tomb Raider, as if Lara Croft could come barrelling around a corner at any minute.

This region, like so much of Vietnam, blends history with the recent past. Many of its oldest sights are scarred, marked, or otherwise blighted by the sheer viciousness of war. This is starkly apparent in one of the area’s most prized tourist sites, My Son sanctuary.

A UNESCO heritage site, it’s like a more compact version of Cambodia’s Ankgor Wat. These temple structures have been around since the 7th century, built by the devout Champa people, who moved to Vietnam from Indonesia in 2AD.

Reached by a set of paths through lush forest dotted with acacia trees, gum trees and bamboo, the expanse of land that stretched out in front of me was impressive, as were the terracotta-red clay and sandstone structures, inlaid with elaborate carvings of multi-limbed gods, or creatures with elephant heads. The Champa were big on fertility rituals, so there are plenty of big stone phalluses knocking around, too.

The afternoon I visited there were hardly any other people around, which gave everything an eerie feel. It looks like the setting of Tomb Raider, as if Lara Croft could come barrelling around a corner at any minute.

Vast as the landscape is, My Son has suffered significantly from the war; it’s estimated that at least two thirds of the site was destroyed in 1969 by the Americans (some put the figure even higher, at 90 per cent). Still, what’s left is remarkable enough, but it’s crushing to think that what survived for centuries was wiped out in a matter of days.

On the way back to my hotel – the lush, sprawling Four Seasons Nam Hai in Hoi An – we drove through Monkey Mountain, aptly named by the Yanks who set up their military bases here after spotting loads of the critters in among the trees and long grasses. Driving up the steep road, we spotted old aircraft hangars used by the North Vietnamese army, and three giant, golf-ball shaped radar domes. This time Platoon was the film that came to mind, as we passed ditches and bunkers that could so easily have been used to hide military personnel.

You shouldn’t miss the sights in this hauntingly beautiful, cinematic region. Yes, it felt rather like a boy’s own adventure, but boy, did this girl love it.